The most difficult individual award of the winter, winning entry to The Order of the Hrimthurs, relates to achieving that prize. It is an individual recognition, the best kind, only available to those who do the maximum distances of the top three winter distance events whether on foot, skis, or fat tire bikes. Easy to say, but . . . . 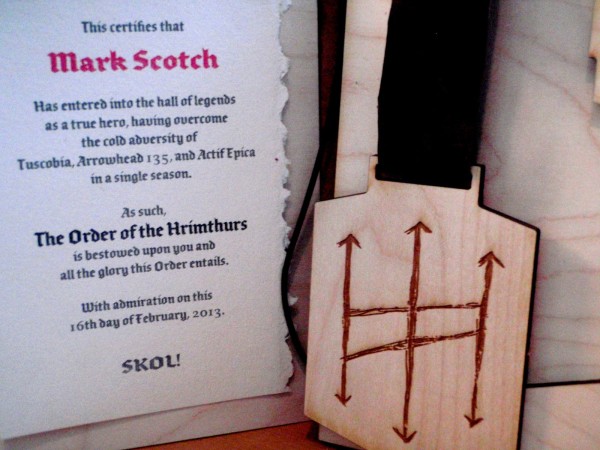 The Order of the Hrimthurs awarded to Mark Scotch

Hrimthurs—pronounced ‘rim thurs’—recalls mighty Frost Giants who exhibited clever, perhaps even diabolic, behavior in their delight as others suffer. Stamina remains a key point of the tribe along with courage and strength. Additionally it doesn’t hurt to have an ample capacity for tenacity and endurance along with a deep supply of self-knowledge helping defeat these admirable icy foes on floes, if they’re floating around somewhere. 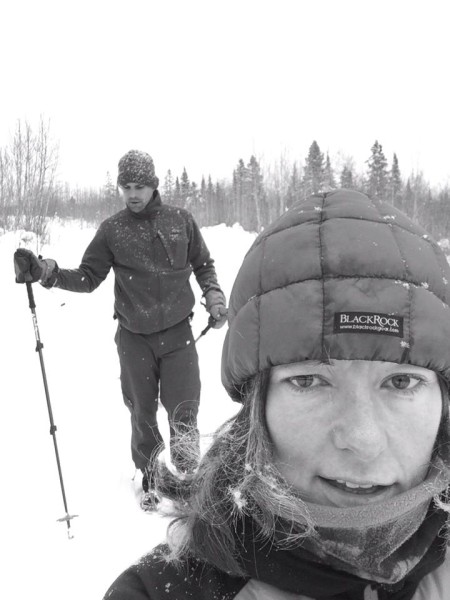 Chris Scotch following Helen, a noted winter endurance athlete in her own right. Also, the couple are the Race Directors at Tuscobia

One can’t buy the Hrimthurs Order though cost remains part of the game. Traveling to Tuscobia Trails in Wisconsin for the Tuscobia Winter Ultras, the International border of International Falls, Minnesota, for the Arrowhead 135, and Winnipeg’s blast into the cold air Actif Epica costs real money. 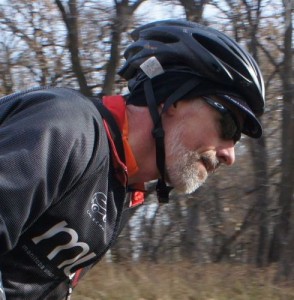 Further, the fees to enter the events, although fair, much less finishing these behemoths, ranks low on the expense list but do add up.

These endurance events with their long distances eat time like a kid chewing red licorice; a week seems a day. For those enjoying a regimented schedule at the office or business, setting aside the time to race is only just part of the equation. Getting permission for the time adds to the chore.

Then there’s the equipment requirements . . . but enough of that for the moment. Let’s celebrate those who earn the order, permanently finding their name engraved deep in the icy tombs of the Frost Giants, entering The Realm of Legends. 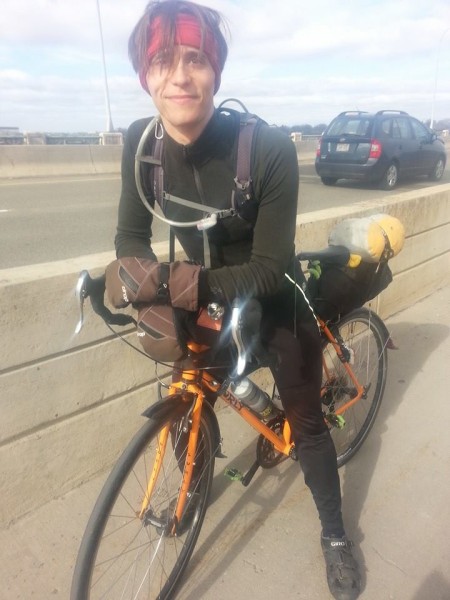 The Order describes this group as ” . . . the brave, the true, who have conquered winter’s mighty fist. They have slain the Hrimthurs.”

The inaugural year, 2013, five legends braved the three dastardly challenges and all that implies to earn the listing:

The Norse Gods allowed none to earn the hallowed frozen hall. 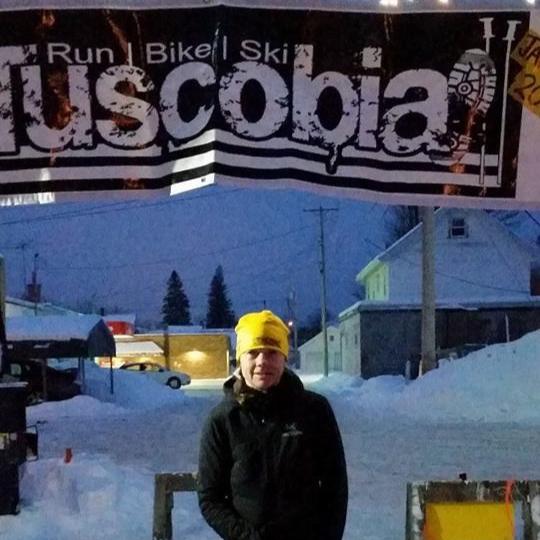 Sue Lucas at the Tuscobia finish line. She is on the roster for the 2016 Iditarod Trail invitational 350 Mile Race (foot).

Actif Epica provides five principles for their race. These commandments of a sort also apply to the other two of the Triple Crown of Winter Endurance Racing, Arrowhead and Tuscobia.

∙  Human powered – bike, walk, roll or slide.  Use the power inside you.

∙  Open and inclusive – Actif Epica is an accessible event that welcomes new friends and new experiences (note: this includes promotion of the event in both French and English—and hopefully Michif too).

∙  Applied ingenuity – ours is one of the most extreme climates on the globe, and through creativity, adaptability and pluck, we have learned to make the most of it.

∙  Celebrating place – our culture and landscape are unique and special—and they are profoundly integrated with who we are. 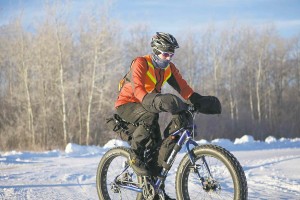 As a note, Michif (above) evolved as the language of Canada’s Aboriginal people. The language combines Cree and Métis French with other additions to complete its vocabulary. In noting a language spoken by under 1,000 people globally, one understands the drive led by Actif Epica to really mean the words “open and inclusive.”

If you complete Tuscobia’s 150 miles successfully, a note similar to this sent to Mark Scotch will mysteriously appear in your mail:

“We applaud these warriors who have been sufficiently brave to conquer all 150 miles of Tuscobia, and now show the audacity to embark on the second test—next week’s Arrowhead.
Arrowhead’s hills have ground many a giant down, and many mortals have been reduced to weeping bitter tears of rage—will these fifteen prevail? By Odin’s beard, we will be watching. Those sufficiently cunning, skilled and fated to succeed at Arrowhead may seek to undertake the final test. Actif Epica’s cruel winds will challenge them northward. These are flighty winds, known to inflict brutality upon those who treat them as mere wisps. Racers only need to complete 82 miles at this test, but the winds will be rushing from thousands of miles across the prairie to meet them head on. Who can best them? 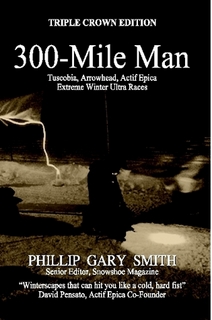 The Order of the Hrimthurs, Norse Gods among other of Winter’s honors and battles find their way into 300-Mile Man.

For those taking the next step towards the Order: may your steps at Arrowhead be as large as the Hrimthurs, whose ranks you wish to enter and may the wolf tracks guide you ever forward.
For the rest of you, may this season be the beginning of your training, the start of your preparation to seek honor next year, and may these 15 be your example.”

Afterward, for Actif Epica, look for this note:

“The weather was warm—too warm to truly test those who passed the challenge at Tuscobia. And so, when it began to look easy, we called on the snow and the sleet to soften their path. Let them work for it bitterly, or the glory will not be as sweet.

And yet, nearly all passed. And those who didn’t, pushed the limits and showed true bravery in the face of what we threw at them. We have no doubt, they will one day enter The Order. But for now, there remain only 11 that may pass by overtaking the challenge even further north, closer to our dwelling: Actif Epica.

These sufficiently cunning, skilled and fated heroes succeeded at Arrowhead and now may seek to undertake the final test. Actif Epica’s cruel winds will challenge them northward. These are flighty winds, known to inflict brutality upon those who treat them as mere wisps. Racers only need to complete 82 miles at this test, but the winds will be rushing from thousands of miles across the prairie to meet them head on. Who can best them? 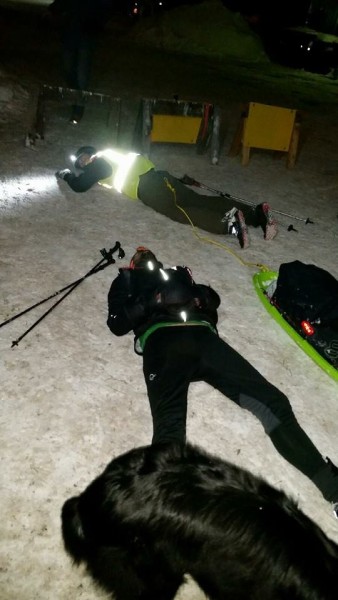 At Actif Epica, you will know the full strength of adversity. On the plains there is nowhere to hide. These are wild lands, untracked and little traveled. Giants will rise, mere mortals will fall. We are ready for you. For those taking the final challenge of entry: may your steps be as swift as the wind that meets you and your resolve as stubborn as the glaciers that carved this land.
Forward!”

Mark Scotch provided an essay in The 300-Mile Man Triple Crown Edition offering a unique vantage point from an Order of the Hrimthurs winner: “To me it wasn’t so much the earning the Hirmthurs award but more the process, which was where the satisfaction came from. Committing to entering all three races was committing to accepting what old man winter decided to throw out across 2 States and a Canadian Province from the beginning to the end of the 2012/2013 winter season.”

As David Pensato so eloquently captured in his timeline descriptions as the individual races came and went, each possesses its own unique challenges for one to prepare. 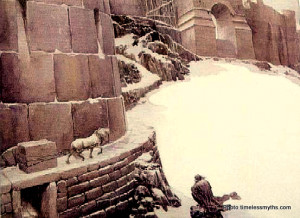 Surviving until falling at the walls of the icy kingdom

This certifies that [your name; hey, think about it] has entered into the hall of legends as a true hero, having overcome the cold adversity of Tuscobia, Arrowhead 135, and Actif Epica in a single season.

As such The Order of the Hrimthurs is bestowed upon you and all the glory this order entails. With admiration on this 15th day of February, 2016 [Think ahead!]. SKOL! [not a football yell, but rather an exhilarating recognition of your victory over the elements, a drink from the cup of challenge, and good health. Sounds like a good plan for daily life, too.]

When to start training to enter the Hall of Legends by finishing all three of these winter ultra races? Many never stop . . . but now seems appropriate for sure. Enter events that will test you at distance, practice pulling those old tires around and up-and-down, start collecting the gear required, and go for it. The races will all likely fill their field limits. Stay up with each website so you can get the entry in . . . don’t delay and face disappointment. There’s enough possibility of that on those long, cold, bitter nights coming this winter.