It is a common misconception that Manitoba is a land of farms and wide-open prairies. The truth is, Manitoba is a varied land – sure there is farmland and prairies, but they make up but a small portion of the province. Manitoba’s landscape is a cornucopia of geographic features, with numerous lakes and forests, valleys and rocky outcrops. North of Winnipeg, the provincial capital and largest city, lays the Interlake Region – an area bordered by Lakes Winnipeg, Manitoba, and Winnipegosis. Here the farmland that is predominant in the southern region of the province gives way to mixed forest. The landscape is scarred by boulders, remnants of the glacial Lake Agassiz’s retreat thousands of years ago.

The Narcisse WMA lies approximately an hour north of Winnipeg, in the heart of the Interlake. Covering an area of 11,882 ha, the WMA is best known for its snake population – Narcisse is home to the largest concentration of snakes on the planet, with as many as 70,000 red-sided garter snakes taking up winter residence in the limestone caves below the frost line. But the mixed forest and limestone escarpment is also an ideal place to spend a winter’s day snowshoeing. 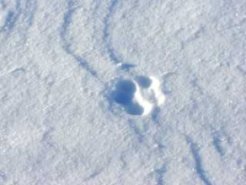 In spring and fall, the WMA is crawling with visitors to the snake dens, but since it is not serviced in winter, you’ve pretty much got the area to yourself. But despite the lack of people (and snakes) in winter, you are not alone – the Narcisse WMA is teaming with life; the signs are all are all around. A herd of 1000 white-tailed deer call the WMA home for the winter. Signs of their presence are everywhere, as their trails crisscross the WMA. You can also see where they have cratered through the snow in search of food and shelter from the cold. Their numbers are such, that a deer encounter is the norm and not a rare experience in winter.

If you listen carefully as you traverse the virgin snow, you can hear the mournful warning howl of a coyote in the distance. Their tracks are also prominent and easy to follow, but they themselves remain rather reclusive and are generally heard but not seen. As you travel through the forest, there is also the chance that you will come across a roughed grouse or two as they burst from their hiding place in an explosion of snow. The WMA is also home to a small number of elk and moose.

To access the WMA in winter, be prepared to park on the side of the highway – the parking lot by the snake dens on the east side of PTH 17 is not cleared in winter and can be covered with a couple of feet of snow (or more). Personally, I prefer driving to Chatfield and heading west on PR 419 – there are a number of trails that lead directly off of the road on both sides. The trail near the snake dens runs is a 3km loop winding its way through mixed aspen forest and open grasslands and is fairly easy to traverse (the trail is well maintained with trees and bush having been cleared from the trail allowing for two people on snowshoes to pass in most areas side by side). The western section of the WMA is not maintained to the same degree as the snake dens, but if you don’t mind following a deer run of the main trails, there is plenty to explore. 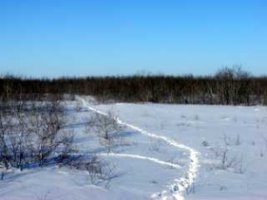 Temperatures can be down right nasty in the Interlake – on a visit last February, the mercury dipped to a frigid –37 C including wind chill – so dress accordingly. There is also very little in terms of services in the area, so bring what you need – lunch, a thermos of coffee, cell phone, etc… But a winter trip to the Narcisse WMA is certainly worth it. The snakes may be the reason most people come to Narcisse, but the snowshoeing is well worth a winter daytrip.

The Narcisse WMA is located roughly 100 km north of Winnipeg. From Winnipeg follow PTH 7 north to Teulon (45 km), then turn northwest on to PTH 17 for an additional 45km to the hamlet of Narcisse. The WMA is located six km past Narcisse, but you can also continue on to Chatfield and turn right (west) at PR 419; the WMA straddles the road here and there are trails and access points on either side. Just remember, the WMA is not serviced in winter, so you are basically on your own out there. If you want to make your stay an over-nighter, take PR 231 (just north of Narcisse) east for 43 km (about half an hour), to the town of Gimli on the shores of Lake Winnipeg. Gimli boasts a couple of nice hotels (the Lakeshore Resort) and restaurants. You can also snowshoe along the shores of Lake Winnipeg, which is a fine trip all on its own. For more information about the Narcisse WMA visit: http://www.gov.mb.ca/conservation/wildlife/managing/snakes_narcisse.html.