This year the venue changed for the Badger State Games snowshoe races from the Nine Mile Swamp to Rib Mountain Elementary School nestled on the side of the most famous peak in Wisconsin, Wausau’s Rib Mountain. At its crest, the four-mile long granite rock known as Rib Mountain stands 1924 feet above sea level and has the greatest margin above its surrounding terrain in the state, 670 feet. The 5-kilometer and 10-kilometer races took place running along the snowshoe trails on the south side of this great hill, whereas on the other side of the ridge skiers were enjoying their day on the  Granite Peak (the commercial name for the famed hill).

There were 84 competitors in all that completed races on this enjoyable weather day (20 to 25 degrees F with no wind) on Sunday, January 30, 2011, with some finishers counted twice.  Of these 84 athletes, some chose to race in the 1-mile race and then additionally either the 5-kilometer or 10-kilometer event (see picture of the start of these races, photos courtesy Adam Speer).

The first race of the day after the Youth 400 meter race was the 1-mile competition that 29 racers took part in, 19 males and 10 females.  This was held in the flat field in the backyard of the elementary school, and consisted of a figure-eight loop which was great for spectators.  Edgar’s Michael Wenzel, 23, took off sprinting and immediately put a significant gap on everybody behind him. 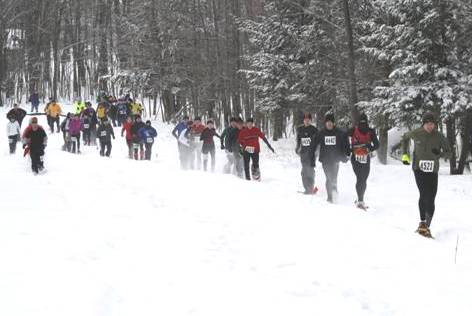 Shortly following was Catawba’s Kyle Schmidt, 36, who tried to stay with Wenzel but later fell back dealing with the softer snow in the field.  Kronenwetter’s Kris Borchardt, 31, made up an early 10-second gap on Schmidt and passed him late in the race to move into the second position.  Wenzel won the race in a blazing 7:53, with defending champion Borchardt taking second place holding off Schmidt, 9:07 to 9:10.

Edgar’s Andrea Mueller, 32, was the overall women’s 1-mile champion crossing the line in 10:23 (see picture of her championship form), a comfortable margin ahead of Phillips’ Kristi Speer, 29, finishing second in 12:18.  Eau Claire’s Pamela Ogden, 54, took the third spot for the women in this event, completing her race in a time of 15:05.  This race was mainly single-track with soft-packed powder along the figure-eight loop.

The 5-kilometer and 10-kilometer racers started together, and their launch was straight north up Rib Mountain for at least a 5-minute surge before turning off on some downhill sections that led to many more challenging climbs and drop-offs.  There were kilometer signs marked off on the course, with wild variations on the splits due to the sharp inclines experienced on the loops.  The 10-kilometer racers did a different second loop that involved so treacherous of a climb that even the best racers had to walk for several minutes on the incline to save energy. 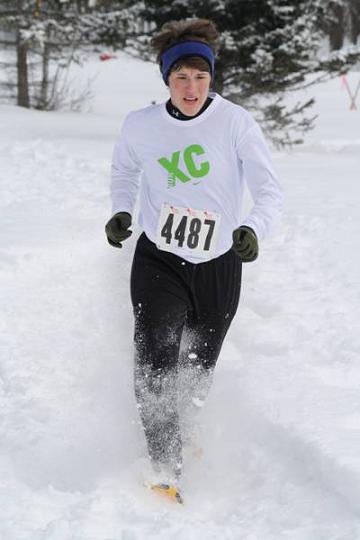 The overall champion of the 5-kilometer event was Borchardt, winning this race for the second time in three years.  He started out in front and had Schmidt and Medford’s Bill Bellendorf, 41, following close behind in the first kilometer of the race.  Borchardt opened up a 30-second gap early on, but Schmidt and Bellendorf closed that to within 15 to 20 seconds on the back-and-forth climb leading up to the 3-kilometer mark. But at this point the course became steep in downhill sections, and Borchardt pulled away leading to a significant margin by the finish, as he was aggressive in the final two kilometers.  The final few minutes of the course for both races involved the steep downhill section that they had to climb to start the race.  Borchardt’s winning time was 28:07, which was 1:32 ahead of Schmidt placing second with a time of 29:39.  Bellendorf was close on his heels, taking third place overall and crossing the finish line in 29:53.

Bellendorf was happy about his race but also talked about an unfortunate incident, “I was gaining on Schmidt on a downhill section late in the race but then I tripped and had a big fall – I yelled out when this happened.  I would have been a lot closer as I was gaining ground on him before this occurred.”  Bellendorf has been improving a lot in his snowshoe races over the last couple of years, and may soon be beating Schmidt outright.

The women’s 5-kilometer race saw a closer finish among the top three.  There were nineteen women in this race, one more than the amount of men doing the 5-kilometer, for a grand total of 37 overall in the race.  Speer defended her 5-kilometer title from the year prior, winning the race in a time of 37:58 (see picture of her finish).  Her margin of victory was by 38 seconds over Medford’s Carmen Quednow, 42, who took the second position in 38:36.  Westboro’s Patty Thiede, 42, was shortly behind taking third place in a time of 39:17.

The 10-kilometer race saw some great achievements, which had eighteen brave souls partaking in the event, thirteen of them men.  Wausau’s Mark Beversdorf, 37, held back on the first climb behind the early leader Wenzel, who was admittedly tired after his 1-mile event win. By the start of the second kilometer, Beversdorf caught Wenzel, and they ran close together for the first half of the race.  Shortly after the death climb where walking was involved, Beversdorf began pulling away from Wenzel in the second half of the race and comfortably won the 10-kilometer race by a margin of 1:36 (see picture of Beversdorf streaking down to the finish area). 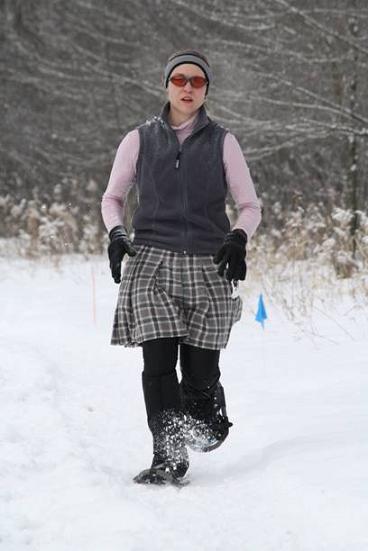 Beversdorf’s winning time was 54:19 with Wenzel hitting the line in a very respectable 55:55 in second place.  Westboro’s Mike Quednow, 47, was ahead of the next pack, taking third place in a time of 1:02:51. Quednow’s Garmin running watch let him know how daunting those climbs were.

“On my fastest downhill my pace per mile stated I was running around 5:40, but on the worst climb I was going slower than 25-minutes-a-mile”.  That tells how treacherous the Rib Mountain snowshoe course is, with wide lanes for single- and double-track, but it’s also known for its deflating inclines.  You can get some really good momentum going on the downhill sections, but then get stopped in your tracks with climb after killer climb.

Mueller defended her women’s 10-kilometer title, now having won this race three consecutive years, and adding another win to her repertoire for the day.  Mueller’s winning time was 1:11:59, which was 1:26 ahead of Medford’s Michayla Heil, 18.  Heil finished in 1:13:25, with a significant lead on third place, Marshfield’s Danielle Berger, 20, traversing the course in a time of 1:21:40.

Joel Braatz and Jay Punke were the co-commissioners for the Badger State Games snowshoe races, and they did a great job in designing and setting up some tough courses.  It is known that Braatz likes making courses as diabolical as possible, leading to some devilish climbs encountered on the day.  Braatz and Punke also made time to race in at least one of the races as well, with Punke winning the 10-kilometer Mountain Man event (as he usually does).

There were awards ceremonies after each of the races, with greatly detailed medals showing the event’s logo.  The Badger State Games continue to reside in Wausau with its location being moved around the last few years but, for now, finding a home on the south side of Rib Mountain.  A local television station was out to film part of the race showcasing one of the most challenging events of the Badger State Games.

This race is a part of the Braveheart Snowshoe Series:
www.uppermidwesttrailrunners.com
www.cutemoose.net

Any comments or thoughts about this race or story?   kris@snowshoemag.com. 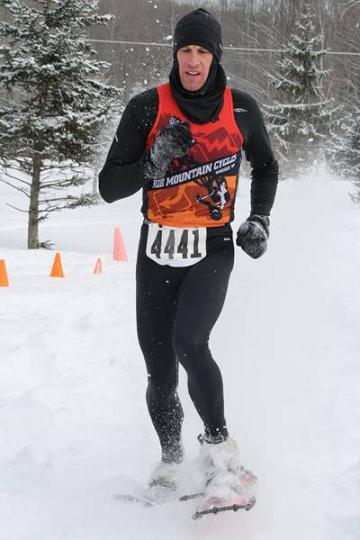