With about 760 participants and 60 teams arriving from as far away as Long Island and as close as Rutland and Wardsboro, Saturday’s Susan G. Komen and Tubbs sponsored Romp to Stomp out cancer snowshoe race, was a rousing success.

Participants were warned to dress warmly because of the extreme low temperatures forecasted, and indeed, while the day dawned a clear, perfect Vermont-in-January day, temperatures did not go above 4 degrees before the race was finished. But smiles and laughter and perhaps a few tears in remembrance of friends, mothers, sisters, aunts or grandmothers lost to breast cancer, were the order of the day, as teams arrived to check in and register at the Stratton Sun Bowl ski center.

The base area slowly filled with brightly colored, everyone wearing something-in-pink, women and their men, husbands, fathers, sons and brothers, sporting T-shirts and signs with team names like Anna’s Bananas and Susan’s Monkeys, Bosom Buddies, Breast Friends Forever, Freezin’ for a Reason, Hot Totties, Northeast Frosty TaTas, Romping Stomping Herd of Turtles, Snow Us Your Boobies, Sofonda TaTas, Tough Titty and Trudging for TaTas, to name some of the more colorful team names.

While the event was brightly colored, and everyone showed up to have fun, underlying the gaiety was a heart touching awareness of the rising statistics of women with breast cancer (one in eight women are diagnosed each year), and continued need for research to be funded, as an imperative to change. As happens when dealing with something so grave and so personal to everyone there, the names of the teams and some of the costumes put it right out there – this is about boobies. This is about “second base.” This is about mothers, daughters, aunts, sisters and friends. And everyone participating had a unique story that was heart-rendingly moving. No one escapes untouched when someone you know is diagnosed with the disease. 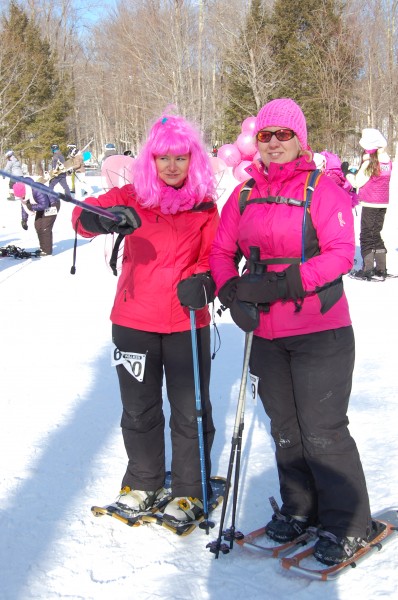 And poignantly, there were plenty of men there too, in almost equal numbers, as young as five years old and as old as 78 — for their lives had been touched as well.

Steve Arsenault of Templeton, MA, looked a bit like Gandalf, all in white and with white hair streaming over the collar of a thick, terry-cloth bathrobe, sporting a white top hat with a pink cancer ribbon pinned to the front.

Team Tatas, who named themselves as we spoke and sported tiaras and pink hats and star sunglasses, was made up of fifteen men and women, ages 11 to 78 years old. They said they had three breast cancer survivors among them, it was their tenth year of racing, and they had raised $1,700.

Lone entrant, Lucinda Chuey of New Canaan, Connecticut, said she and her family had come to Stratton to ski the mountain. “I saw (the event) very last-minute. I sent them off, and came right over and registered.” She “plopped down everything that was in my pocket,” and entered the 3K Fun race. Dressed in purple, she said she was racing for her friend, Victoria, who “loved purple,” who had died of breast cancer.

Chuey said she loves anything that involves running, and while she had never been in a snowshoe race before, and wasn’t sure how she would do, she was going to do it for Victoria. She ended up coming in fourth place, and with a big grin on her face as she sat on the ground afterward, panting, said, “That was great fun! It’s harder on snowshoes,” laughing, continued, “She would’ve loved this,” a bit of a choke in her voice. 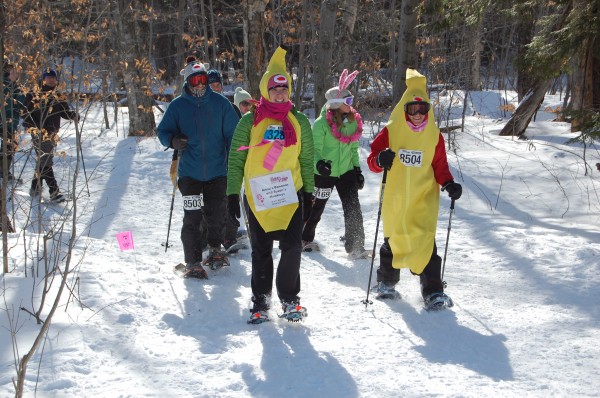 There were survivors as well. For Tricia Kilcommons , a four-year survivor and “going strong,” of the Wardsboro Walkers, this was her first year. She said she brought her niece Emily. But, “Emily forgot her coat,” Tricia laughed. “It’s a lucky thing I brought” extra clothing, she said. Their team raised $1625, of which Kilcommons raised over $200. They were the last ones to start the Benefit Walk, but the smiles said this was a celebration of life, a day shared between Aunt and Niece, and precious to both.

Top fundraisers Team Cook with Love had entered last year “with only two weeks to fundraise,” according to team leader Alicia Ifshin, and this year raised $41,510. This time, they had a whole year to raise money, Ifshin said.

“My mother died a year and a half ago, of breast cancer. She was diagnosed two months before. “It was very quick.” Ifshin said her mom, an Italian-Irish woman, loved to cook, and spending most of those last months getting treatment, “… didn’t have time to cook.” 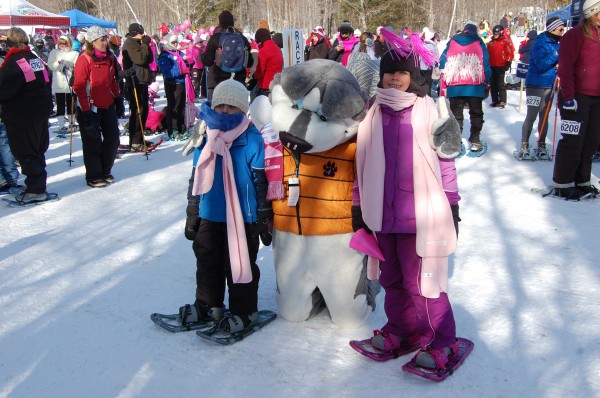 This inspired Ifshin and her family and best friends decided to make good on a long time dream they’d had, while there was still time.

“We had always wanted to do a cookbook with all her home recipes we knew and loved,” Ifshin said. “As a kid, I remember no one ever said no to my mom to come eat. You changed your plans.”

Ifshin said she and her family and friends kept asking her mom for they recipes they remembered and loved, and they wrote them all down. Following her mom’s death from breast cancer, they “went on a mission” to create a cookbook with all these favorite recipes, asking everyone to email stories they remembered of her mom’s cooking. The name of their Romp to Stomp Team, came because, “My mom said, ‘It’s not just cooking. You have to cook with love.’”

This year, Ifshin said was very special. They brought the first copies of the cookbook with them to give to their twenty-three team members, made of “…me, my daughter, my sister-in-law and nieces, and good girlfriends — everyone who ate her food.”

“This year we had a whole year to raise money, and we said, ‘this is going to be fun.’” And as with so many stories that day at Stratton, it wasn’t just about the fundraising, or the race, Ifshin said. “It’s about nurturing the bonds between mothers and daughters,” doing something fun together, treasuring each other. 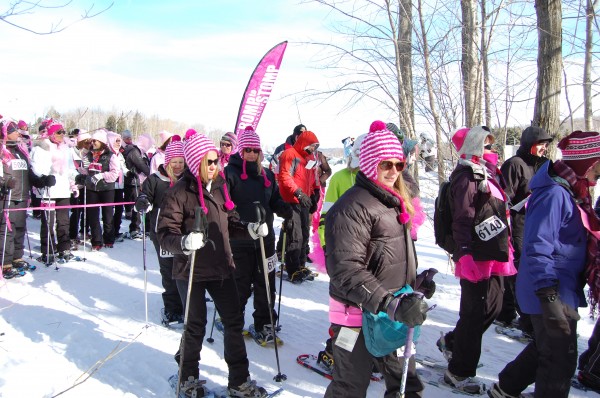 At one point, two little rompers received rousing encouragement as they ran the Lil Rompers Dash in full view of the crowd on their teensy snowshoes. In true sportsmanlike fashion, the young lady whose little brother was having trouble, waited for him to get up and in spite of his obvious embarrassment at doing what all snowshoers are prone to do, tripping and falling, he finished and they crossed the line together to cheers. The Tubbs Mascot was there to greet them , and finally a smile could be seen peeking from beneath his layers.

It was clear there were some who raced who still bore thoughts of a lost loved one heavy on their minds, finishing with a determination and effort it was difficult not to admire.

But by enlarge rompers and stompers arriving back at the finish two by two and in groups of friends and families of all ages, amid cheers from the crowd, put on a burst of pure showmanship, arms raised and with satisfied smiles, announced, “We did it.”

Top second and third top team fundraisers for the Susan G. Komen Foundation for the Stratton Romp and Stomp were Five For the Girls raising $16,042, and Team P-Ruby with $7,767.20.

The three top individual fundraisers were Alicia Ifshin of Cook with Love, $21,599, Brenda Estella of Five For the Girls with $6,050.00, and Susan and Erica Mack of Cook with Love who was able to raise $3,100.

For more information about Tubbs Romp to Stomp, visit http://tubbsromptostomp.com.

To see all the photos from the event, click here.