What Did Snowshoes Look Like in the Northern Colonies of New France?

The French colonial officers, troupes de marine, and missionaries residing in the northern colonies of Nouvelle-France were the first Europeans to add indigenous snowshoes to their inventory of winter kit. Writing for an Old World audience in 1603, Samuel de Champlain was at pains to emphasize the everyday necessity of this distinctively Native American item:

In the winter when the snows come heavy, [the First Nations] make a kind of raquette which is two to three times larger than those in France. Using them they travel on the snow without plunging through; otherwise they could not hunt, nor many places go at all.1

This brief historical note is meant as a point of departure for reconstruction of the snowshoes worn by those Native peoples and the French colonials. It builds from three visual records of snowshoes, two of which were published in conjunction with accompanying textual descriptions.

The accuracy of the visual records should not be taken for granted. European images of the period    are often enough elaborated from previously existing images, if not straightforwardly copied. One can reasonably expect this to be less likely to be true of 17th and early 18th century depictions of raquettes à neige, though, given that babiche and wood frame snowshoes and illustrations of them were a true novelty on the eastern side of the Atlantic at the time.

This should not be taken to mean that the illustrations below, or even original sketches upon which they may have been based, were composed en pleine aire. They could very well have been from composed from memory, and/or by a second party artist drawing on an oral or textual description. As noted ethnologist William Sturtevant put it, “The moral is: illustrations are historical documents which must be criticized in a manner comparable to that required with written documents.”2

One manner of critically evaluating a set of historical documents is to assess them in light of one another, on the principle that testimony corroborated by additional evidence holds up much better in court than it does on its own. As it turns out, the snowshoes illustrated and described below do indeed share a number of commonalities. All would appear to share multiple design feature with what has come to be known as the “Montagnais style” snowshoe. 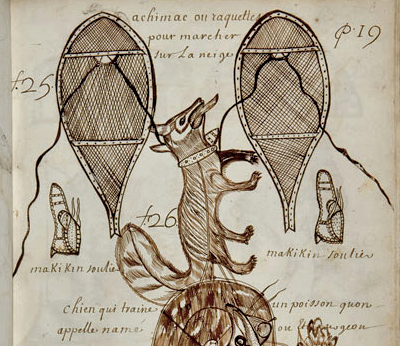 Detail from page 19 of the Codex Canadensis.

The beautiful manuscript by Louis Nicolas, S.J., which has come to be known as the Codex canadensis resides at the Gilcrease Museum in Tulsa, Oklahoma. The contents were recently made widely available as part of the McGill-Queen’s/Beaverbrook Canadian Foundation Studies in Art History series. The handsome volume is well worth a trip to your local library (or two, should an ILL request be required).3

1686: ‘New voyages to North-America’ by the Baron de Lahontan 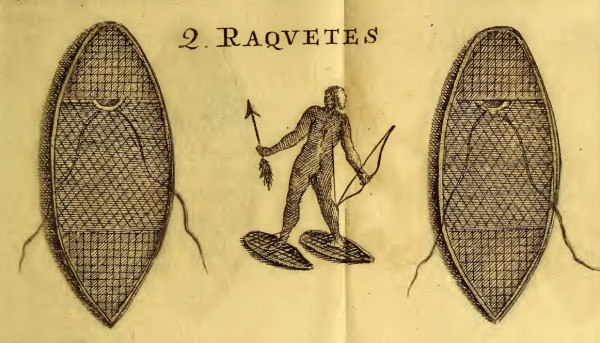 Snowshoes as illustrated in Lahontan’s ‘New voyages to North America’ (1703).

Lahontan gives a descriptive commentary of snowshoes in a letter dated 1686 found in his New voyages to North America. I have revised the revised the text a bit in the interest of accessibility.4

The hunting of elk is done upon the snow, with raquettes like those shown in the accompanying engraving. These raquettes are two and a half feet long, and fourteen inches broad; their ledges are made of a very hard wood, about an inch thick, that fastens the net just like a tennis raquette, from which they differ only in this—that those for tennis are made of gut-strings, whereas those for travel are made of little thongs of the skins of deer or elk. In the engraving two little spars of wood may be seen which run across to render the net firmer and stiffer. The hole that appears by the two straps is the place in which they put the toes and forefoot, so that it is tied fast by the two straps, which run twice round about the heel; and every step they make upon the snow the forefoot sinks into that hole each time they raise their heel. With the help of this contrivance they walk faster upon the snow than one can do with shoes upon a beaten path. And these raquettes are indeed a necessity for them, because otherwise it would be impossible not only to hunt and range the woods, but even to go to church (despite their living so near it), for the snow is commonly three or four feet deep in that country during the winter. Being obliged to march thirty or forty leagues [somewhere between 105–150 and 140–200 km] in the woods in pursuit of the above mentioned animals, I found that the fatigue of the journey equaled the pleasure of it. 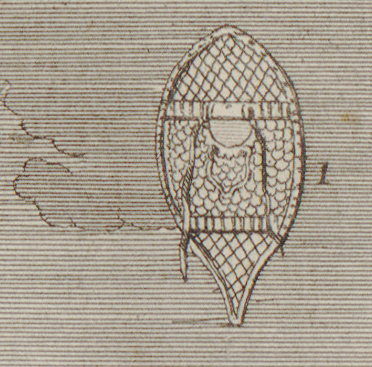 Lafitau’s prose is a laborious read for the most fluent and literate of Franophiles. (The great) William N. Fenton and Elizabeth L. Moore chipped away for decades at an annotated English edition of Customs of the American Indians; the text below builds on their translation.5

In snows through which no trail has been broken, they are obliged to make use of raquettes, without which every sort of journey, be it for war or for hunting or any other, would be absolutely impossible. The shape of these raquettes approaches the elliptical, that is to say, of an imperfect ellipse, more rounded in front than the rear, which is somewhat pointed. The largest are two and a half feet in length by a foot and a half in width. The frame is of fire-hardened wood and pierced along its circumference as with our jeux de paulme raquettes which they resemble, but with these differences: the lacing is of deerskin rather than gut, split very thin and left untanned, and woven more tightly. To render the body of the raquette more stable, two crossbars are inserted, which divides the lacing into three sections, the second being the widest and longest. Within this section of lacing towards the rounded edge of the raquette is found an arc-shaped opening, with the crossbar forming the chord, so to speak. This is so that the forefoot may be born atop the raquette without striking the crossbar and causing injury. A hole is found at both ends of the arc through which are passed the thongs used to bind the wearer’s foot to the raquette. These thongs are brought together as if to begin to make a knot at the toe, and after having been crossed, they are passed once again through the raquette at the perimeter of the arc; they are then taken back together above the heel, and from there brought to the instep, where they are knotted in the fashion of a ribbon. This is all done in such a way so that while the foot is securely bound to the raquette, it is attached only at the toe, and a hands-free exit is possible for the wearer.

In comparison with Montagnais style snowshoes

A comparison of Nicholas’s snowshoe illustration with one of a Naskapi snowshoe collected in Labrador ca. 1880 by Lucien M. Turner and a photo of a commercially-manufactured model currently available from Faber reveals multiple shared design features.6 These include: 1) the presence of a swallowtail, but of lesser length than used in contemporary Huron style snowshoes, 2) the presence of two crossbars, and 3) a semicircular rather than rectangular toe hole. 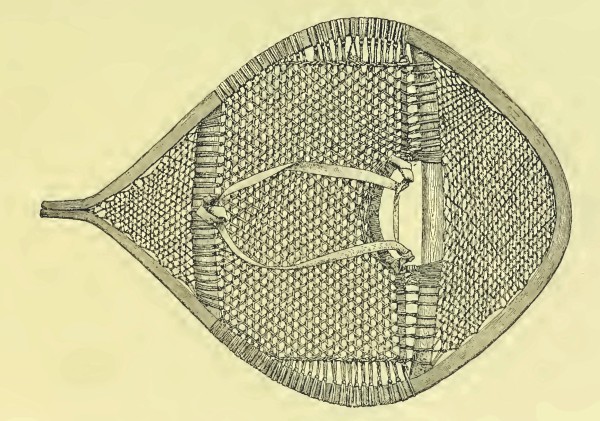 Lafitau was attempting, in his way, to be as clear as possible in regards to this third feature, the semicircular toe hole:

Within this section of lacing towards the rounded edge of the raquette is found an arc-shaped opening, with the crossbar forming the chord, so to speak.

His description references the geometry concepts of arc and chord:

I would suggest that he was describing a design feature akin to that seen in the contemporary Faber Montagny model shown below.

I would also suggest that the engraver, who, despite never having seen a snowshoe, was responsible for the depiction of the snowshoe in Lafitau’s Customs of the American Indians, was at a bit of a loss as to how to interpret this description, as the depiction shows one—and only one!—of the thongs passing through a hole in the chord (i.e., crossbar) rather than strictly “at both ends of the arc.”

The snowshoe depiction accompanying Lahontan’s New voyages is even less well-rendered than that in Lafitau. It does not explicitly portray (a) crossbar(s), for example. A semicircular toe hole is clearly visible, however. 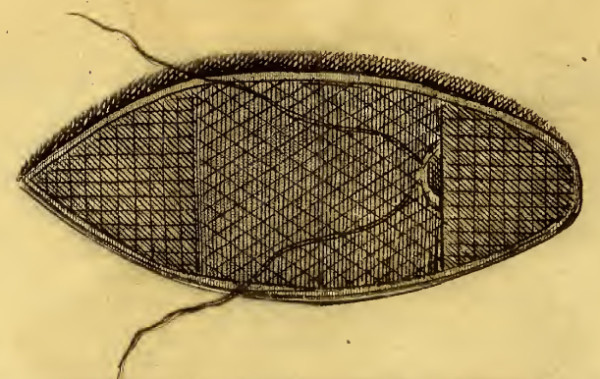 I don’t mean to suggest that the style now known “Montagnais” was the only sort of snowshoe in use through the early 18th century and that all other current variations are more recent innovations. It does seem interesting, though, that the three earliest detailed records I have been able to find all describe raquettes similar to today’s Montagnais variety. I should specify that I have done no archival or collections-based research whatsoever on the question; I have only consulted and attempted to interpret easily accessible published documents. What I have found so far does make for a nice hypothesis to be disproved via further research in the archival and material record.

3. The Codex is reproduced along with additional material by Father Nicolas in The Codex canadensis and the writings of Louis Nicolas: the natural history of the New World, ed. François Marc Gagnon, with Réal Ouellet and Nancy Senior (Tulsa, Okla.; Montréal: Gilcrease Museum ; McGill-Queen’s University Press, 2011). ↩