Recently I heard a French teenager decline an invitation to hang out with friends over the weekend because she was going hiking with her family. As I braced myself for the teen-typical eye roll and sarcastic remark about “family time,” I realized that she was actually excited about wandering through the woods with her parents.

It reminded me of one of the things I like most about France – the harmony between man and nature and the great respect people have for the landscape. The country’s peaks and valleys aren’t just for those in their physical prime; they are for families with children of all ages, the elderly who have spent the equivalent of years roaming the woods and for true athletes who enjoy the challenge of an adventure. 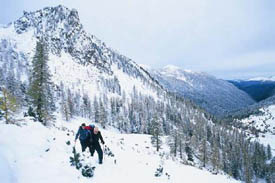 The paths unravel the history of the landscape and its people and reveal unique local traditions. Even on the highest mountain range walkers will find strings of refuges that allow them to rest in the evening with a shower, a good meal, a comfortable bed and an occasional sing-a-long.

Nowhere is this enthusiasm for nature more apparent than in France’s youngest national park. Mercantour National Park encompasses more than 800 square miles of mountainous land. It has 373 miles of marked footpaths, 28 villages and a wide range of trails for snowshoers. The park is divided into two zones: the peripheral, which contains the villages, and the core, which is strictly nature’s arena. The core can only be reached by foot, which makes it a peaceful place to wander, especially when blanketed in snow.

The elegance of the park is in its simplicity: water cascading down an 800-meter wall; an Ibex grazing on a rocky outcrop and an entire village turning up for a pistou soup dinner on festival day.

Tourism is so low-key that the 25-year-old park just north of the French Riviera is still relatively unknown. Park officials are content to let the masses cluster on the beaches of the Cote d’Azure. Tourism here is geared toward those who want an authentic mountain experience. The park’s curators say the goal is to create a “harmonious blend of protection, discovery, local development and respect of the traditional activities.” 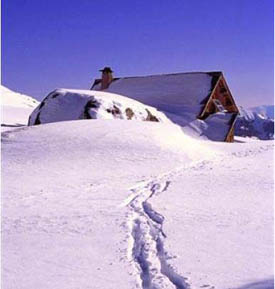 This effort more than anything enables visitors to experience a sense of evolution as they leave the perched villages on the park’s perimeter, pass through Mediterranean forests, moving past olive trees, hearty firs and finally glacial lakes and mountain peaks nearly 10,000 feet high. Visitors can explore the detritus of long lost civilizations and not so long ago wars.

Photography, tips and information courtesy of Space Between: http://www.space-between.co.uk.