Well, this wasn’t exactly the Muhammad Ali vs. George Foreman 1974 heated Zaire fight but this matchup in late January 2010 didn’t need Don King to promote this one.  This (USSSA Qualifier) Rumble in the Jungle was held at frozen Eau Claire’s Lowes County Creek Park in western Wisconsin, bringing in many competitive snowshoe racers from the Minneapolis area and western and central Wisconsin for the fourth edition of this race. This year the distances upgraded from a 5-mile and 2-mile to the
USSSA-Standard 10 km plus a 5 km. Swiss Miss once again sponsored the race (see picture of start courtesy www.mikeobrienphoto.com).

The 10 km was definitely the main event, with it being a qualifier for the USSSA Nationals on March 6th and with it being the only race with awards – the 10 km had 62 fast competitors, whereas the 5 km had 35 participants wanting to have a more casual snowshoeing experience. There was also a free mascot and kids’ race, where three mascots and six children sprinted a quick quarter-mile to the finish.

The 10 km race was fiercely competitive, with St. Paul’s Kelly Mortensen (last year’s USSSA Nationals runner-up – see picture accepting trophy), 38, taking the top spot with a time of 48:12. All of the top-10 finished within six minutes of each other. Ed Whetham, 33, took runner-up for Minneapolis with a 49:43, seeing over a minute-and-a-half gap in front of him and behind him at the finish. Woodbury’s Rob Class, 49, third overall, crossed the line in 51:23. He had a heck of a battle fending off Rice Lake’s Jonathon Delf, five seconds behind pace at 51:28. 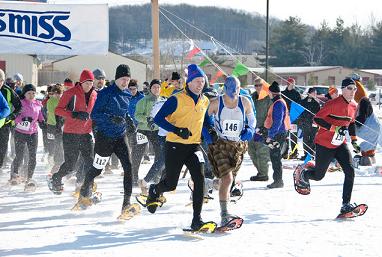 Kronenwetter’s Kris Borchardt, 30, had to navigate and negotiate past a lot of people to work up to fifth place in 51:44. This accomplishment is better understood when considering he arrived 20 seconds late to the line after the start and was caught behind the logjam on a mainly single-track trail, which made passing difficult, tiring, but fun. Eau Claire’s David Rosenberger, 37, last year’s five-mile runner-up, placed 6th overall with a time of 52:28.

Seventh through tenth place was the race of the day as four racers finished within seconds of one another: Eau Claire’s Bill Wonder, 53:26, Westboro’s Mike Quednow, 53:38, St. Louis Park’s Josh Jorde, 53:43, and Medford’s Jason Ruesch, 54:20. Ruesch was one example of how hard it was to medal here, as he was 10th overall but 8th in the 30-39 age class, an age group dominance not usually seen at most races.

Woodbury’s Jim McDonell, 56, who placed 12th overall in 56:01 (just 7 seconds behind 11th place Bill Bellendorf (40, Medford) – 55:54), created the Braveheart Snowshoe Series this year and commented on the specifics. McDonell stated, “We have about 50 people and 15 races in the series. There are eight people that have run three races already.  I got the idea after talking with Phillip Gary Smith (Senior Editor, Snowshoe Magazine), where someone else previously had a series (for snowshoe racers), and we wanted to restart it. We wanted to keep it simple – whoever does the most races wins a pair of Atlas snowshoes. It’s bringing in a lot of families to do it – it’s a good way to get a lot of people out and doing it.”

This was McDonell’s first time racing at the Rumble in the Jungle – you may recognize him as the man who races in blue and white face paint and short shorts and a singlet, even in subzero temperatures (see picture of the hard-to-photograph Braveheart, wearing his Braveheart Snowshoe Series jacket).  He claims that since he overheats so easily, he is able to get by wearing little clothing on race day.  He has now added a Scottish kilt to his race wardrobe – he is Scottish himself and visited the country of his heritage several years ago.  Another reason why he races in this fashion is so that he can feel like he is ready for battle, like the warriors did for his namesake, in the movie Braveheart. 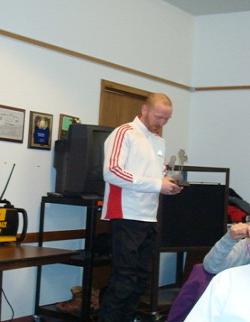 On the women’s side, a familiar face claimed a snowshoe race victory again, Edgar’s Andrea Mueller, 31.  She blazed the course in a time of 57:08, beating her nearest women’s competitor by over three minutes (see picture of Mueller holding her unique trophy).  Mueller has been snowshoe running and racing since 1996, so by doing this for 14 years now she definitely has a leg up on likely over 99% of her competitors for service time on snowshoes.  Mueller was modest about her race and experience, “Snowshoeing keeps me busy during the winter, (this will help me as) I’m doing a marathon in May.  The single trail here is nice and the winding stuff keeps you going, but it’s not easy.  I thought the temperature (around 15 degrees and sunny at the start) was nice, and it wasn’t too windy.  I’ve done this race three out of the four years, taking second to Cindy Brochman two years and three years ago.”

Co-race director Paula Dusick remembered Cindy Brochman. At the beginning of the awards presentation, Paula paid homage to this popular snowshoer after her sudden passing from cancer last month. Dusick also gave tribute to her husband, Tim, during the emotional speech. Tim founded this race in 2007 and it has become a memorial to him. He made snowshoeing popular in the Eau Claire area and started up this race before he was diagnosed and then later passed away from cancer in 2008. Mark and Emily Blaskey also co-race directed this event – Emily was seen gathering the results post-awards to later have them available online.

There were 43 men and 19 women who raced in the 10 km event. Minneapolis’ Emi Yasaka, 32, won second overall among the women in 1:00:38, a few minutes behind Mueller. Phillips’ Kristi Speer, 28, took the third spot with a 1:01:35. Minnesota’s Mary Palmer, 22, was fourth while Mary Ross-Mortensen, wife of the men’s overall winner, secured fifth. 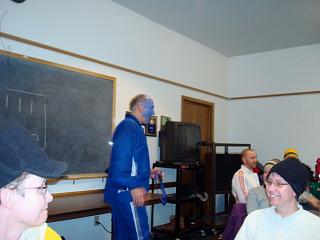 There were very unique trophies given out to the overall male and female winners, which were sculpted metal pieces attached to granite platforms, to be engraved with the winners’ names.  After the race, there was delicious pizza, and of course, Swiss Miss hot chocolate for all the racers needing warmth and nourishment after their hard efforts in the freezing temperatures. Event Sponsor’s Red Swiss Miss stocking caps were given out to the first 120 registrants, with Hammer gels and packets of Swiss Miss included in the goodie bags as well.

This race was one-of-a-kind, with reminders of the arcade game Donkey Kong with racers zigzagging back and forth on multiple levels at different points during the race, working their way up to the top on single-track hard packed trails. Passing proved to be difficult, taking the chance of tumbling down the mini-cliffs. Getting out fast to a good position in the first half-mile is key for this race; snowshoers who usually start slowly and move up were at a disadvantage here. That’s all part of the fun and strategy though, and there is definitely enough competition to run with on this distinctive course.

The 2010 results for this race should be available at www.indianheadtc.org/results.htm, where you would also be able to browse the 2009 results.

United States Snowshoe Association: www.snowshoeracing.com  results available and a listing of the qualified racers for the National Championships
Comments or thoughts about this race or story? 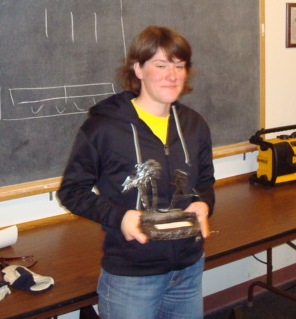