The Tubbs Snowshoes is showing its “Flex-ibility” off to good advantage with a new line of snowshoes.

The Flex line of molded plastic/polypropylene shoes caught my eye at the recent Nordic Fest at Southern Ontario’s Scenic Caves Nordic Centre recently. A quick conversation with Tubbs representative David Blasak followed, and within a week I had my hands on a pair of Flex TRK shoes to try out.

There’s a simple reason as to why I was so curious about the Flex line. For the last eight or nine years, my snowshoe of choice has been the now-defunct Salomon X-Adventure Access series. Anyone familiar with those shoes will see the similarity with the Flex line, which goes to prove that perhaps biologists have a point when they talk about convergent evolution.

After one trial with the Salomons years ago, I was impressed enough to buy a demo set within the next few days. Simply put, they were by far the most comfortable and innovative shoes I had ever tried, and that opinion hasn’t wavered much in subsequent years.

I wasn’t the only one embracing that opinion either. By the end of the season, I had purchased a second set, since I was only occasionally able to wrestle the first pair away from my wife Charlene. I don’t think she’s used any other snowshoes since then, while my use of my other shoes has dropped to almost nil as well.

Other than powder snow, the Salomons perform remarkably well under all conditions. The ratcheting harnesses have been a dream to use too, with nary a problem. They’re the easiest and most ergonomic harnesses I’ve ever seen.

The only knock on the Salomons that I’ve seen consistently is that the narrow plastic rib running down the rear half of the shoe can break. All I can say is that I’ve yet to have that problem with either set.

In my estimation, Salomon went off the rails when it discontinued the series several years ago, but Tubbs is doing its best to pick up the slack in that department with the Flex.

The pair I tried out was the 24-inch TRK model. With its aggressive crampons and overall similarity to the Salomons, I was very optimistic about the series. It didn’t disappoint, either.

I waited impatiently for a week or so to have enough snow on the ground to give it a fair test. I had tried them out at a local Provincial Nature Reserve, which can be counted on to have snow when virtually nowhere else does, but the snow was a hard-packed crusty/icy remnant that didn’t provide good conditions.

Mind you, the Tubbs handled that questionable snow pack with total aplomb. The shoes felt remarkably similar to my treasured Salomons once they were on, with perfect traction and excellent floatation.

The main difference was in the harnessing system, and that’s my sole criticism of the line. No matter how I look at it, the Tubbs harness is, in my opinion, inferior to the Salomon. 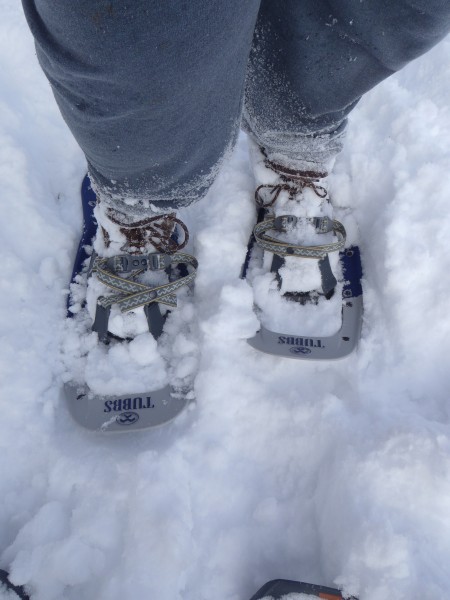 I’m very picky when it comes to harnesses. I’ve tried everything from the old leather style that I grew up with on traditional shoes to rubber pull-on versions and everything in between.

There are several reasons why I like the Salomon system so well. First, the footplate allows you to size the harness to the boot-by-boot size. That’s very convenient.

Second, the footplate features both a toe and a heel cap, improving the fit remarkably.

Third, the ratcheting toe and foot straps can be reached via the front of the boot, rather than a toe strap and a heel strap like most other snowshoes offer.

It’s just a personal idiosyncrasy, but I loathe heel straps on snowshoes, which always make me feel terribly awkward while I put them on. I just find it terrifically unwieldy to reach to the outside of my foot and try to simultaneously tighten and fasten the heel strap.

Even though its bad form, I sometimes, in total frustration, wind up wearing such snowshoes with the harness buckles facing inwards, just for the convenience of managing the straps.

I have a set of Faber snowshoes that employ such a system, and they drive me to distraction, which is one reason I rarely use them.

The Flex TRK features a toe strap that’s fairly convenient. The heel strap is the familiar rubber one that functions rather like a belt buckle.

Other than that, the Flex TRK is an awesome snowshoe.

Over the weekend, I received nearly two feet of fresh, powdery snow that called me outside to play like a siren’s song.

I chose to be organized and scientific about it, even going so far as to compare the floatation of the Tubbs verses the Salomons and the much-larger Fabers with a tape measure.

Interestingly, the Tubbs Flex generally nosed out the Salomons in those tests. The Fabers came out on top, which you would expect from a set of 10X40 shoes, with the Tubbs sinking in about two inches further. The Salomons sank into the loose snow another inch or two further, which surprised me.

So I took each pair for a spin for about a half-mile or so, breaking trail on the way and comparing impressions.

The Tubbs performed every bit as well as the Salomons once I got going. The grip was exceptional, and so was the comfort level.

I had my usual difficulties with the Fabers, which is exacerbated by the fact that I am extremely short-legged. I’ve always found it uncomfortable to use such large shoes, but since I am on the heavy side, I had little choice until the new hi-tech shoes caught on.

I’ve had a pair of 12X60 Ojibwa-style shoes since I was about 11, and they’ve always given me a raging case of snowshoer’s cramp. I haven’t used them in about five or six years now due to the discomfort level.

I’m over the recommended weight range of the Tubbs Flex shoes, but still found little difficulty using them in the loose snow. On a packed trail, they would be fantastic.

As usual, Charlene wanted to try them out as well. She also didn’t particularly like the harnesses and didn’t quite share my enthusiasm for the Tubbs.

“I don’t think they mold to your foot as well as the Salomons do,” she said.

While I appreciated the input, I also heaved a barely-audible sigh of relief.

This time, I though to myself, I might not have to buy a second pair.

Want to purchase a pair? 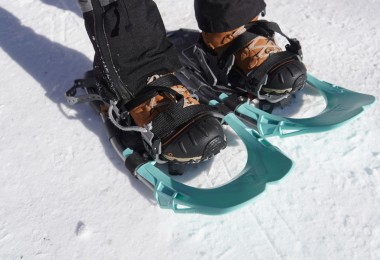 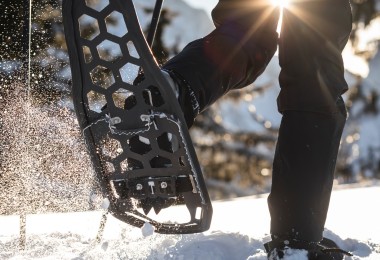 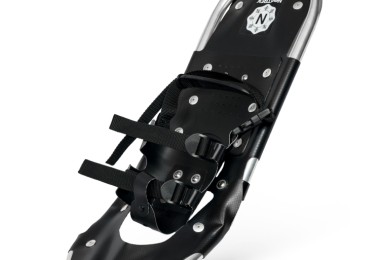