(This is a chapter extract from “For Fukui’s Sake” – published with the author’s permission.)

High up in the mountain folds above Ono, there sits a lonely lake. Clear, blue-green and contained by steep, forested slopes, it was one of the most magnificent I had ever seen. But I found that my appreciation for its splendour was not shared by the locals.

They say that beauty is in the eye of the beholder. Where one culture or one person finds attraction, others may find nothing, or perhaps even repulsion. I had already noted some of the differences between Western (or maybe just my own) perception of beauty and that of Japan’s; the fact that yaeba – double tooth – is regarded as kawaii – cute – and that the pigeon-toed shuffle that many Japanese women adopt is seen as attractive because it is deemed the feminine way of walking. But whilst it’s easy to understand differing views of what constitutes beauty in humans, never had I realised that appreciation for unspoilt beauty of the natural landscape could be a matter for debate. 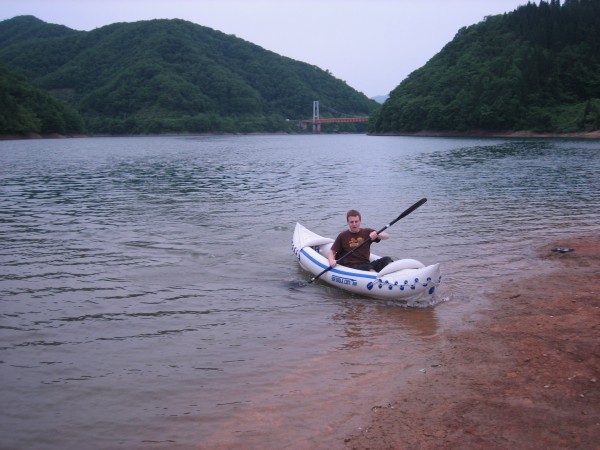 My first inkling that the beauty of Lake Kuzuryu was not being recognised was when I tried to track down a boat in which to explore it. Had such a magnificent place been located in my home country, there would doubtless be some enterprising local offering kayaks or rowing boats for hire, capitalising on the certain demand by visitors to take to the water and enjoy its exquisite scenery. But my investigations returned no significant leads on any rentable watercraft.

‘No Sam san, there is nowhere to hire boats. Lake Kuzuryu is not such an interesting place.’ said the maths teacher.

‘Boats on Lake Kuzuryu? No, I don’t think so. Nothing to see there.’  the sports teacher agreed.

But I had already seen that there was plenty to see. As I sat poring over a map in Yasu’s bar one evening, I gazed upon the lake’s numerous inlets and arms that were ripe for exploration. Looking like the cell body of a neuron, dendrites feathered from the elongated lake into hidden valleys of their own, only accessible by water. 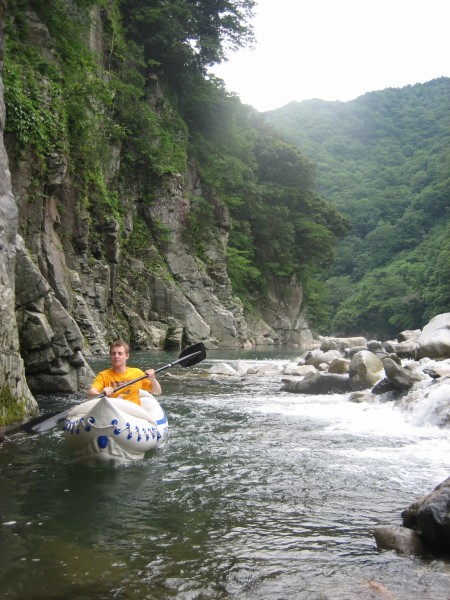 I supped on a bottle of Yebisu beer, peeling at the label that pictured a big-eared, fat little fisherman. I had to find a way to get out there. But even Yasu, overlord of Ono’s outdoor world, couldn’t help me this time. So for many months, I looked upon the lake’s loveliness from her banks only; she flaunted, I was taunted.

Determined to explore the lake by boat, I began looking further afield, turning to the internet for a solution. After several weeks of online research, I concluded that an inflatable ‘Sea Eagle’ kayak would be the perfect craft and ordered one from the USA.

Having done a fully inflated dry run in my lounge, I was ready to embark on my maiden voyage. One warm day, having been dismissed early from work, my chance came. Throwing the kayak, a bottle of Pocari Sweat and a packet of ‘Crunky’ almond-centred chocolates into my car, I set off eagerly towards the lake.

I pulled into the deserted camp ground on the lake’s shore, and within ten minutes, the kayak was pumped up and ready to launch. I bristled with excitement as I waded into the water. It was cool and clear, the bottom mud and rock. I hopped into the boat, slung my tatami flip-flops in too and began to paddle out. Finally, after months of questioning, searching and internet surfing, my adventures on the Kuzuryu could begin.

It was a warm day even up here in the mountains and just the softest of breezes stirred the surface. I paddled right out into the middle of the lake. Up ahead, a steel suspension bridge spanned the water. Named Yume no Kakehashi – Bridge of Dreams – it was apparently modelled on the famous Seto Bridge which connects the island of Honshu to Shikoku. Swirls of mist hung over forested peaks in the distance. The water was a brilliant blue-green but the lake was deep, and looking down into it, I could see nothing but darkness. 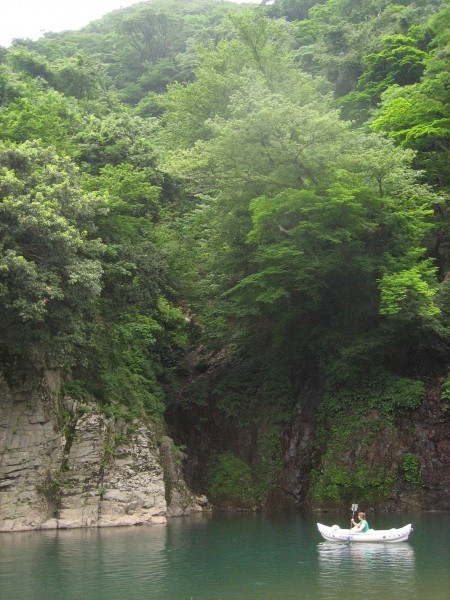 To my left, the wide mouth of an inlet loomed. I swung the bow of the kayak towards it and paddled on. I would explore the water beyond the bridge another day. To my right, I could just make out the signs of a logging road up on the mountainside that ran along the inlet for a stretch, then petered out. All was silent and eerily calm. There were no people, no fish and few birds. Black, drowned trees jutted out of the water, some standing surprisingly far out into the lake. Presumably once tall pines growing from now submerged mountain ridges, their skeletons added to the sense of desertion.

I paddled further up the valley. The mountains were lush green, sheer and plunged straight into the water. I had hoped to find suitable spots for future camping trips, but there was nowhere flat enough to have a picnic let alone pitch a tent. The tree line began directly above the waterline and no lakeside paths existed. For the first time in Fukui, I felt like I was somewhere truly wild. Not a person, nor power cable, nor concrete mountainside in sight. The paradox of course was that the very lake itself was man-made.

Up ahead, the valley was widening slightly. I gazed down into the deep water and thought about what Keiko had told me. Was I paddling over the roof tops and along the streets of a sunken village? The valley cut deep and it must have been a long way down to its dark bed. I peered over the side of my boat, searching for clues of this Japanese Atlantis. And as I gazed down into the darkness, something caught my eye. I stopped paddling. The boat glided in perfect silence. I strained hard, scanning the depths. There was something down there. And it was moving. Deep down, just on the very limits of visibility, a large, dark form glided beneath me. 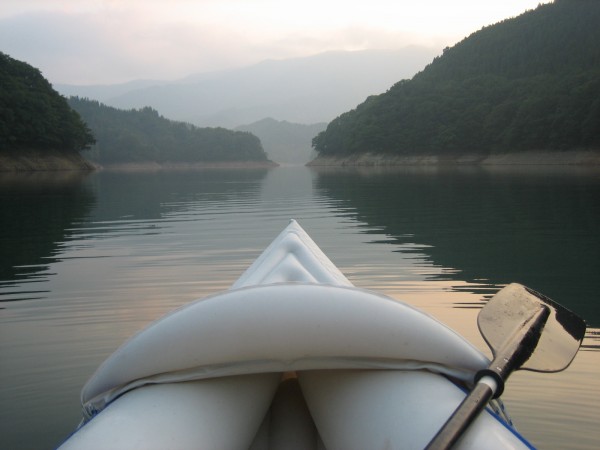 A sharp jolt of fear, the like of which I hadn’t felt since I was standing on stage in front of the entire school about to give my introductory speech, speared me. There was definitely something there. And it was big. A big, shadowy shape, bigger than my boat. Panicked, I strained to identify it, but the ghostly form sunk deeper and within a few seconds, it had descended out of sight.

Adrenalin coursed through my system. As someone with a strong interest in the natural world, all my accumulated knowledge told me that there were no creatures of that size living in lakes high in the Japanese mountains. So what the hell was it then? I had definitely seen something. Something larger than any creature that had any right to be in this lake. 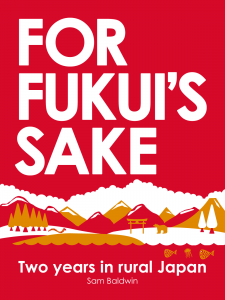 My brain scrambled for a reasonable explanation. It couldn’t find one. Then I remembered Keiko’s stories; the haunted lake. Was it some sort of water demon? After all, ‘Kuzuryu’ translates as ‘Nine-Headed Dragon’. No, of course it wasn’t a nine-headed dragon. Or even a one-headed dragon. But then what could it possibly be? A giant freshwater eel? A massively mutated sturgeon? A cousin of the Loch Ness Monster perhaps?

I paddled quickly towards the bank, but also as calmly as I could; I knew that large water-dwelling predators were attracted to splashing on the surface. I had also been a fool and broken a golden rule in the outdoor exploration book; I had not told anyone where I was going. If my ship went down, no one would come looking.

I kept peering into the depths, fearful of what I might see, but Kuzuryu had more surprises for me yet; other things were watching me from above the waterline.

For Fukui’s Sake is available from Amazon. For more information see: ForFukuisSake.com.