Let’s say the forecast is mid 90’s with full sun and not a cloud in sight – what do you want to do? I know, let’s go run 100 miles! Oh, and let’s not make it that easy. Let’s throw lots of climbs in, let’s go to a higher elevation with less oxygen, and let’s not forget about the dirt trail with more than enough rocks and roots! 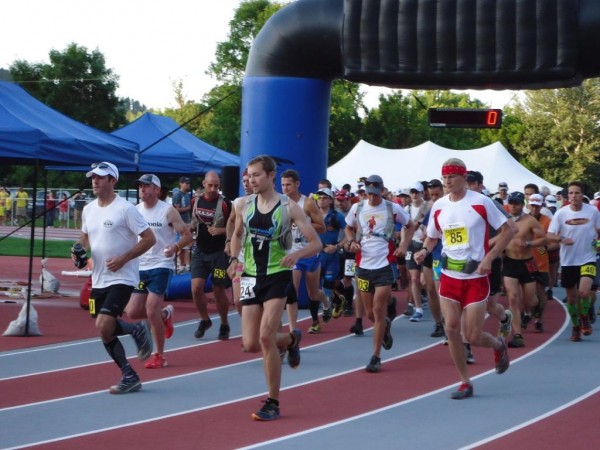 The 6 am start at Woodle Field in Sturgis

Such was the second running of the Black Hills 100 on June 23-24 starting and ending in Sturgis, South Dakota.  More than 200 racers began either the 50 mile, 100K, or 100 mile. In 2011, the first running of these races resulted in a 35 percent finishing rate for the 100 mile. That is a fairly low finishing rate for 100 mile courses throughout the country, and this low rate can be partly blamed on last year’s weather (heat and thunderstorms) but the brutality of the course is real and hasn’t changed since last year. 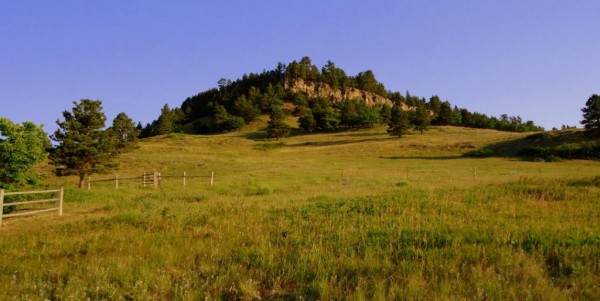 View of the area from Alkali Creek aid station – mile 5.7

The course follows the Centennial Trail for most of the course, which is entirely singletrack. Singletrack usually means rocks, roots, and constant elevation change and this course was no exception. For example, the 100-mile race has a cumulative vertical gain of 16,231 feet and cumulative descent of 16,231 feet. All three races are run out and back on the Centennial trial.

The Centennial trail is 111 miles long and honors the 100 years of South Dakota’s statehood from 1889 to 1989. The trail crosses the prairie grasslands from Bear Butte State Park on the north and climbs into the Black Hills high country, skirting lakes and streams until it reaches Wind Cave National Park near Hot Springs on the south (http://www.fs.usda.gov/blackhills). 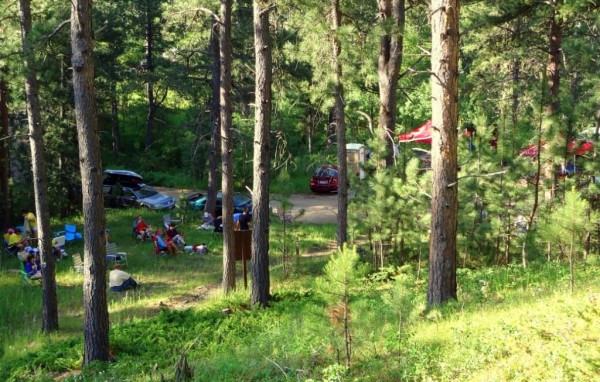 Several runners defied the odds and finished ahead of the majority of the crowd in these races. The race results can be found the Black Hills 100 website. Even those who weren’t in the top of the field, completing this race was accomplishment enough so all applause goes toward all who started and conquered.

Completing the 100-mile or 100K was the third challenge in 2012 Wilderness Athlete Gnarly Bandit Ultra Trail Series, offered by Upper Midwest Trail Runners. All athletes who complete all five races receive an equal portion of the $600 bounty put up by Wilderness Athlete Performance Products, as well as a coveted work of art by Rock Steady Racing’s own John Storkamp. 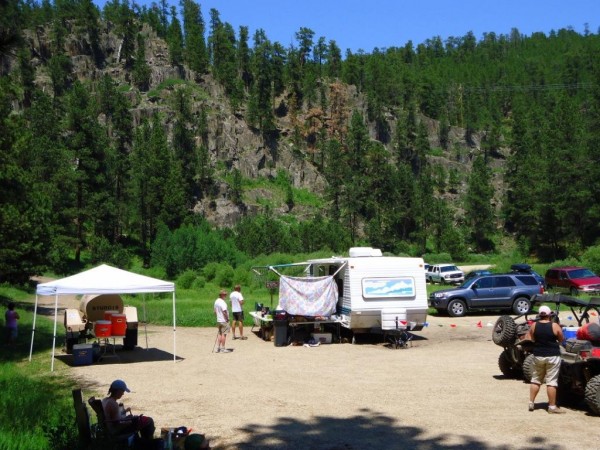 A view of the terrain from Pilot Knob aid station – mile 42.5

Eleven athletes completed the first challenge of the series, the Zumbro 100. With 10 athletes completing the second heat, the Kettle Moraine 100 mile or 100K, the Gnarly Bandit was not capturing nearly enough victims and was seriously losing ground.  It was his worst performance to date since the incorporation of the series three years ago.

Interestingly enough, the Gnarly Bandit still relies on many of the same old-fashioned tactics: defeating voices, body aches and stomach pains, and weather. Since the spooky voices, body nuisances, and pouring rain weren’t enough during the first two races in the series, the Bandit resorted to mind and body numbing heat. Ya know, the kind of heat where your head feels like it’s gonna explode and where every bit of shade, even if it’s the size of one-quarter of your body, feels so good. You know it’s hot when you start day dreaming for hours at a time about ice baths or diving into snow or even a glass of ice-cold water. 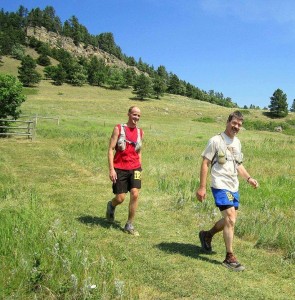 Aaron Buffington, one of the remaining conquerors in the series noted that “throwing up nine or ten times from the heat was just the beginning. I was stung by a bee, almost got hit by a kid on a motocross motorcycle, took a bad fall in the scree rocks and got lost at night for 45 minutes!”

The Gnarly Bandit has really resorted to some unusual tactics at this point in the series.

If you were counting, only six of the ten Gnarly runners who toed the line got to the finish line. However another way of reasoning is that six of ten runners began and conquered!

Only three weeks separated the second and third races in the Gnarly Bandit series, so finishing this race on so little rest was (in my opinion) one of the hardest feats to overcome. 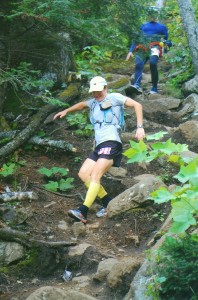 Superior 100: The author descending a rather technical section of trail during the 100 mile race in 2010.

The next test in the series is the Superior 100 on the north shore of Lake Superior in Minnesota on September 7-8 (that’s 11 weeks of recovery, which should suffice for recovery from a 100 mile race). However, the Superior 100 is one of the toughest 100 milers in the country. If you didn’t catch that, go back and re-read the last sentence. Yes….you saw it yourself ….in the country! Yes, in Minnesota. If you don’t believe me, why don’t you sign up, complete the course and see for yourself!

In my opinion, the Superior 100 may decide the outcome of the series. The only lenient feature in this race is the generous time limit of 38 hours, which rewards the humble (you won’t place at the top) and patient (some have been known to walk the entire course and finish in time, but no doddling).

Stay tuned for the reports on the Superior 100 and the Wild Duluth 100K, the last two trials in the 2012 Gnarly Bandit series.