The first Mad Trapper event of the 2009/2010 season has just wrapped (north of Ottawa near Wakefield, Quebec).  Had you been here five days before the race, Dec. 12, you wouldn’t have believed it to be possible. Earlier in the week there wasn’t a single snowflake on the ground and the inaugural race of the 2009/2010 season was in serious jeopardy. But, Tuesday evening the snow started falling and it didn’t stop until Thursday morning. Wednesday evening the decision was made, and with 30 new centimeters of snow on the ground, the race was a go.

When Saturday morning arrived, conditions couldn’t have been better. There was plenty of snow on the ground, the skies were clear and the temperature was hovering around -8C. The 2009 Canadian National Snowshoe Champion, Alexander Michel, was here…as was two-time Mad Trapper Series Champion James Galipeau. So, there was definitely going to be a competitive element to this event. But not only were these returning champions here, but so were a good handful of first time Mad Trapper racers. There was definitely some tangible pre-race excitement in the air, although I had the distinct impression that a few of the guys were more excited about the post race buffet than they were the race.

Recycled race bibs were handed out to the Solefit Orthotics 5k racers, and thanks to Raid the North, race jerseys were brought out for their 4th year of Atlas Snowshoe 10k use here at the Mad Trapper. This is certainly an over-the-top “No Waste” race. For perhaps the first time ever, everyone was lined up at the start line at precisely 10 a.m. Race and course instructions were given, the gun sounded and they were off. 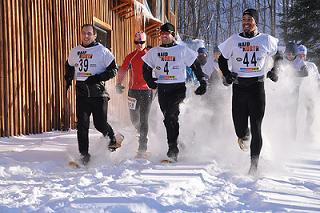 Nobody wanted to set the pace for this event. Although there isn’t much wind assistance from “drafting” in snowshoeing, the more people who race ahead of you, the firmer is the ground you have to run on. So for the Atlas 10k’ers especially, they wanted every advantage available to them. 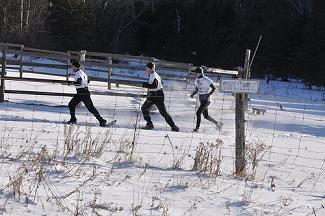 So, Stephan Meyer stepped up and powered ahead with Alexander Michel, James Galipeau, and Andrew Cameron hot on his heels, eating his snowy rooster tail. Steve maintained his lead for about 600m until the first big downhill and then the big guns decided to be a little more aggressive and pulled ahead. For the remainder of the race, 2009 Champ Alexander Michel held the lead with James Galipeau always within 20m of the leader – 30 to 60 seconds behind them was Andrew Cameron.

Andrew was wearing a high-definition video helmet camera and filmed over two hours of snowshoe racing. Once I get this edited down to a more reasonable viewing time, I’ll post it on the Synergyark, Mad Trapper Web site. 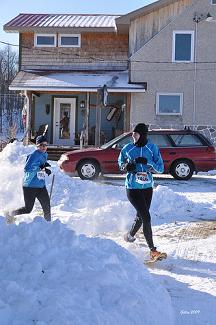 But of course Mad Trapper Races aren’t really about racing at all. They are more about the meal! This event’s buffet included meat and vegetable lasagna, a spring mix garden salad with a choice of dressings, The Ark’s already famous homemade brownies, tangerines, bananas, potato chips, hot chocolate and coffee. And while people were chowing-down on their second and third lunch helpings, prizes were awarded to the first place winners and randomly to people who could match me in the “1-2-3 Finger Game”. Of course, special consideration was given to those individuals who brought their own plates, cups and utensils with them. Prizes were also awarded directly the five individuals who all car-pooled up together in the Volkswagen sub-compact car.

Thanks to Bushtukah Great Outdoor Gear and Raid the North for donating our post race prizes. Our next event is Jan. 2, 2010. It’s the much feared, much dreaded, but oh-so-much-fun HILLY course. So come on out and see what you’re missing.

Full race information and results can be found at http://www.synergyark.com. 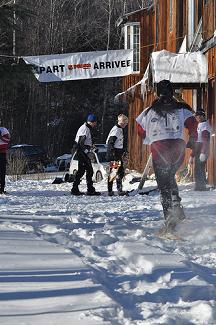