Mel Gibson wasn’t there, but race director Jim McDonell filled in admirably, donning full ‘Braveheart’ regalia including blue and white face paint and a Scottish kilt accented by . . .. snow pants? ‘You Betcha’ as Minnesotans would be want to say as another celebrity made a scheduled appearance – Mr. ‘Old Man’ Winter.

With a race starting-time temperature of -16 degrees and a ferocious NW wind that plunged windchills to -40 (!), this snowshoe qualifier for the 2007 Championships contrasted wildly with the 2006 Championship Event at Bolton Valley, Vermont, which also had 40 degrees at the start but on the balmy side of the gauge. 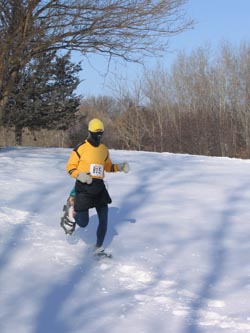 Generated heat, created by self-propelling those racing snowshoes, quickly warmed competitors. Many were unzipping and removing layers of headgear and gloves early in the 10K.

The first half of the course was mostly away from the wind, through woods and over other earthen barriers. In and around Mile Marker 4, though, racers faced the brunt of the weather and wind breaks like a barn became a welcome relief to block the permeating howl. Even ‘Barkey the Dog,’ who commands the territory around that barn, seemed to have choked back his typical ‘woof.’

USSSA Senior National Champion, Greg Hexum, didn’t stumble at all, winning 1st overall in 44:52, only 2 minutes slower than his record run at the Bolton Valley 2006 National Championship performance. Greg said, “This reminded me of my North Dakota College days where we regularly ran into 25 mph NW winds in the winter – maybe I got acclimatized.”

Cindy Brochman, National Championship Team Member and Chair of the 2007 Minneapolis National Championships to be held March 10th, 2007, won the Senior Women’s Category with a 59:11. Cindy stated, “It seemed as if you warmed up in the first half, preparing the quads to take a beating in the 2nd half.”

The Tartan Terrific course is a classic, ungroomed urban snowshoe layout with lots of challenges and intrigue. Greg commented, “This is a favorite. I liked the variety, lots of turns and big moguls, no time to get bored. With the funny winter this year, I’m happy just to be on snowshoes again.” Duluth, Minnesota, a perennial ice-box and Greg’s hometown, has a snow drought this season.

Several competitors, like Erin Ward, moaned about how they don’t do so well in cold weather, but she finished 4th woman overall, behind Cindy, Andrea Mueller, and Molly Cochran and dusted many of us in the process – perhaps left us in her ‘snow stream’ would be more seasonally appropriate.

The volunteers who showed big heart by braving the outdoors to service the event had the hardest job – they had to stay warm standing still, yet you could hear their encouragement piercing the wind well before reaching the aid stations.

And a feature that puts this event a notch above others is the ability to do the race day registration on 3 computers set up in the Sawmill Golf Course Clubhouse by Hangar51 Software. Print ‘em out, and be done with it. Results were easy then at the finish. 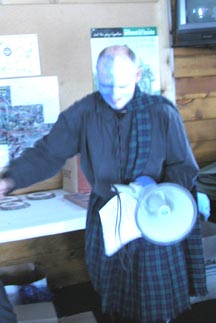 Everyone thawed during the slide show of the race immediately following the last competitor’s finish. Awards and prizes were handed out, but first, along with chili (“with or without meat?”) from The Machine Shed Restaurant, healthy servings were made of Old Orchard Apple Juice, “a tasty beverage to wash this down” as Jules would tell you in the movie, “Pulp Fiction.”

A famous tradition passed down from the Beargrease sled dog race, made famous in Northern Minnesota, continues at Tartan Terrific — the passing of the red lantern. Originally red lanterns were hung from roadhouses in Alaska signalling a team was still out on the trail, and Beargrease morphed it into a prize for the last place finisher. The snowshoer spending the most time on the course is awarded this prize, and it was Amy Hoover of Coon Rapids, Mn, in the ‘walker’ category, receiving a real red lantern for her endurance.

The USSSA signed up new members today who will be eligible to compete in the upcoming National Championship Event (www.2007snowshoenationals.com). Cindy Brochman guarantees snow for that big date, since Elm Creek Park Preserve has snow making equipment. Relative to today, temperatures should be down right tropical. Maybe warm enough for Jim McDonell to race in his kilt and face paint?

For the race results, visit the following link: https://www.snowshoemag.com/raceresults/raceresults020307.pdf. 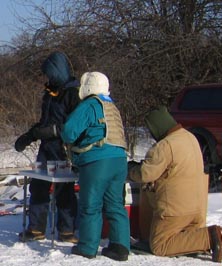