Overcoming obstacles defines a race director. Overcoming a titanic-sized load of them requires something else: the indomitable spirit of Patty Jo Struve. In classic understatement she said, “What a ride it was to make JazzTrax 2015 happen in a very low-snow year.” 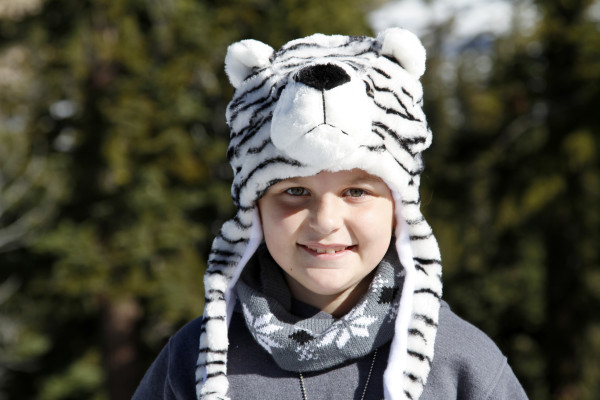 Continuing, Struve gave this account of the compounding of events lurking to derail the most unique Ninth Annual JazzTrax: “It all started back in October in preparing for this to be a successful national snowshoe qualifier.  Plans began in full force working with Bear Valley Cross Country, and owner Paul Peterson.  Next, I got the North Creek Academy (NCA) in Walnut Creek, California, to bring their junior high jazz band to the event. Their preparations rolled along, the kids excited about playing music and weekend travel. That was the easiest part of the story.” 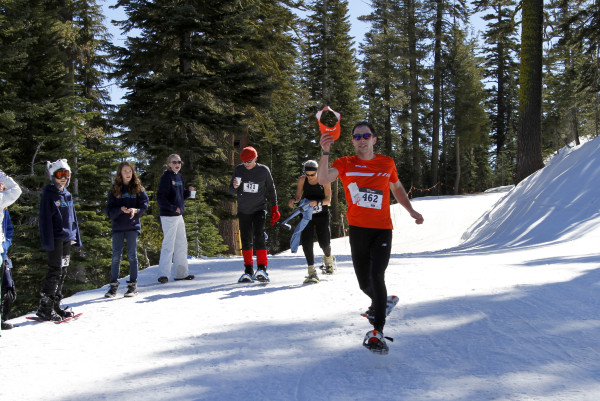 Overall 10 km winner, Nick Scalfone, tips his hat in gratitude for the hard work to get this event ready to race.

As time went on, roadblocks happened quickly like snowflakes falling. “I started to doubt the race happening. The biggest challenge was the dearth of snow at her usual race site due to the unusual warm winter weather.  “I had worked hard getting sponsors, food lined up, sound guy lined up, housing for the kids, and many other facets that go with directing a high quality event.  It was getting down to the wire” and she faced an unfortunate dilemma: “We only had two racers preregistered 14 days before the event.  At this point, I became very discouraged and told the kids we might have to cancel.  My, oh my, that was going down the road called huge disappointment.” 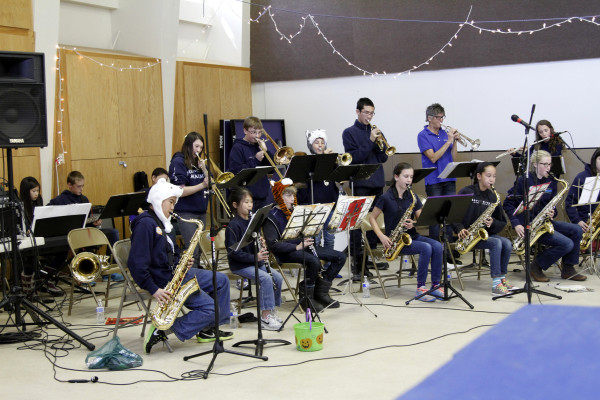 Here’s the NCA Ensemble hard into a song. Notice the pail on the front row, center; always a good idea to encourage those tip$

Struve didn’t ask for these challenges, but they occurred. She took the winner’s attitude. She embraced them. “So, I scrambled, asking nearby locations for an after-party venue if the race needed to race on dirt.  No luck with that. Additionally there was a load of correspondence between racers and me at this time.  Most said they would not come if the event was held on dirt.  At this point, there were a handful of racers that needed this race to qualify for the USSSA Nationals, and all the other California races cancelled.  Should I cancel?  After speaking with Candice Boswith, executive director of USSSA, she had me in tears when she said ‘You will be that one person they will always be grateful for.’  How could I let these guys down?” 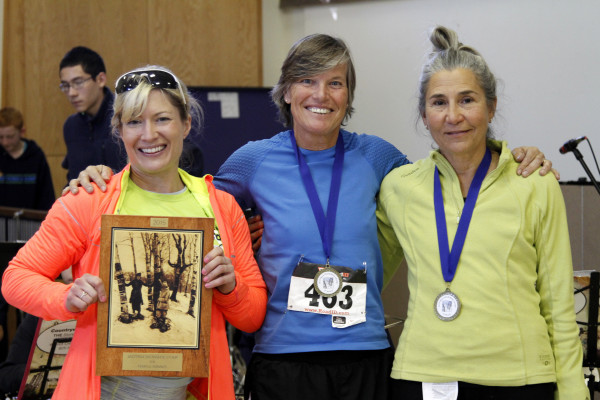 After the race Erika Kukuchi, the 10 km winner, with finishers Vicky Johnson and Wendy Newman

At this point she took a different tack. “So, I got in my car and drove 150 miles to Bear Valley to seek out a race course on snow. With the gracious help of Paul Peterson, owner of Bear Valley Cross, we plodded around with a GPS and tried to come up with something on the real Bear Valley Mountain; at 8,000 ft there was snow!   After four hours of seeking out the best course possible, while enduring frozen and wet feet, Paul said he would take care of it.  But then came the meeting with the ‘higher ups’ at the mountain.”

A truth comes into play here when one of the more unfortunate acts of life comes into play: asking permission.”When all was said and done, there remained a 50 percent chance we could hold it on the mountain.  Now the waiting began. I had already decided to take the kids up there and do a performance at Tamarack Lodge if nothing else. 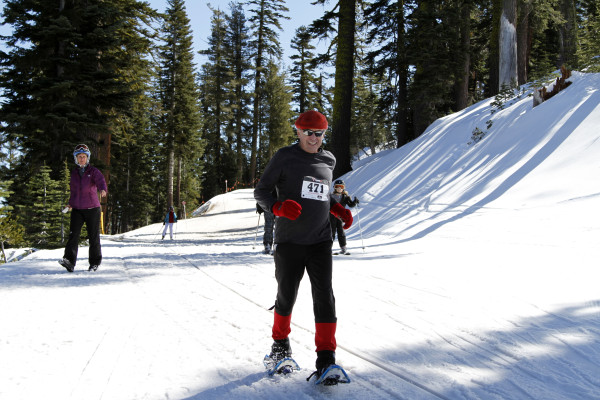 The Most Senior 10 km male, Jim Kauffold, works toward his finish.

On Thursday, just two days before the event, the race course received the approved!  I quickly informed racers and hoped to at least get 30 competitors registered so to break even on all the expenses.”

“Registration ran smoothly with the NCA parents and NCA Jazz students, getting the racers checked-in, handing out snowshoes, and goodie bags.  JazzTrax reached the goal: 30 entrants! It was so exciting to see all the new faces, and old familiar faces, coming out for the race.  We drove up the mountain, and after a short trek on foot, to the race start.” 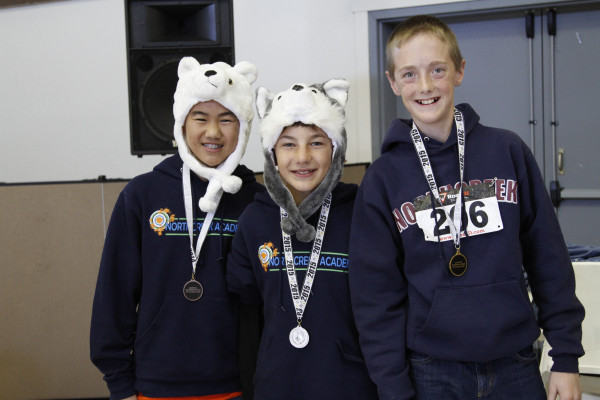 They race, then play the Jazz-it-up-music this race is renowned for: (L – R) Josh Tseng, Will Sauter and Tyler Dresdow

Peterson gave the course description to the anxious group. Then, like eight times before, the 2015 edition of JazzTrax began.

Struve explained, “The front-runners went out fast and furious uphill!  The kids in the one mile finished with big smiles on their faces while wearing their fun animal hats they received in their goodie bags.  Jazz students handed out drinks to the racers when they came through, cheering them on the whole time.

Most racers commented that the course was so beautiful and they really liked it a lot.  I am sure Paul worked hard to find the exact distance with the limitations from the mountain.  Without him, there would be no race course. 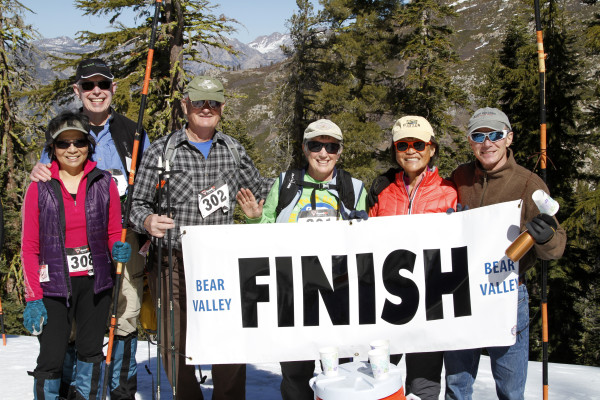 The Burton Group: all smiles with their finish.

In the 5 km, men’s winner Jim Burton did a fine job representing the locals. The women’s winner, Nancy Andelin, made it a family affair with her daughter and husband racing as well.

10 km winner Nick Scalfone initially had second thoughts about coming to the event. Afterwards, he was not disappointed about anything about this race.  If fact, he was very impressed with the race and after party.  Women’s 10 km winner, Erika Kikuchi, has raced the event in past years, now returning to gain a victory.

The awards party is one of its kind.  NCA Jazz performed 12 tunes for the entertainment. Paula Gonzales returned with her awesome food service.  Sam Nilsen, a local rock musician, was on hand for the sound equipment and ability to help the band sound amazing.  Everyone received an award or raffle prize.  No one goes home empty-handed at this party . . . .”Her efforts found help with the Atlas Snowshoe Company providing their best snowshoes for the raffle. Special note goes to the efforts of Bear Valley Cross Country, Bear Valley Mountain, Bear Valley SnoMobile, and Bear Valley Sports on behalf of the JazzTrax. Tamarack Lodge gained two more stars, now more than five of five, for their work to help the race in these circumstances. On Your Mark Events, Hazel Fisher School, Sports Basement, Colleen’s Corner, the Smokin’ Barrel, and lastly Ruby’s Lube All-Natural Anti-Chafe Balm. 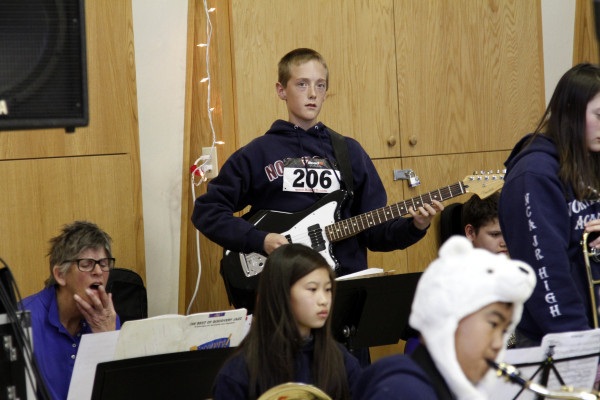 After the race, Tyler Dresdow helps rock the crowd with the day’s favorite song: “Wipe Out.”

Struve concluded, “All in all, this was once again an amazing experience for all who came.  We plan to continue the tradition and make it to the Tenth Annual Jazztrax Snowshoe Stomp in 2016. Hopefully we’ll see many more athletes who continue to support the growth of snowshoe racing as a sport.”

Thus concludes one of the more amazing stories of the 2014-2015 snowshoe racing season. The commitment of Patty Jo Struve in almost “willing” the event to occur provided a new, deeper definition for the sometimes trite declaration “above-and-beyond,” supplied not only athletes an opportunity to qualify for the USSSA National Championships along with racing an exciting layout, but also these young musicians an opportunity to strut their stuff. And how! The crowds’ favorite, “Wipe Out,” turned snowshoers into rockers. Recorded in 1963 by The Surfaris, the song references failure by a surfer. Today, the song celebrated success by those who give examples for the rest of us to pay attention to our creative young with the spirit of joy in competition. All at 8,000 feet high.