UPDATE: The following article is about a wonderful tour in natural location Unfortunately, it appears that now some visitors are skipping the tour and walking through private property to try and get to the cave. Absolutely do not do this. The tour site is located on someone’s private property and to reach the cave, visitors have to walk on the private property of another individual. The landowners only want guided tourists to walk on their land. Moreover, visitors parking vehicles cars anywhere on snowy and icy roads are causing problems. The number of visitors allowed into the site were determined by the local community. Tour guides, just like you and I, are trying to pay their bills while promoting and protecting the natural environment.The cave could be closed to the public if this situation continues. Do not go by yourself! 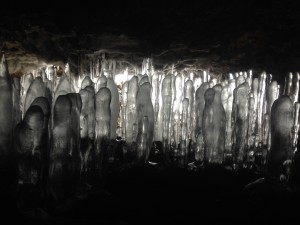 Approximately five thousand ice stalagmites and stalactites glow and shimmer,illuminated by the outside sun pouring into the eye-shaped opening of the ancient cave at the base of a snowy mountain. Subterranean translucent, curvaceous ice sculptures exist in only a small number of caves on Earth. Viewing this natural phenomenon was just one part of my wondrous snowshoe adventures in Otaki, Hokkaido, Japan.

Our snowshoe guide,Fumi Saikai,described the birth of the glowing ice sculptures while we stood in the back of the remote cave. The continuous rhythm of water dripping we heard echoing in the twenty-five meter deep cave was water percolating through the porous craggy cave roof and falling toward the cave floor. Droplets landing on 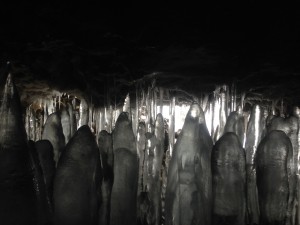 soil soak into the earth. Drops that fall onto rocks freeze. Another drop falls on top and before it freezes, that drop diffuses like a watery skin over the previously frozen water drop. Ice stalagmites grew slowly, incrementally, sometimes joining ice stalactites to form irregularly-shaped frozen crystal pillars. This process continuously repeats over the winter months when temperatures stay between the necessary creative temperatures of minus five and minus three degrees Celsius.

Shaped by the difference in temperatures between the front and back of the cave, the amount of 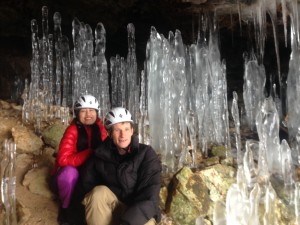 falling water, and the range in height between the cave roof and cave floor, each ice sculpture was unique. Some seemed like wavy swords, some looked like bowling pins, some seemed shaped in the form of dancing sperm, some looked like lamps created from glass, especially when the sunlight entered them and spread outward again.The mood was magical.

In my imagination, the cave could have been the setting in a magic or fantasy genre movie, such as Harry Potter or the Lord of the Rings. However, the contemporary name for the cave, 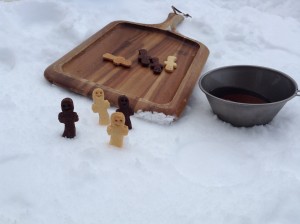 (NyoroNyoro Cave) is based on the Japanese name for Hattifatteners, characters in the Moomin books and comic strips by Swedish artist ToveJannson. Our guide explained that these works are extremely popular in Japan as he led us on a tour of the cave. After Mr. Sakai showed us pictures of the Hattifattener/NyoroNyoro characters and served us cookies produced in their shape, I had to agree with him that the ice formations do resemblethe Hattifatteners.

Our bilingual (Japanese & English) guide was a fount of information. On the path towards the cave, within the cave, and along the route back, he paused to point out interesting features of the environment and to teach us about the local ethnography, geology, natural history, and issues regarding tourism in the area.He was born and raised in Hokkaido, so he knows the area well. We clearly felt his deep love for nature and observed his delight and enthusiasm in teaching his charges.

For example, after half an hour of walking through pristine snow on the forested route to the cave, Sakai had us stop at a silver birch tree. He showed us horizontal scratches made by a bear in the bark, and he imitated how a bear would have grabbed the trunk to pull itself up from the deep snow for a better vantage point to look over the deep valley below.

Later within the cave, he taught us that the indigenous people of Hokkaido, the Ainu, used the cave as a base when hunting bear in the region. An old man in the area had told Sakai that in the man`s 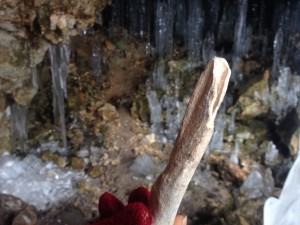 childhood, he had seen an Ainu shrine surrounded by bear skulls and other bones. Unfortunately, the shrine and skulls have disappeared in the ether of time. Mr. Sakai, intrigued by the old man`s memories had searched for hours below the cave for bones and finally found an ulna bone from a bear. Someone from the past had cut the bone apart to extract and eat the bear’s nutritious marrow. At the foot of the cave, Mr. Sakai showed us that bone. Seeing and touching that bone brought his stories to life. 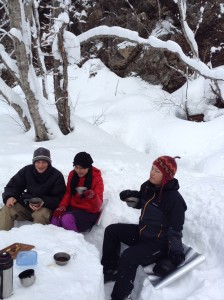 After showing us that bone, and before returning back to our starting point, our guide led us down from the cage to a flat area of snow, where his assistant had dug into the snow and shaped seats and table. We were treated to hot tea, cookies, and more information about current local issues and how he came to start leading tourists to the cave.

Before he started his tours, local officials were worried about tourists becoming lost, getting hurt in avalanches, or injuring themselves in falls within the caves. And many cave visitors were trespassers who were annoying property owners. The cave, located in the steep terrain of a semi-wild forest, is on the private property of a local farmer who allows Mr. Sakai to lead people there. Part of the path toward the cave is along a clear, meandering stream that is owned by Otaki City. The start of the route is owned by another farmer who grazes cattle there. People wanting to visit the cave were leaving their cars in the wrong places, preventing the access and egress of locals going about their daily lives. Snowfall in Hokkaido ranges between almost two and eleven meters, depending on the location, and Otaki gets it fair share. Many roads are unplowed. Often two-lane roads become one-lane roads during winter. Parking spaces disappear.

The Otaki Tourist Association (OTA) decided that the best solution was to have a licensed nature education guide lead tours, and they chose him. Sakai started Ootaki Outdoor Adventures. Local landowners, Sakai’s new tour company, and the OTA agreed on specific times and parking spaces for the tours. This agreement helps snowshoe tourists learn more about the nature and history of the region, brings some more revenue into the small town, and reduces numerous problems.

My wife and I were more than satisfied by the tour. The astonishing beauty of the ice sculptures 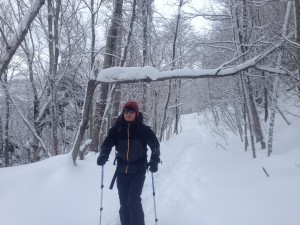 and the pillowy snowy forest vistas along the way deeply impressed us.We left felling enthralled by the experience and enriched by what we had learned.

The window of opportunity to enjoy this snowshoe tour depends on the environmental conditions. Usually tours run between mid-January to late March. The three-hour tour costs 5,000 yen (about 40 American dollars) for adults. For more information, contact Ootaki Outdoor Adventures. In summer and fall, you can enjoy kayaking in a nearby lake. For more information, contact http://www.ooa-guide.com/english/index.html.