“Take on whatever challenge winter decides to throw at us!” That’s the right attitude for a new addition to the snowshoe race calendar; great training for a National Championship USSSA Qualifiers where we will meet at winter’s Big Go, this year in neighboring Eau Claire, Wisconsin.

This new challenge includes distances of 10 km, 25 km, 50 km and 50 miles, great choices for a good time on snowshoes and foot. Mother nature decided to offer a variety of dirt trails for this inaugural snowshoe edition, so the race results skew somewhat. Not that Evan Groendyk of Grand Rapids, winner of the 10 km in 43:13, would necessarily be slower in snow, but there’s that chance. Still, a “43” is a fast trail run, period.

Kim Stoutenburg, Grand Rapids, won the women’s class in 50:54, also finishing overall in the top ten. Her race with Dan Klompmaker, Zeeland, who edged her at the line by four seconds and Scott Mulder, Grandville, following three seconds later, made for exciting finishes for the 7-8-9 slots.

Kent City’s Jill Evers-Bowers claimed second at 52:30, ahead of Ruth Pratt, Zeeland, by about a minute-and-a-half to complete the women’s top three. 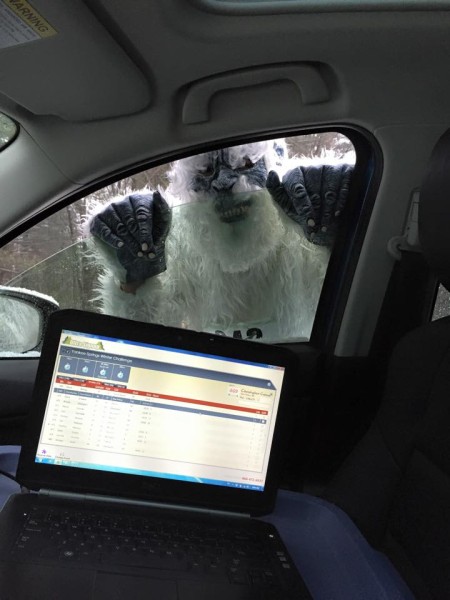 Michigan Yeti on the Loose! Let him take the computer; leave the canoli.

The field filled up with 116 toeing the line. Special notes include Hadley Moore, Hastings’ star at 71, who nailed a 1:05:56 for a mid-field finish while besting a number of 20-somethings. True determination helped Royal Oak’s Christine Utter and  Lynn Justusson, the race’s most mature female entrant at 67, complete the distance and claim their finish.

The 25 km found Kyle Mena, Grand Rapids, with a 1:44 to easily win gold. Emily Michaela, Grand Rapids, won the women’s class at 2:05:58, just missing the top ten by a few seconds to Michael Houttekier racing from Ada. 114 chose this distance including Thomas Wascha of Burton, who at 71 grabbed a terrific finish in 3:14:52. Marvin Lafler, 69, made Ionia proud with his 2:31:36 banner time. Credit goes to Lisa Heineman, Westland, and David Durham, New Haven, who showed grit in their determination to capture a finish, minutes under five hours.

I’m confident there were those disappointed they couldn’t snowshoe the 50 km distance, but absent the fluffy white stuff, dirt did just fine as Nicholas Budzyn, South Lyon, nailed the win a few ticks over four hours. Battle Creek’s Stephanie Schreiber grabbed the gold for women and nailed eighth overall with a 4:57:23. 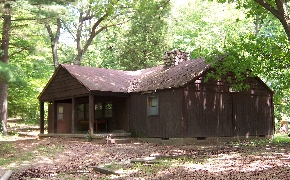 Enjoy a personal aid station on site, plus no driving!

Forty Six lined up for this ultra-distance including the Crabills of East Lansing; Alex and Brandon won a 9:24 finish and satisfaction of not giving up. Then, Kevin Van Harn from Colorado made the race and a 5:50 finish. Seventeen-year-old Chicago resident David Hedges, one of the youngest of any class, earned third overall with a 4:16, while Kent Frens of Grand Rapids won silver. Sweet sixteen, Lea Daporta, White Pigeon, stayed under an hour to take a 29:13 10 km finish, 25th overall; younger still, Grandville’s Emiliya Mironova at age 15 nabbed a 3:14:35 in the 25 km.

Lori Gromaski, Bay City, won her class gold in 7:53:10, edging Kalamazoo’s Brenda Eddington by 11 seconds. Kathy Siculan completed the women’s podium as she and Patrick Gorman, both of Barrington, finished a few seconds over nine hours, a great finishing time yet they were last in the field. Such a result reflects the quality of the entrants for this event.

Each 25 km loop reflects a 1545 ft elevation gain as the race describes: “The trails at Yankee Springs are quite hilly and have their share of rocks and roots to dance around. We do not know what Michigan weather will bring. There will probably be some snow, but it will probably be fairly well packed down. You don’t have to worry about a lot of mud because these trails are quite sandy and drain well. There are no water crossings on our courses.” 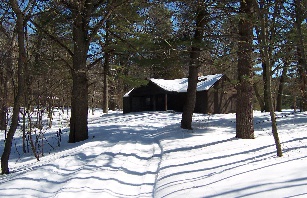 Metro Sports Medicine stepped up as an event sponsor along with Gazelle Sports and their many offerings and events. Icespike offers their great screw-shoes solution for a non-slip trip with a handsome discount to keep one’s duff off the rough from hidden ice and other slick options. Tec Labs offer their unique TecNu outdoor skin cleanser that attacks poison ivy and such before they make a rash. Here’s to being proactive!

The racers discovered Schnitz Deli chili with a meatless choice, too, available at the finish line feast. Winning the deli field, Schnitz offers their world-class sandwiches from Grand Rapids including Paul’s Best Bet, with grilled pepperham, and then the hefty Big John. Ahhh, Big John. From the song of the same name, comes this advice: “And everybody knew, ya didn’t give no lip to Big John,” because it’s so big . . . gotta open wide for this deli delight, sunshine.

Whether staying at the event cabins on site,  the nearby Holiday Inn Express, where one becomes smarter every overnight, or makes the drive to the start on race day, Switchback Endurance stages a popular event. Otherwise the entry list would not be this strong. Thinking ahead, 2016’s race with lots of snow on the ground looms as a great day for some big-mileage snowshoe distances. First, though, another trip by the Schnitz Deli meatless chili line; Hey! Who’s got the crackers?