Last Saturday I made a snowshoe trip up and back down the Thunderbolt Trail, a Depression-era ski piste located on Mount Greylock near my residence in Berkshire County, Massachusetts. Thiel Road was closed for the winter, so I embarked on the trip with my snowshoes initially strapped to my back rather than to my feet. It was a windy and cold day, so I was happy to arrive at the DCR signage signaling the turn into the woods and onto the Thunderbolt. I soon learned of what stuff sports-men and -women of the 1930s were made.

The features of the Thunderbolt

The Big Schuss is the first imposing named feature one encounters on the Thunderbolt when traveling from the bottom up. During my trip, I encountered the rather odd sight of a man descending with the aid of an ice ax but without MICROspikes or snowshoes. (Greylock is the kind of place which I would never recommend attacking without traction aid during meteorological winter, but one at which an ice ax is always going to be a bit of overkill.) The top of the Big Schuss provides a great view of the town of Adams nestled in the Hoosic Valley below, but the trip down is not one my beginner ski legs are quite ready for. 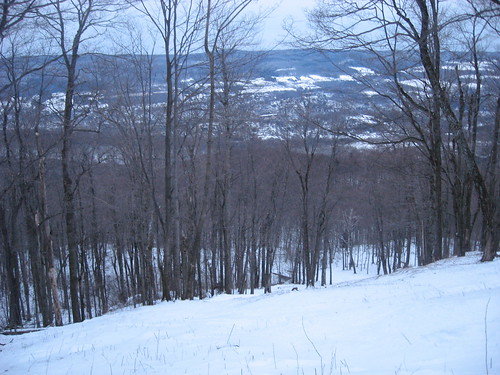 Next up for me was the narrow hairpin turn known as The Needle’s Eye. I shuddered to think of the task of squeezing through there in the days of straight, all-wooden skis. Further up and nearing the starting line, the feature known as The Big Bend turns right but slopes left. 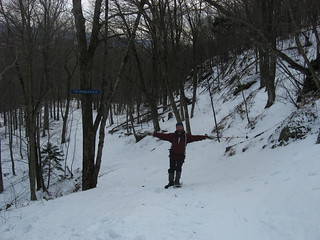 The author in The Needle’s Eye.

The scenery changes noticeably at the crest of The Big Bend as the trail enters a portion of the boreal forest found atop Greylock. Chilly summit winds are a four-season fact of life on the mountain, and Saturday was seeing gusts of 40 mph across Berkshire County. As I made quick tracks for the Thunderbolt warming hut to thaw out my fingers and have lunch the drifting on the northern side of the shelter told the tale. After my lunch, I made a quick excursion to the Veterans War Memorial Tower just to the south to find the ground largely swept clean. 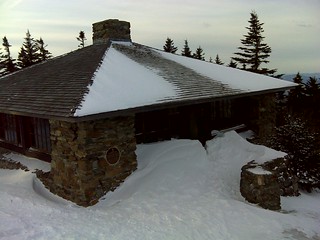 Drifting at the Thunderbolt warming hut. 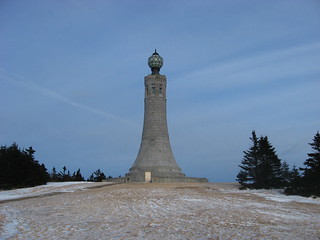 The windswept ground around the Veterans War Memorial Tower.

The genesis and life course of the Thunderbolt

The whos and hows of skiing in the 1930s differed drastically from those of today. Norwegian immigrants skiing with unbound heels—to this day, freeheel cross-country and Telemark skiing is referred to as “Nordic,” as is ski jumping—had introduced the activity to the New World in the second half of the 19th century as a utilitarian activity in rural areas and as a rough-and-tumble club activity among the proletariat. During the first quarter of the 20th century skiing found an entrée into the world of sport as well as increased prestige with the formation of college and university ski teams. The 1930s saw the introduction of mechanical lifts (though never at Mount Greylock) as well as an influx of Central European skiers downhilling in fixed heel (“Alpine”) bindings. And vitally to the Thunderbolt story, the 1930s saw the creation of the Civilian Conservation Corps.

The collaboration among various ski clubs and government agencies resulted in a 1933 project to create a first-rate ski piste on Mount Greylock. Charlie Parker, the caretaker of Bascom Lodge, laid out a course along the eastern side of the mountain running from the summit to Thiel Farm. The 107th Company of the CCC constructed the Thunderbolt Ski Run over the course of three months in the autumn of 1934, and in February of 1935, the first Massachusetts State Downhill Championship race was contested there. The trail remained a highly regarded race venue through the pre-War years, hosting events that attracted top-flight national talent as well as spectators by the thousands.

But in the post-War years, the lack of lift service combined with erratic snow conditions conspired to rob the Thunderbolt of its prominence during a period that saw the explosion of downhill skiing as a social activity. With the passage of time, lack of caretaking left the Thunderbolt all but unskiable even by experts. Revitalization efforts began with the clearing of brush in the ‘90s, and in 2010 the premier Thunderbolt Ski Race was held to coincide with the 75th anniversary of the trail’s completion.

While the race is modern backcountry snowsport rather than historical recreation, the backcountry experience preserves an unmistakable flavor of Thunderbolt races in days gone by. Particularly notable is the lack of grooming and lift service. Racers find the snow surface as the weather and previous skiers have left it, and they are required to make their way to the starting line under their own power while either toting their skis/board or skinning up by attaching mohair “skins” to their skis in order to provide traction for uphill travel. The latter requirement means one to two hours of exertion before a harrowing two to three-minute descent. As masochistic as that may sound to modern-day skiers, once upon a time it was the only way to go!

Reading up to read the landscape

Mount Greylock is about as close as you will come to the wilderness in the Commonwealth of Massachusetts. I think it fair to say that a first-time hiker or snowshoer there would be surprised to learn that top-flight athletes and spectators by the thousands flocked there every winter for over a decade. It is certainly something I would never have suspected had I not made a point of reading up on the landscape history prior to my weekend trip there. When I was in elementary school I used to be described as someone who would rather spend time reading than outside playing. I’m happy to have grown up to be someone who spends a lot of his reading time in the service of his time spent outside playing.

This article was updated on Sept 24, 2020, with a correction regarding the appropriate ascent trail for snowshoers on the Thunderbolt Trail.