Berkshire County had seen a clipper-rich but winter storm-poor snow season prior to Friday, with two late December storms contributing a snowpack which disappeared during a freakishly warm late January thaw + rain event. Given my winter job as a snowmaker at a local ski resort I have seen plenty of the white stuff myself, and my lift ticket has ensured that my time in the snow there has not been all business related. As much fun as learning to ski has been, however, I anticipated the approach of Winter Storm Nemo and the opportunity to trade the crowded frozen slopes for the solitary frozen forest. And Nemo did not disappoint! 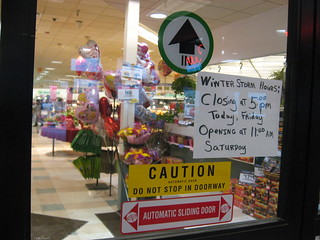 The snowfall in Pittsfield was already slacking off as I awoke a bit before dawn on Saturday morning. I gave the plows and salt a couple of hours to work before setting off for Beartown State Forest to my south. Many of the side roads had yet to be fully cleared, but with four-wheel drive aided by light traffic I arrived at my destination—a small, unmarked parking area off Alcott Road between the old mission town of Stockbridge and w. e. b. Du Bois’s birthplace of Great Barrington—with nary a dicey moment.

Temperatures were in the low teens upon my arrival and not forecast to rise much over the course of the day, with whipping winds which were forecast to intensify after nightfall. No path had been broken in the foot or so of snow upon my arrival. This was as I had expected, and I strapped on the pair of 16″ × 30″ bearpaws I had purchased in Wendake during a visit last spring. 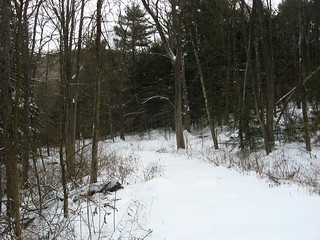 I get first tracks!

There is nothing in the way of wilderness in Massachusetts and the landcover of protected areas is almost invariably composed of second-growth forest, and typically quite young and scrubby second-growth forest, at that. Trails tend to be poorly blazed with signage all but absent. On the upside, traffic is low. The Berkshire Hills may lack the natural wonders and vistas of neighboring uplands but they also lack the hordes of visitors. The first real snowshoe trek I made was spent breaking trail on an evening and moonlit night a couple of winters ago in Beartown. As wonderful as all of my trips to the Catskills or Adirondacks have been, packed trails filled with über-competitive peakbaggers have never managed to do it for me the way that night did.

I started up the footprint of the old carriage path between Stockbridge and Great Barrington and quickly shed my outer layer as I got out of the wind and began a three-quarter mile climb. I clattered around a bit in my bearpaws; the Nemo snow was silica-like rather than wet as forecast, and when the pitch became steep my webbing slid a bit atop either the snow it had packed. I doubt crampons would have improved the situation much as they would have gained no purchase in the slippery snow, which fell directly on the leaf litter and boulders rather than already consolidated snowpack. 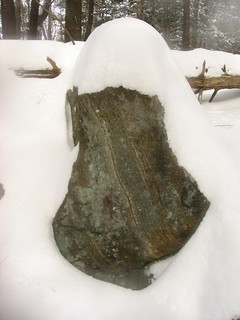 Catching the sights: a little powder, a little folding.

After a couple of hours the clouds started to part and I found a spot beneath an evergreen for lunch. I took my snowshoes off, undoffed my outer layer, and put the sit pad in my new Deuter pack to use for a sunny and solitary picnic. Try doing that in the High Peaks! 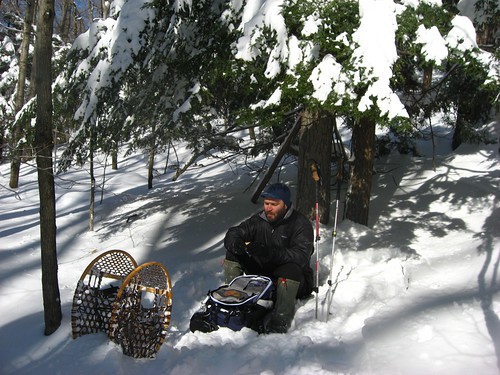 After packing back up, I kept breaking trail for another couple of hours with the goal of hooking up with the Wildcat Trail. I never quite made it, instead choosing to follow the tracks left by the unnamed Nordic skier who I sometimes think might be the only other human to frequent Beartown during the winter. One of these days I have to think we are going to be out at the same time! 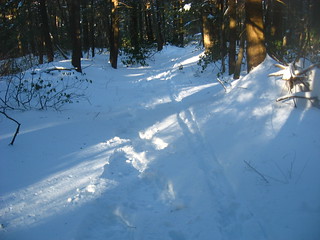 I ended up breaking about six miles worth of trail and making it out before the night and the winds caught up with me. As you can imagine, I ate and slept well before day two of my weekend!

Hancock Shaker Village is a working farm and three season museum located on Route 20 in Berkshire County within a stone’s throw of the New York State line. The portion of the museum is located on the south side of 20 and contains a number of architectural gems, including the signature round barn. 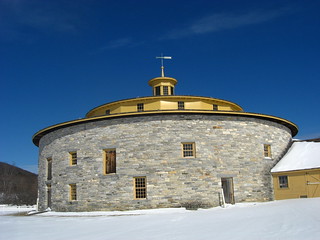 The Round Barn at Hancock Shaker village.

The cloud cover of the previous day had given way to a beautiful blue sky. With winds abated, temperatures approaching the freezing point, and a fresh snowpack reflecting the abundant sunshine, the late morning had the feel of a spring day. I traipsed over to the grounds to check the snow conditions prior to going to my snowshoe quiver. I found less accumulation than I had to Beartown to the south along with a few bare patches and drifts from the high winds of the night before. My bearpaws seemed overkill for the conditions and I decided to go with my MSR Lightning Flashes.

I crossed 20 in route to the Hancock Shaker Trail. Commencing in an open field, the trail makes quickly for the two century-old Shaker Reservoir. 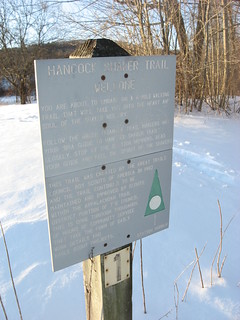 While the field below the reservoir had been smooth and untouched save a line of deer tracks, I soon came upon broken trail. I love the sight of fresh snow but given the miles of breaking trail I had put in Saturday I was not displeased to find the work already done for me! 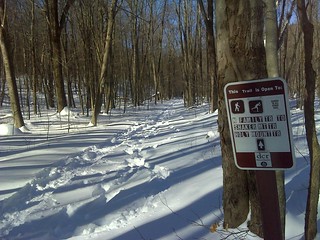 I soon found myself within sight of a series of dams on Shaker Brook. One of the delights of trekking the Northeast for this transplanted Southerner is happening upon abandoned mill seats. While the forests of my home region are also by-and-large second growth, the natural history tends to be quite different. Most are the results of regeneration of vegetation on lands put into protected states after the clearing of virgin forests by logging companies. The land use history in the Northeast is quite different, with currently protected lands often displaying the footprint of post-clearing human habitation. 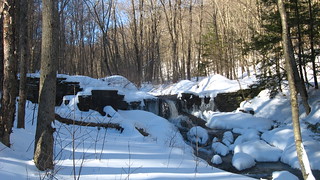 The lower dam on Shaker Brook.The trail crosses the brook below the dams and begins a pull uphill towards the Shaker Mountain ridgeline. As my hands began sweating in my Windstopper gloves during my pull up through the sun-softened sun I thought back to the day before and how I had at times struggled to keep my fingers warm in my boiled wool Ortovox mitts. I quickly began to cool down and dry off as I broke the ridgeline, where I found that the 50+ mph gusts of the night before had lift driftlines and windslabs in their wake. 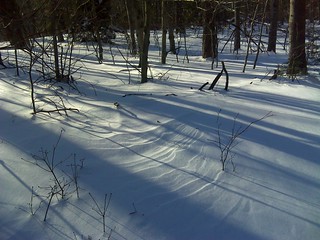 Driftlines along the Shaker Mountain ridgeline.

After descending Shaker Mountain the trail linked up with Griffin Trail for a short stretch, which I found broken out by snowmobilers. I used to think that snowmobilers were public enemy No. 1 during my winter treks, but my stance has softened considerably since working as a snowmaker and discovering the fun which riding on a sled can be. 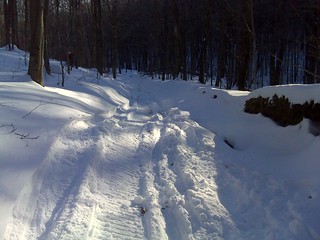 Nemo, a good reason to bring the sleds out onto the trails.

After rejoining the Hancock Shaker Trail I was soon back into the open field near 20 and I took a side route in order to spend the last third of a mile or so breaking trail on my way back to the trailhead. 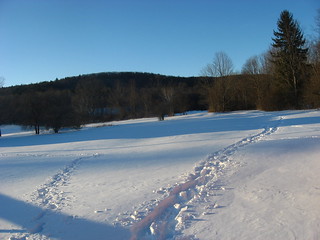 From whence I came.

I crossed the road to find some nice late light. A fitting ending to a fine weekend! 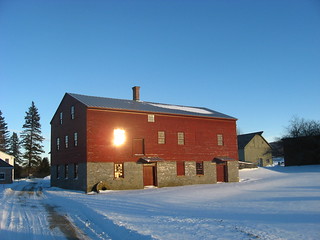