If you stand on Yennadon moor, high above Burrator Reservoir in the summer months, the views are simply breathtaking. The isolation simply inspiring. Here on the southwestern edge of Dartmoor, the grassland, the gorse and the fields stretch further than the eye can see. Skylarks soar, nearby waterfalls cascade and Dartmoor ponies graze. Visit the area in winter, after a heavy snowfall, and the scenery changes dramatically.

Still beautiful and picture perfect. Still peaceful, still serene. Yet haunting, but strangely inviting. Seasonal changes are inevitable, but the reservoir and surrounding area is still very popular with hikers whatever the weather, owing to its wealth of footpaths and spectacular views. Popular with families is the circular route around Burrator lake, which is flat, quite easy to walk and stretches for around three miles. In deep snow, it becomes a great snowshoeing experience, no matter what your skill level. It takes almost two hours to complete and parking is available at various locations nearby.

Burrator – Dartmoor’s first reservoir – has somehow managed to blend naturally into its surroundings, despite being man-made and more than 100 years old. As you stand near its shores, it’s hard to believe you are only 12 miles from Plymouth city centre. If you walk along the road leading from The Burrator Inn in Dousland for almost a mile, passing Iron Mine Lane, you’ll eventually reach the turn off to the reservoir on the left.

If you head off-road near the cattle grid, the gradual climb will bring you to the disused remnants of the old railway line, which, because most of it is flat, can be a great snowshoe walk in its own right. It’s worth pausing for breath as the climb levels off and slowly turning a full circle. The scenery will restore your soul. Look out for the small villages of Meavy and Sheepstor nestling in the valley below.  For the more adventurous, head up towards Sharpitor, on Walkhampton Common, around half a mile from the main Yelverton to Princetown road.

Stand near the top of this giant and you will be met with a view you’ll never forget. Look towards the southeast and you’ll see the craggy Leather Tor, one of Dartmoor’s most recognized. Leather Tor is an easy one to reach from the main road, but even for the keenest of hikers, it does present somewhat of a challenge, as once you reach its summit, the drop-off is over 100 feet. The views towards the southern end of the moor, though, are well worth the exercise. Because of the numerous footpaths that criss-cross the area as well as the open country, there’s no reason not to put your snowshoes on and head out on a crisp winter’s morning.

The snowfall can vary, but even if it’s been heavy, the going is none too strenuous and the experience can be exhilarating. Owing to the smaller amounts of traffic on the quiet country lanes – barring the odd tractor – these are ideal for snowshoeing and great exercise. Pavements are few however, so for safety, new visitors are advised to walk facing on-coming traffic, which will generally give you plenty of room. Be aware of the vague nature of the weather, as it has been known to change suddenly. Fortunately, there are adequate signposts everywhere, so the chances of getting lost are minimal. One thing is certain, you are guaranteed a sound night’s sleep after being out all day in the fresh ‘Devon air’. There’s possibly nothing more soothing.

Quaint inns and pubs are a major feature in the surrounding area. Next to the village green in Meavy is the Royal Oak Inn, dating from the 15th century. Named after the oak tree on the village green – around 800 years old – it’s a traditional village inn with huge open fireplace, old wooden beams on the ceiling and a flagstone floor. To add a real touch of ‘olde worlde’ charm, some of the pews from the nearby church have been used as seating. The inn has been included in the 2012 Good Pub Guide and food is served seven days a week, along with a children’s menu.

For dog owners, there’s no need to leave them outside, the establishment welcomes them, as long as they are kept under control. When the snow lies deep on its roof, it somehow resembles a Christmas card scene. The village of Sheepstor is a tiny community nearby which grew from a settlement originally dating from the 12th century. It’s beautiful old church, built from granite, dates from the 15th century and the village was featured in the Steven Spielberg film War Horse. The village’s name is derived from the distinctive outcrop of rock around half a mile north-east. It’s here, among these granite outcrops, that you’ll discover the naturally formed, but well hidden Piskie’s Cave, a find which is steeped in mystery and local folklore – one of the legendary homes of the ‘little folk of the moor’.

To get there, follow the tree-lined walk leading from the car park south-west of the tor. Well worth checking out is Yellow Mead Down, a few miles from Sheepstor. This is a concentric stone circle, one within the other, which dates from the Bronze Age. Head back towards the main Yelverton to Princetown road and you’ll find the Burrator Inn – the ‘Burrie’ – which dates back over 100 years. The welcome is always warm, the accommodation, the food and drink excellent and car parking is ample. For more details go to www.theburratorinn.com or call 01822-853121. 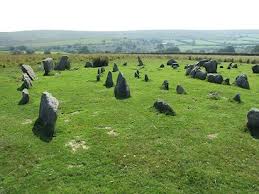 Drive a few miles to Whitchurch, and you’ll discover the 13th century Whitchurch Inn. Located on Church Hill, between Yelverton and Tavistock, its original oak door, oak beams and stone walls add to the ambience and you are literally guaranteed a warm welcome in the winter months, owing to two wood burners at both ends of the large bar. The inn offers an extensive menu, with freshly cooked food and drinks selection and its Sunday roast dinners are a speciality.

The inn is steeped in tradition and displays a mysterious framed shoe. An implement used in the dark and distant past to help ward off evil spirits. For more details call 01822-612181, or visit www.whitchurchinn.co.uk.  If you are keen on searching out the unusual, a short drive to Leg O’ Mutton, near Yelverton, will bring you to its Paperweight Museum. This began as a private collection, but gradually grew to over 1,200 items. For the sceptics, it’s safe to say the exhibits will amaze you.

The Burrator Reservoir catchment area contains a host of fascinating archaeological remains, many dating from 2500BC. It’s here that you will also find possibly the biggest number of hut circles on any moorland in Western Europe, with well over 150 historic sites including medieval farms and remains of tin works. This, combined with the diversity and unspoilt beauty of the region, draws huge numbers of visitors year on year. When the snow lies deep and crisp but not necessarily even, it’s easy to understand why the region is steeped in folklore and the unexplained. The peace and tranquility it provides, along with the warm southwestern hospitality, means that folk return again and again.