Racers were met with balmy spring temperatures and blue skies at the third and final race of the 2012 Beaver Creek Snowshoe Adventure Series and the Jeremy Wright North American Snowshoe Championships, held this past Sunday at Beaver Creek’s McCoy Park. The Jeremy Wright North American Snowshoe Championships are held in honor of Jeremy Wright, a former resident of Vail and regular on the local snowshoe racing scene, who passed away in Afghanistan in 2005.

The 5 and 10k routes started at an elevation of almost 9900 feet and kept on climbing, with the 5k route topping out at 10,278 feet and the 10k runners climbing an additional 131 feet to reach a maximum elevation of 10,409. Average course gradients were kept in the single digits, 9% for the 10k and 7% for the 5k, but mandatory ‘powder’ sections, where racers were required to make their own tracks through the snow, kept the course challenging. 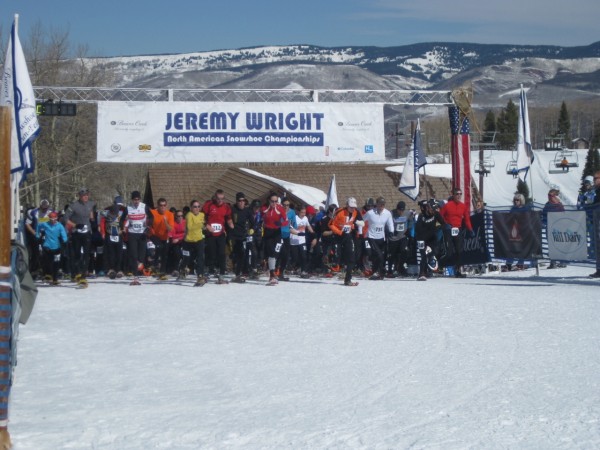 “The powder was pretty sugary, making it tough to stay balanced,” according to men’s East West Resorts 5k Quest winner Brian Welch, of Vail, CO, who added that, ‘racing in a short sleeve shirt was great!”

With a winning time of 47:41, Josiah Middaugh ran to his third win in the 2012 Cadillac 10K series, and also claimed the title of North American Snowshoe Champion. Inov-8/ Blackfox Brewing Co./Colorado Running Co. athlete Peter Maksimow, took second with a time of 48:08 and Travis Macy, a Merrell athlete, came in third at 51:14.

Welch’s winning time of 33:12 put him in a solid first place for the men’s East West Resorts 5K Quest. Mason Duncan took second place with a time of 34:03, followed by Ethan Pence for third, crossing the line in 35:21.