Flying into Denver and later traveling up into the mountains on the way to Frisco gave one a majestic, scenic view, but it also gave one a little less oxygen to work with on every breath as the altitude increased and the air got thinner.  One knew that it may be a struggle to maintain the fast pace they’re used to on race day, especially for those not used familiar with or adapted to the high elevation.  It was approximately 9,300 feet above sea level at the Dion United States National Snowshoe Championship race course at Summit High School — headquarters for all things championship like the reception, registration, race-start, and rewards — in Frisco, Colorado.  The course was scenic and beautiful, surrounded by evergreens and a picturesque mountainous landscape on an open field area in front of and on the side of the high school. 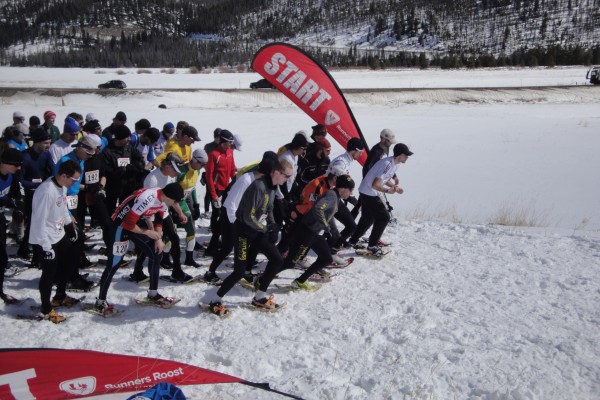 The best snowshoe racers in the nation, who had the chance to qualify in around a dozen different states with several chances in each, converged here to compete and show who were the best of the best on a primarily single-track course.  The course, which had one gradual long incline and a shorter-but-steeper climb was mainly flatland besides.  It was initially designed to be made more difficult, but unfortunately the USSSA was forced to change their course on short notice due to circumstances not allowing the competitors to traverse further up into the forest to the south.  Frisco’s course, hurriedly re-created the morning of the race, still had an oxygen-sapping gradual climb to the south that was curtailed back to the school but that also led to “Heartbreak Hill”, a steep grade that took several switchbacks to climb the side of before “avalanching” back down to a final curve that led to the finish.  But this course was a 5-kilometer loop, so it was run in two loops much to the delight of avid spectators of the Senior Women’s and Senior Men’s races. 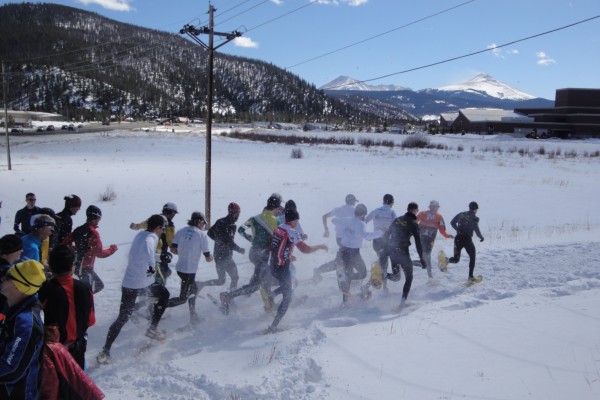 Last year Cable had more ups and downs with its roller-coaster landscape, plus an ultra-steep hill that had to be walked to save energy and the legs.  But this year had “easier” hills, but that didn’t make running them easier here, being nearly two miles above sea level.  The course had plenty of snow, and while the single-track itself was hard-packed in a lot of spots, it became more sugary in select areas that either the sun hit well or was in an open snowdrift area.  It felt warm (around 35 degrees) with a blazing bright sun (with less atmosphere to filter the sun rays), making the snow a blinding reflective material that may have burned some athlete’s faces (the dry mountain air and sporadic gusts of wind contributed as well).  Anyone that tried to pass off of the main single-track was met with a sinking feeling as they would posthole in the softer untouched snow.  Since it was difficult to pass, one hoped to be ahead of as many racers as possible early on and throughout the race without hindering anyone behind them. 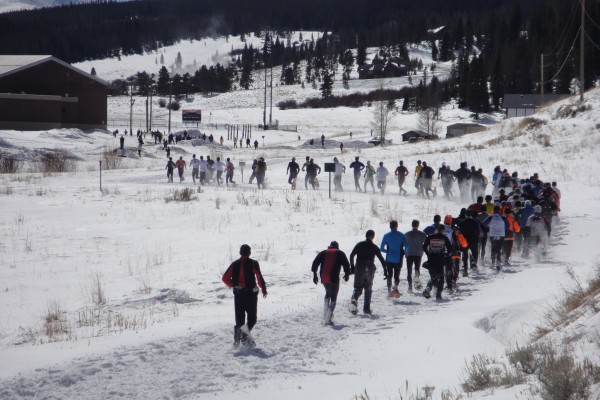 The Juniors 5-kilometer raced first (9 a.m.), and then the Women’s 10-kilometer championship ran an hour later (10 a.m.). By the time the Men’s 10-kilometer race was underway (11:30 a.m.), the course was more hard-packed with some other parts chewed up as melting temperatures contributed and the mountain winds also created new sudden snowdrifts in the flat open field area.  The course seemed to be a little easier on the second lap as most parts became more hard-packed and solid, with the new familiarity of the clockwise loop lending a hand as well.

If one got out too fast on this 10-kilometer championship course, they paid for it going into a super oxygen debt with struggles on the climbs encountered.  It seemed that most snowshoers went out conservative, to avoid the oxygen debt that may have been inevitable anyways for those not acclimated to it.  The start of the race was on a sugary straightaway (ran just once) that passed by the high school (and finish chute) and went towards the forest.  Most spectators were in this area, and they had a lot of excitement and a view of the race from far away if they were able to move locations.  Fans and loved ones couldn’t beat standing near the finish chute though, as they got see their favorite competitive athletes run by three times and give them support.

On the other side of the course but within view from the finish was Heartbreak Hill, where a good number of people chose to walk, although just for a few seconds on each of the steepest parts.  The path quickly zigzagged up the hill so the forward movement included a lot of back-and-forth of running and walking.  Coming down the hill was a challenge as balance had to be maintained on the sudden drop-off, where all of the elevation gained was abruptly lost all at once.  Coming around the final curve to the finish gave one a feeling of accomplishment and joy, hearing the vuvuzelas, cowbells and other crowd noise that led to a rousing finish with the great Mark Elmore calling out racers’ names and where they hailed from.  Most of the top athletes that crossed the line first came from the Rockies, definitely having a competitive advantage being able to train at high altitude year-round and being acclimated to the higher elevation. 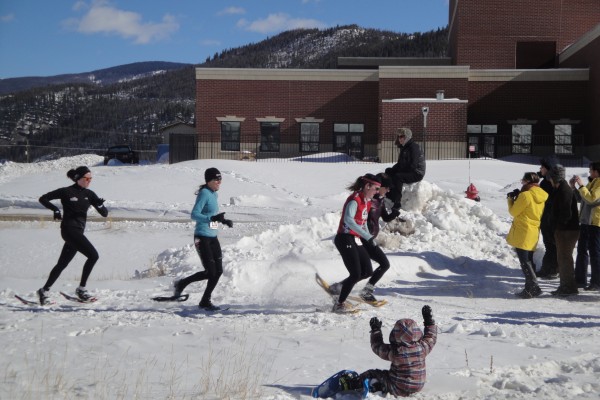 With this race being in Colorado, there were a significant amount of snowshoers hailing from the mountain state, 84 of the 181 that competed, or just more than 46 percent.  New York had the second most with 20 snowshoers (11 percent, Nationals were in New York near Syracuse two years earlier), and the Midwest showed up strong with 11 from Iowa, 10 from Wisconsin, 9 from Minnesota, 6 from Michigan and 2 from Illinois to total 38 athletes (21 percent).  Nearby New Mexico also had a strong population, having 9 competitors racing at the event (5 percent).  The remaining 30 racers (17 percent) traveled from one of 17 other states – exactly half of our 50 American states were represented plus one from wintry Norway.  There are several hotbeds of snowshoeing in our country that bring together some of the best winter athletes you could find. 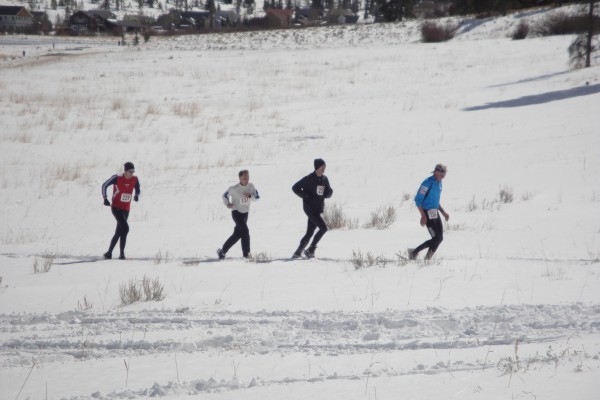 These tough competitors that congregated in Frisco came largely from the mountains but from the plains as well, and a few from much warmer climates – it was actually a warmer, mild strange winter all-around as snow was scarce at some of the USSSA qualifiers this season.  Next year the Championships will be back on the west coast, announced just hours after Frisco’s championship races to be in Bend, Oregon, on March 15-17, 2013.  Bend is located in central Oregon in the high desert country and rests among old snowcapped volcanoes, where the elevation is approximately 3600 feet, with tough climbs and some low oxygen expected, and optimistically, an abundance of snow.

One knows the Bend course will be difficult with its hills at a high altitude, but it would be tough to meet the challenging standards set for low oxygen at the Dion National Snowshoe Championships at Frisco Colorado’s Summit High School course on February 25th, 2012.

Additional information and results of these races are available at http://www.snowshoeracing.com/national_championship12.htm.