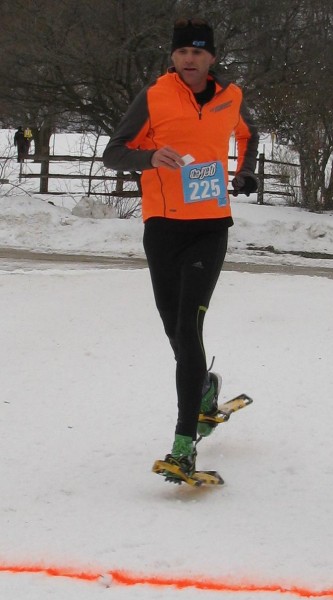 Trevor Thom of Toronto won the 5K Yeti Snowshoe Race at Scenic Caves on Saturday. It was the first Yeti race in Ontario, and was part of the Nordic Fest day at the caves.

Don’t panic if there were any Bigfoot sightings in the Blue Mountains Saturday. The Yeti was in town, leaving some big steps to follow in the snow.

While snowshoe racing is surprisingly popular around some parts of North America, it’s just beginning to catch on here in Ontario. So far, there’s no formal association governing the sport.

Saturday’s five-kilometre race was won by Trevor Thom of Toronto, a veteran trail runner who competes in a handful of such races every season. Race organizer Hugh Fallon talked about the underground popularity of the sport in Ontario.

“Right now there are real enthusiasts who keep the sport going and it’s very, very popular. I don’t think a lot of people realize that coming out to a race is as much fun as it is competitive. It’s as competitive as you want to make it and a lot of people shy away from coming out because they don’t really want to race.”

“This is a snowshoe series that’s been predominantly in British Columbia, but now is Ontario for the first time,” he said. “The snowshoe community is kind of close-knit, everybody knows everybody else; so we thought we’d try it here in the Blue Mountain area.”

“It’s a little more than a five-kilometre course,” added Fallon. “There’s about a 300-metre climb, and what comes up must come down. The 10K folks do two loops.”

This wasn’t really a recreational race, either, since the competitive juices were clearly in evidence.

“Some of these people are scary fast,” Fallon said. “There are some who compete in many events and not just snowshoeing. There are runners, extreme athletes, cyclists. There are just some real good athletes here today.” 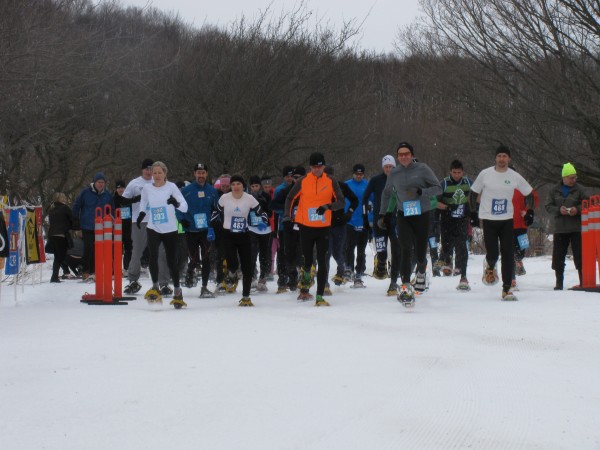 Fallon said he thinks the appeal of snowshoe racing is fairly simple.

“It gets you off your rear-end and gets you out in the middle of winter doing something,” he said. “It’s great cross-training for the running season, the biking season and you don’t burn a lot of energy just going downhill all day on skis, so it’s a nice way to get some exercise in the winter.” 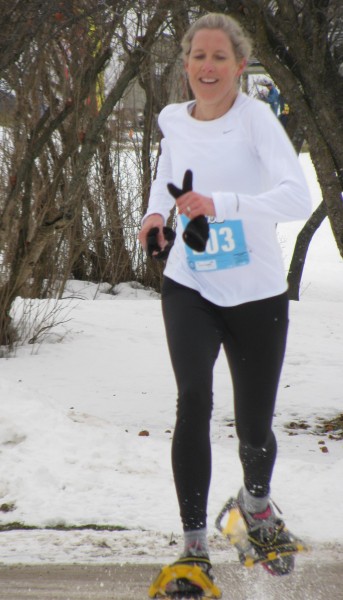 The sport is also challenging.

“It is more work. You’ve got the snowshoes strapped to your feet, and even the racing shoes do weigh something. Also you’re dealing with the uneven terrain. I would equate it more with trail running in the summer as opposed to road running.”

Thom said he’s a veteran race runner who participates in marathons and half-marathons frequently during the year.

“A friend convinced me about three years ago to start this sport in the winter and I became hooked on it pretty quickly. The appeal was to try something different in the winter. We ski a lot, and I find it a little hard to run here in Collingwood in the winter.”

“It’s a lot harder to run and race. It’s not that difficult to actually run in the snowshoes, it’s the terrain and the course. Most of the races around here are very well organized but they are very challenging here on the Niagara Escarpment. There are not a lot of flat areas, there are a lot of undulating hills, and in the cold air sometimes it can be pretty tough to do it. But it’s sort of exhilarating.”

For more information about The Yeti snowshoe series, visit http://www.theyeti.ca.