Late one evening last week while sipping hot cocoa, I found myself scouring the SOPA-controlled World Wide Web for all things shoe and all things snow.  Just another typical Saturday night, until it hit me.  Why aren’t snowshoes a part of the Olympic Games?  Needless to say, I wasn’t able to get to sleep.  Now that we’re smack dab in the middle of winter, it’s time to give some serious thought to answering this question, both politically and philosophically.

As a representation of Baldas Snowshoes (baldas.caribou.ca), I find it shameful that there isn’t a larger expression of snowshoes and snowshoe racing at the Winter Olympics.  Skis and snowboards are built almost entirely for recreation (excluding James Bond’s ever improbable theatrics to escape countless foes) whereas snowshoes only the other hand are not only fun, but highly practical. 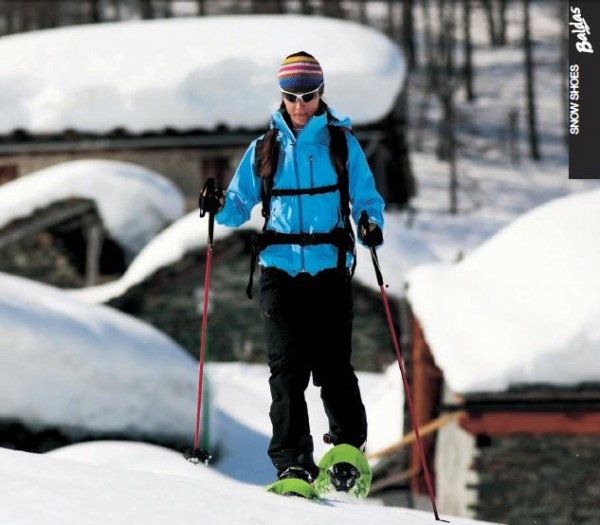 Our forefathers traversed the snow swept plains and Rocky Mountains on rawhide snowshoes, helping open the interior of North America to settlement and connecting the two coasts long before the construction of the railroads.  The snowshoe as we know it is deeply entrenched in the history of Native Americans; more so even than sports like hockey and lacrosse.  Indigenous peoples needed snowshoes to hunt in winter and survive.  Furthermore, there’s evidence in Northern Europe that a forerunner to the snowshoe evolved into what we now know as the Nordic ski.

So, why are snowshoes getting the cold shoulder?  A vast survey of three close friends yielded a near-unanimous result – snowshoes just aren’t exciting to watch.  I scoffed at this and immediately unfriended all three on Facebook.  Coming to my senses minutes later, I attempted to empathize with their condescending point of view.  Perhaps the regular ‘walking on snowshoes’ imagery I so idealize isn’t exactly filmic in the same way as heli-skiing, parachute snowboarding or half pipe tomfoolery.

Again, I’m a glass half full sort of guy.  Snowshoes are far more versatile than skis and snowboards combined.  There has to be a way to make them more intriguing to the common folk.  The answer is Snowshoe Winter Sports – new hybrids of popular spring and summer fare which are instantly transferrable to the chillier months once you add a little snowshoe.  And, of course, all snowshoe winter sport options would make for great alternatives to spice up the 2014 Winter Olympics in Sochi, Russia.  Here’s the first few that I came up with.

Winter Volleyball – The volleys are already being served over hardwood and sandy beaches with water polo not too far off the mark.  Why not serve them up over some fresh powder?  The biggest concern has always been that players would get stuck in the snow and the game would get sluggish.  With the flexible grip of Baldas Snowshoes, this is a nonissue.  You get all the traction you need and their sturdy design means they won’t break after you jump up for that killer spike.  And as appealing as bikini volleyball might be, frostbite is not, so dress sensibly.

Biathlon – This is another blatant example of the Olympics showing prejudice towards skis and rifles.  Why can’t it be snowshoes and crossbows?  Not only is snowshoe racing a more rigorous workout than cross-country skiing, but crossbows are heavier and harder to load than their modern counterparts.  More skill required equals more fun to watch, hands down.  Perhaps there’s room for two varieties of this event at the Winter Olympics.  Perhaps it’s time to bifurcate the biathlon.

Modern Winter Pentathlon – Although all five of the regular events (Long Jump, Javelin, 200 Meter Race, Discus and 1,500 Meter Race) are totally applicable with snowshoes on your feet, the winter iteration needs a bit more flair to stand apart from its summer equivalent.  The long jump and races are quite ubiquitous, but instead of javelin, how about a ski pole toss?  More appropriate to the winter theme, ski poles have different flight mechanics and wind conditions will also have to be factored in on the fly, much like in golf.  As well, the discus should be made out of ice, necessitating a firmer grip and more bodily control.

Outdoor Winter Boxing – When was the last time you commented on the illustrious and breathtaking atmosphere of a boxing arena?  What if the two opponents faced off amidst an empyrean field with picturesque views of snowcapped mountains and lazy evergreen forests in the background?  Your first thought might run to the latest version of Mortal Kombat coming to a gaming console near you.  Wrong.  It’s Outdoor Winter Boxing – a fighting sport that actually warrants getting that HD cable hookup.  I understand that this is all still hypothetical, but maybe this is the radical shift boxing needs to punch back in the ratings battle against the UFC.  Now I know what you’re thinking, and of course, all boxers would be required to wear snowshoes.  So would the referees.  Our snowshoes would give fighters the best traction possible in order to stay on their toes during all that quick footwork and keep beating each other up.

Snowshoe Soccer – Who would I be to not acknowledge this revered sport of Italy, the home country of Baldas Snowshoes?  Soccer in the snow actually creates some very interesting dynamics as the ball bounces more erratically and slides along icy patches at odd angles.  Simply ludicrous.  And as we all know, excessive unpredictably leads to elevated doses of excitement.  Moreover, due to our snowshoe’s superior ankle support, there’s less chance of players tripping and consequently, less melodramatic diving for which soccer is ever so infamous.

Snowshoe Football – Alas, a sport where diving gets the respect it deserves (see: none).  Players already wear cleats, so why not up the ante by strapping on a pair of Baldas Snowshoes?  Additionally, unless you are dealing with a college or pro budget, it’s going to be hard to clear a full foot of snow off the field for your cleats.  I definitely don’t want you to pull your back trying to accomplish this feat.  Instead, ensure that you and your buddies all have your own pair of snowshoes, then a pickup game will never fizzle out due to the lovely mirth that is winter.

These are just six examples that emerged from a recent brainstorming session, all of which I feel the Olympic Committee should strongly consider to help reignite our passion for the versatile and often underrated snowshoe.  I encourage you all to discuss these six options with your fellow snowshoeing compatriots and see which you prefer as well as any other hybridizations should bear fruit in the coming Winter Games.  With any luck, snowshoes will give the world of sports the breath of wintry fresh air it so direly needs.