“The history of the world…in phone numbers” is a line in , as a David Lynch movie-character describes another’s personal black book. From this preview of the book-to-come on global snowshoe racing conceived and constructed by the sports’ best fan in the Milky Way, USSSA Sports Director Mark Elmore, the reader traces the history of the world . . . in snowshoe racing. The History of Snowshoe Racing Around the World reads as quickly as a national championship snowshoe race, while Elmore’s creative mind comes alive page-after-page, his memories and worldwide collection of contacts yielding explosive photographs and details documenting this purest of all sports.

Early on I was privileged to read many chapters of this imaginative adventure along with Snowshoe Warrior, Brad Canham. The complexity of collating material from Elmore’s global snowshoe friends yields difficulties like reading French, Italian, plus a host of other communications that don’t fit in my language-educational background—essentially the languages of English and Southern. Come on, whom else but Elmore would have the intestinal fortitude to construct such a benchmark look-back, giving the sport a huge boost up the stepladder of importance.

Combating those funny looks and questioning eyes you experience when answering, “I’m entered in a snowshoe race,” you can add, “Well, you are aware snowshoeing is traced back more than 6000 years ago. And you can be sure, as humans are humans, someone tried to pass someone on a trail and a race was on. Go read it in The History of Snowshoe Racing Around the World.” 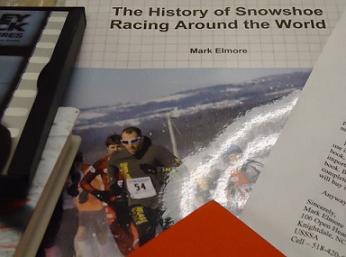 Discover early snowshoe confabs from photos captured out of the internationally recognized McCord Museum of Montreal, Canada, to New Hampshire’s Danny Ferreira racing a modern event with a smile and sleeveless shirt while high-stepping a mini-blizzard of white exhaust. Or, check Antonio Santi, ‘s star at the 2010 Men’s World Snowshoe Invitational racing in shorts, making trail like a banshee.

In an intriguing convention, the book introduces global Winter Warriors in special blocks scattered throughout like that of No. 11, Peter Buergens of the . In eight bullet-point highlights, one gets an encapsulated history of that person and a sense of their goals. For example, Buergens says, “We hope to host the first ever indoor snowshoe race using one of our popular Ski Halls.”

What one can admire about snowshoeing, a kind of thinking-persons’ foray in the white pale of winter, is exemplified by the “Vow of Chastity” adopted by the WMAC Dion Snowshoe Series. Described in the book as a philosophical anchor for this series, but having the makings for serving as a banner for the sport altogether, one learns that “Each participant is important – from the first to the last,” in case you ever wonder why snowshoe races seem to have the nicest people. Then the tenet that frees race directors to be creative, a freeing of the soul that only a crystallized day in snow can capture, states “Find a route that flows” and then, as the Beatles would sing about dissent, “Let it Be.” And while you’re at it, “The odder the distance . . . the better.” You bet! And let’s wear some tie-dyed snowsuits, too, and let snowshoeing change the world.

Here’s the point about the “Vows,” and that is this sport isn’t some X-Game dreamed up in a video factory, but rather is history remaking itself over-and-over while extending the record one local event at a time whether in Andorra, Catalonia, Finland, Japan, or in your snowy backyard forest.

It is this funkiness of a sport that Elmore captures as only he can with those global eyes of his. A huge advocate of all things snowshoeing and wooden snowshoes and fun and always with a smile and a walking memory bank of even the most mundane of detail, Elmore captures the essence of why, eventually, people will answer they run in the summer to cross-train for the snowshoe racing season.

With The History of Snowshoe Racing Around the World, the sport is ready for prime-time, now anxious to answer the call for a position at the Olympics podium as a competitive sport. The time is now for the recognition for athletes who move those oblong appliances on their feet at incredible speeds on pure white crystals while achieving personal satisfaction and little else except the self-earned confidence that, hey, I’m fit physically and mentally. You aren’t at the peak of snowshoeing unless you are racing this exhilarating sport that finds its place on calendars a few months of every year the way a sport is meant to be. 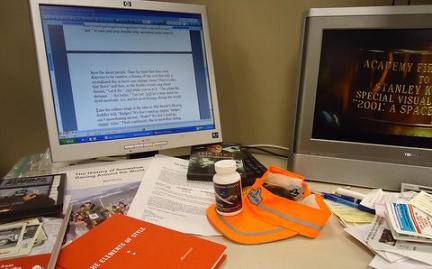 And the only other thing you need? Mark Elmore as your tour guide, exactly as he acts in The History of Snowshoe Racing Around the World. Coming soon; your holiday shopping is now done. Everybody you know gets a copy. Consider this the best Christmas gift you can buy. And, who knows; you may be in it.

(Note that the covers and some copy and editorial content may be changed for the final edition.)

Phillip Gary Smith’s books and blog are available at: amzn.to/dIdqQw