Paddling in the shadow of Southern Ontario’s Blue Mountains can leave a kayaker caught between a rock and a hard place.

I recently paddled and toured some of the Georgian Bay shoreline in the Blue Mountains north of the ski Mecca of Blue Mountain Resort area via two lesser-known conservation areas managed by the local Grey-Sauble Conservation Authority near the tiny towns of Meaford and Thornbury.

Neither area is particularly well-known, or well-traveled, which adds to the appeal. After paddling them, there’s no surprise why canoeists and kayakers keep their silence.

Christie Beach may be one of the more challenging areas to paddle that you can encounter. It’s an alluring mix of beauty and danger.

The area is relatively shallow and quite protected, thanks to a profusion of rocks – some of which may be the relics of docks and landings more than a century old. In other places, it’s clear the stones are erratics, dropped thousands of years ago by the comings and goings of glacial ice.

That makes the beach very attractive on windy days, when the interior sections remain quite calm.

The rocks also lend a striking ambiance to a paddle trip. By snaking between and around the pilings, it’s easy to lend the illusion of a longer paddle to even the shortest excursion. It’s reminiscent of paddling through the rocky coastline along the east or west coasts, or the rocky shores further north on the Great Lakes.

Of course, those rocks, coupled with the shallow water, are also hazardous.

Water levels fluctuate rapidly along the beach; any kayaker will likely hear the disconcerting sounds of a hull scraping over boulders submerged by mere centimeters of water. It’s close to impossible to avoid some of these rocks.

If that’s not enough to make a paddler nervous, every so often you may the kayak partway up on a large boulder – intentionally or not. The usual result is a nerve-racking list to one side, prompting furious back-paddling to try to pry the boat loose. With the water temperature holding around 50 F, this is not for the faint of heart.

Another highlight of Christie Beach, though, is the wildlife. A small flock of mute swans has laid claim to the area. Other noteworthy birds include a tiny colony of graceful common terns. Despite the name, these birds resembling miniature gulls are far from common anymore. Their rasping calls are usually the first indication of their presence.

With some patience, it’s sometimes possible to drift very close to both the terns and the swans in a kayak, affording intimate looks that cannot be matched on foot.

About five miles away is Peasemarsh Beach, also owned by the GSCA. This secluded beach is well worth a look, as it attracts even less attention than Christie Beach.

A short walk of perhaps a hundred metres leads to the water’s edge. Like Christie Beach, the water is initially quite shallow. Unlike its counterpart, this quickly changes.

Like many places on Georgian Bay, the impressive water clarity makes it simple to see the bottom even at that depth.

Paddle another few minutes, however, and the bottom drops out of sight. This water is better suited to sea kayaks with skirts, although open recreational boats can handle it without difficulty.

This route offers some of the most outstanding views of the Blue Mountains to be found anywhere. While they might only fit an Easterner’s definition of a mountain, they are still one of Southern Ontario’s more imposing geographical features.

Double-crested cormorants, common mergansers and mallards are common along the section of shoreline. More interesting was a bald eagle loafing along the shore, calling incessantly.

Peasemarsh also offers a nature trail through the bush, but it’s also one of the best growing spots for poison ivy to be found in the area. 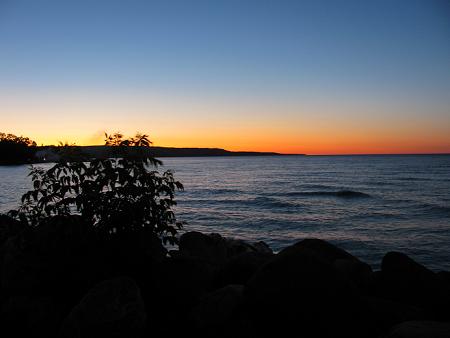