(Please note: After publishing this article, Glacier National Park has gone from 25 named glaciers to 23.)

“Of all the memorable views, the best have been framed by Montana windows.” ~William Hjortsberg

I was on a search for the true Montana – one of the last American wilderness areas that the masses have yet to alter or manipulate.  Although I wasn’t able to cover the majority of Glacier National Park’s more than one million acres on snowshoes, I was well satisfied with the meager 18 miles that I checked-off on my “list of things to do before dying.”  Among the turquoise lakes, creeks and rivers, I found myself feeling some frustration: It had taken me 33 years to gain an acquaintance with one of Mother Earth’s greatest treasures.  Established in 1910, the Park is a memorial to a planet once unharmed by human dominion and sprawl.  I was there to pay homage by snowshoeing among the wilds of a protected land and honor the Park’s Centennial commemoration.

Hosting my two-day, three-night excursion was the Glacier Outdoor Center, a charming outfitter and rafting company with 10 log cabins adorning its property.  Owners Darwon Stoneman, Sally Thompson and Onno Weiranga recently began offering guided snowshoe trips.  During the summer, the family-friendly Center is bustling with guests who are eager to whitewater raft and fly fish.  Nonetheless, this is a primary launching point for a number of year-round activities throughout Glacier National Park.

I would also have the pleasure of visiting several villages and towns that dot the landscape to the northeast of the Kalispell populous.  After a short United Airlines flight from Denver to Glacier International Airport (located near the outskirts of Kalispell), I found myself enjoying a pint of Moose Drool Brown Ale at a local bar/restaurant called Packer’s Roost in the village of Coram.  This colorful watering hole is frequented by a gaggle of genuine mountain men and women.  This would represent my first encounter with authentic Montana: organic, unrefined and completely appealing. 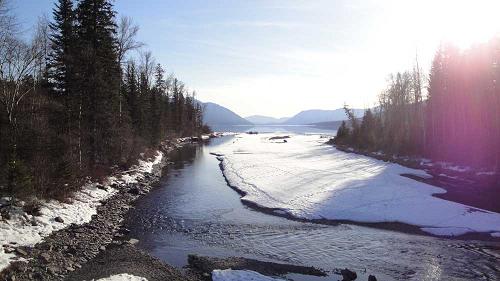 Known as the gateway to Glacier National Park, the town of Columbia Falls and its citizens seem immune to the big city rat race.  The township reveals a society of hardworking men and women that focus on family and community – the last bastion of real America.  In many ways, they are the caretakers of the Park and help lead visitors to its doorstep.

Before traveling to Montana, I had spent some time researching the Park’s history.  A common theme that continuously crept into my investigations was the problems related to climate change.  Slowly encroaching on the Park’s fragile ecosystem(s) is a crisis of environmental transformation: Melting glaciers are a result of rapid climate change.  Today, 25 named glaciers reside in the Park – each representing a flourishing past where gigantic ice fields loomed over the land.

When I arrived in early March, the area’s vital snow pack was at 67 percent (in some remote areas, it was less).  The El Niño weather phenomenon hasn’t been kind to the Rocky Mountains in 2010.  As a result, some of the Park trails were muddy, barren and icy.   For good snowshoeing snow, I would be hiking up to the higher elevations.

I soon began to appreciate the Park’s ability to survive and adjust over time.  From the outside looking in (and as a rookie to the climate change subject in general), I craved to know the “why” behind the obvious transformations the Park is experiencing.  A two-day snowshoeing tour only represented a small piece of a very large pie.

My first day experiencing the Montana wilderness was a short night’s sleep away.  I would have to be alert and mindful of my surroundings.  Anything could happen.

Hypnotized
“So when you go to bed tonight, and you hear a noise, whatever you do, don’t look out the window…because there might be a bear!” ~John Candy, The Great Outdoors 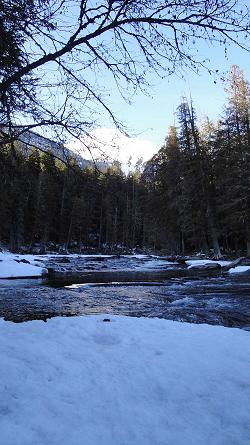 I woke to see a bright, somewhat full moon peering through the window blinds.  It was so brilliant and intense that it showered the surrounding snow near my cabin with an icy extraterrestrial glaze.  I could finally examine the Montana wilderness as it truly existed: The last of its kind in the lower 48 states.

To start the morning, I brewed a pot of Glacier Blend coffee.  Instantly, the aroma of coffee filled the cabin.  This would be my first indulgence for the morning.

For my second indulgence, I opened the front cabin window blinds to reveal a distant blanket of fog draping the forests that coated the Belton Hills.  The piney tops were frosted and the frigid air solidified the atmosphere of the Glacier Outdoor Center compound.  Everything was tranquil.  Silent.  At peace.

Still groggy from my slumber, I quickly slipped on my boots, threw-on my softshell jacket, stuck on my hat, grabbed my camera and stepped outside.  What ensued from that point on was somewhat alarming but also serendipitous.  Evidently, I didn’t adjust the door lock properly before leaping out into the cold.

In other words, I was locked out of my cabin.

The Glacier Outdoor Center isn’t entirely remote and removed from civilization, but it isn’t exactly the local hangout on a Friday at 7 a.m. either.  The current situation called for some exploring and landscape photography; it was time for a short hike around the property.

Ultimately, it’s what I needed: No cell phone, no gloves, a solid craving for freshly brewed coffee, and a vague idea of my general location.  Paranoia took over.

Wait…what was that sound?  Shhh…be quiet.  Nevermind…that was my stomach.  I’m hungry. 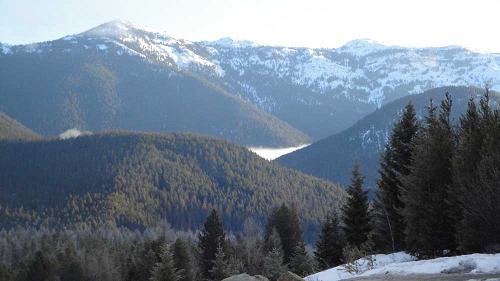 The Splendor of the Middle Fork, the Calm of Lake McDonald
“Many people do not realize that the snowshoe can be used for a great many things besides walking on snow. For instance, it can be used to carry pancakes from the stove to the breakfast table.” ~Jack Handey

Saved!  Hilary Hutcheson from Outside Media arrived to pick me up for breakfast around 8 a.m., which means I was aimlessly exploring the Glacier Outdoor Center for about an hour.  Embarrassing?  Yes.  A funny yarn to spin at a party?  Also, yes.

I was off to eat breakfast at the Trapline Café: Half restaurant, half gas station and 100 percent warming to the soul.  Joining me for breakfast was Hilary, Darwon Stoneman and Outside Media’s Amy May, my snowshoeing buddy for the morning.

The Trapline had that “home cooking” appeal – combining a dining room full of friendly local guests and a rustic ambiance.  For a Denver Omelet that’s made-to-order and not short of the right ingredients, the Trapline is the place to dine.  I scarfed down the omelet and didn’t leave room for the hashbrowns and toast.  Now I had some calories to work off during my snowshoe outing on the South Boundary Trail – my first taste of what Glacier National Park has to offer. 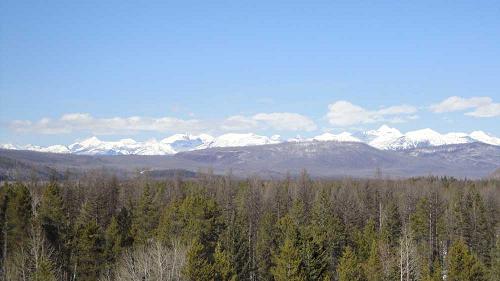