The weather would continue to capture headlines as we set up for the World Snowshoe Invitational. Conditions were going to be tough for all the competitors and the organizing crew as rain was falling on the already heavy wet snow. It might be best described as running on sand and the 8.2km course was going to feel like 16.4. Add in the massive climb and undulating terrain this was going to be a tough one. But everyone was excited as we realizing that we were going to produce the fastest, strongest snowshoer in the World.

The short 300 metre start loop would produce the top runners on the day as they made their way out on course. Racers began to realize what kind of day it would be with a soft wet heavy surface, big climbs and technical up and down would start to prove itself as a challenging world class course.

The field was soon sorted out and it was a “one, two, three” punch between Italy, Switzerland and New Zealand. After just under 50 minutes of racing the two top men appeared and it was going to be decided by a sprint finish, or not. One hundred feet out, Antonio Santi from Italy and Tarcis Ancay from Switzerland stomped on the acceleraler and went for it. Both runners could taste victory, but it was not to be for Antonio as he caught an edge and went down 50 feet out from the line opening up the gate for Traces. Less than 30 seconds later Jonathan Wyatt from New Zealand charged across the line.

In the women’s field the Italians were also establishing themselves with the 2010 Le Ciaspolada winner Maria Grazia Roberti going hard of the line taking the lead and hanging onto it. North American Snowshoe Champion Keri Nelson was determined to establish herself as world number one, but on the day she would have to settle for No. 2. Arguably, the fastest woman on snowshoes is Canadian Syl Corbett.  She had great day finishing by finishing in third place. 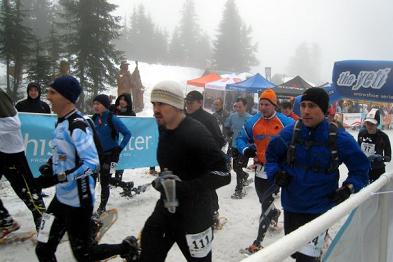 Saturday, Feb. 27 was not only about world champions, it was also about the Canadian National Champions. The 2008 and 2009 Canadian National Champions were ready to go head-to-head with Jason Loutitt representing the west and Jimmy Gobeil representing the east.  On Jan. 31 at Mount Washington, Jason went out hard and was hanging onto a strong lead until Shaun Stevens Whale blew by him taking first place by seconds. Jason did not want that to happen again and as the race unfolded Loutitt would define himself as the runner to beat in Canada on snow coming in seventh overall and the first Canadian to cross the line. Shaun would not be far behind coming in eighth overall and the second Canadian with 2009 National Champion Jimmy Gobeil rounding out the top 10 (and a third for Canada).

A close race was unfolding between the top two women with Sly Corbett and Cheryl Beatty both smelling potential victory. That little extra from Syl close to the line proved to be the difference – less than 15 seconds would separate the two top Canadian females. Cheryl had a solid run and was pleased with her result, as was Carolyn Goluza who rounded out the top three.

So many great performances on the day as many local Canadian runners were thrilled to be on the line with such great International talent. Running in an event with World Champions, National Champions, Olympians and World Record holders has to be something to remember. And that is what the World Snowshoe Invitational was: Something to remember, making history in North America with an up and coming sport such as snowshoe running.

This event might just mark a turning point in the sport capturing the attention of many people around the world. Also, the sport knocked on the door of the Winter Olympics here in Vancouver. It has always been a long term goal to keep pushing our sport towards being accepted into the Winter Olympics – a stage that has very high long steps that are hard to reach. We can only hope that an impression was made and that next time around we might be that much closer to being part of the medal count. 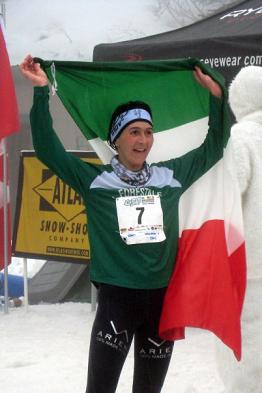