Another terrific season of Mad Trapper Snowshoe racing is now in the books. And thanks to global climate change, each passing year gets more interesting and more challenging. This past winter the only real snow we saw book-ended the season. We had a great dump of snow in mid December, with spots of rain and light flurries through January and February. It wasn’t until late February, the week prior to the Mad Trapper Grand Finale, that any measurable amount of snow fell again.

The first three races all started with temperatures hovering around -20C, but with the temperature above freezing this past Saturday, one brave (crazy) racer chose to race in shorts and gaiters. Overall though, the weather did cooperate and there was enough snow for each and every race. 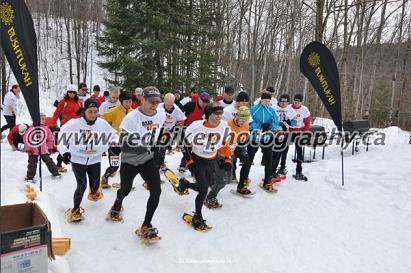 Snow conditions for the Mad Trapper Grand Finale were going to make racing tough for all the competitors. The snow was deep, wet, and heavy. Hiking the course, setting the flags on the previous Friday evening nearly killed me with exertion. Leaving deep footprints in the snow made it easy for the racers to follow the trail, but the men complained that my walking stride was too short and the women complained that my stride was too long. My response to all of them was that they should run beside my tracks and make their own trail if they’re not happy with my stride length.

In the Atlas Snowshoe 10k division, the overall men’s winner had already been locked up by Alexander Michel (last year’s champ, with two first-place and one second-place finish).  Alex couldn’t make it to the Finale though due to a prior ski engagement. Perennial second and third place finishers, James Galipeau and Andrew Cameron had just this week returned from a six-day adventure race down in Patagonia, Chile where they finished in 6th place overall with a final time of 142 hours (of nonstop racing!). So they weren’t quite yet recovered enough to compete this weekend either. This left the overall men’s category up for grabs. Pre-race speculation was that it would come down to John Ranson, Steve Meyer, or the shorts-clad Gilles Parisien for the win.

Steve Meyer wanted it most though, and after hanging with the lead pack for the entire “flatter” course and half of the “hilly” course, he made his move on the big mountain climb and never looked back. Steve finished a 1:15 ahead of John Ranson, and 1:24 ahead of Gilles Parisien. 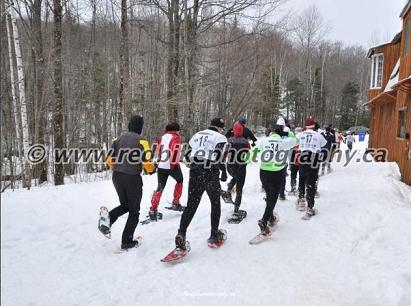 On the women’s side of the Atlas 10k Series, all eyes were on Tanya Hanham. Although an all-round athlete, Tanya considers herself more of a mountain biker and hadn’t snowshoe raced prior to this season. She finished in second place in her first race of the season, but that was wearing her big backcountry snowshoes. Once I convinced her of the value of the Atlas Race Snowshoes, she was untouchable and went on to finish in first place in her remaining three races for a resounding overall series win. And thanks to our sponsor, the Atlas Snowshoe Co., Tanya now has a pair of her very own Atlas Race snowshoes.  Let’s see if she can defend her title next season.

On the women’s side of the Solefit Orthotics 5K Series, Sylvie D’Aoust had her Series Championship locked up as well with one first place and two second-place finishes. Given that the Mad Trapper prioritizes fun and family over cutthroat competition, Sylvie was able to convince her seven year-old daughter Tamsyn to compete on the 5K course with her. So congratulations go to Sylvie for winning the overall Solefit Orthotics 5K Series Champion title, and to her daughter Tamsyn for not only being the youngest competitor to finish a 5K course here, but she did so on the dreaded Hilly Course, on the toughest snow conditions ever. So congratulations again to mother and daughter. 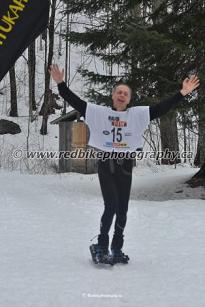 Following the race, participants enjoyed another terrific post race party. Once again Monique’s home made chili, home made brownies, and home made cookies attracted more attention and praise than the actual race itself. Our number one prizing sponsor, Bushtukah, also stepped up bringing even more post race prizing to this final event. Many thanks to Bushtukah Great Outdoor Gear for their ongoing support and sponsorship of the Mad Trapper.

In the end, everyone went home with big smiles on their faces. Everyone left with tired legs and full bellies, and the majority of people went home with a race prize as well. All are already looking forward to next season, where we’ll once again be hosting four Mad Trapper events. Next year’s line-up will see one slight change however. We’ll still be hosting one “flatter” course, one “hilly” course, and the final combined course. But the third race of the season in late January will be a night race, followed by an all-night snowshoe dance party RAVE! Bushtukah has already agreed to provide headlamp discounts to registered racers. Now we just need to sign on an energy drink supplier to ensure we’re not all asleep by 9 p.m.

So thanks to everyone who competed in this year’s events and thanks to the Atlas Snowshoe Co., Solefit Orthotics, Bushtukah Great Outdoor Gear, and Frontier Adventure Racing for their ongoing sponsorship and support.  See you all again next winter! 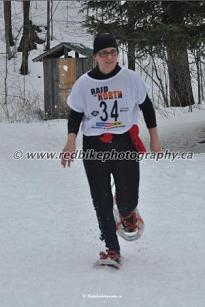