I do not come from a family of snowshoeing lovers. In fact, I think it’s safe to say that everyone in my family highly dislikes snowshoeing. We’re skiing people, sledding people, heck, we even go ice skating and ice fishing once in a while. But snowshoeing is not on our list of things to do.

I remember finding my grandfather’s old set of snowshoes from the 1940s in our barn when I was little. I asked if I could try them, and while no one said no, they didn’t really act like it would be any fun. So I forgot about them. Years later, in college, my brother purchased a set of snowshoes and hated them. “A waste of time and money. You just sink,” he said. Several of my college friends disagreed with him and loved snowshoeing, but I never went out with them as I usually opted to go skiing instead.

So when a friend invited me to go snowshoeing in the Black Hills, I hesitated a little. But, I’m pretty open-minded and always up for something new so I agreed. Sunday morning we went up Spearfish Canyon on Highway 14A to Iron Creek. The turnout is a small parking lot next to the Iron Creek Bridge – noted on a green highway sign on the right, a few miles before Savoy. 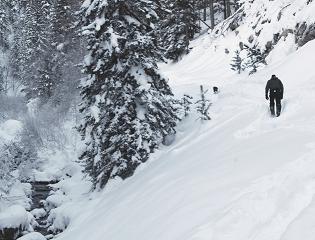 I didn’t even know how to work all the straps to put on my bright red snowshoes on over my snow boots. With a little help from my friend, we were finally off down the trail.  Or I should say he was off down the trail, moving along quickly, looking as graceful as I think a person can look on snowshoes.

I, meanwhile, felt like an awkward fool and wasn’t able to keep pace with him.  I quickly got hot, irritated and frustrated. Stupid snowshoes! It felt like I was trudging along with cinder blocks strapped on my feet. The smooth, clean tracks of cross country skiers were next the frumpy tracks of the snowshoes, and I kept looking at the ski tracks with envy.

Iron Creek is a small stream that winds down a pretty little canyon with several small waterfalls. Willows, birch and tall pines are scattered along the streambed, buttressing massive golden rock walls. But I wasn’t noticing the scenery much, because in trying to catch up with my friend, I somehow managed to trip myself and face plant into the snow…twice.

Getting up from my second graceful fall, I stopped and looked around. It was gorgeous. Even if I did have cinder blocks on my feet, I was still in the beautiful outdoors. As I got used to my snowshoes, I was even able to upgrade from a trudge to a run! I didn’t fall or trip myself the rest of the day and ended up having a great time. I realized that snowshoes are actually pretty cool, because you can easily go off-trail and uphill, much easier than if you were on skis.

So, in the end, I came to terms with snowshoes. I’m not going to say it’s my favorite winter activity, but if my friend invites me to go out again, I’m game. And maybe I can convince my brother to give his snowshoes another try…or give them to me. 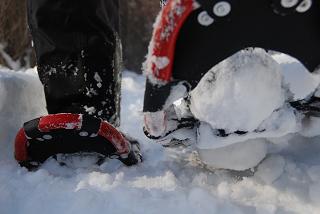