The conditions weren’t perfect for snowshoeing due to the 30-plus degree temperatures on race day for the Timm’s Hill Trudge but it was a fun atmosphere nonetheless at High Point Village in Ogema, Wisconsin on Saturday, March 7th.  This race was during the same weekend as the United States National Snowshoe Championships at Mount Hood, Oregon, so unfortunately one couldn’t have snowshoed in both of these races.  But the Timm’s Hill Trudge did nicely as a consolation race for those who qualified for the USSSA Championships but weren’t able to go.

The start for both races (10 a.m. for the 7-mile, 10:05 for the 3-mile) began with a cannon shot and an icy sprint before turning into a path of hilly and melting ski trails.  The traction was good enough to run fast times although the melting snow produced a small cave-in with each step, as the multiple rolling hills tested your fitness at the end of the snowshoe racing season.  The races were billed as a 3.5-mile and a 7-mile, but due to the warm conditions and course direction the race distances were closer to 3-mile and 10K lengths.  The 7-mile was originally destined to climb to the very top of Timm’s Hill, the highest point in Wisconsin, but this out-and-back section was cut short due to the lack of snow nearing the peak.  A couple of runners still chose to run to the top to not short themselves of calling it a 7-mile effort.  The finish for both races was a flat 2-minute sprint across Bass Lake, with eight pairs of traditional snowshoes stuck vertically into the ice to highlight the end of the race.

The overall winner of the 3-mile race was Kyle Schmidt, 34, who has won this race now three years in a row, declared, “the course was great, nice rolling hills.  I felt great – this was a personal record for this course.  I won here the last two years – this is like my home turf here (he’s from nearby Catawba, WI).  This race motivates me more than the rest – (there’s) a lot of fun hills.”  Displaying their trophies here are Kyle Schmidt and Michele Brost. 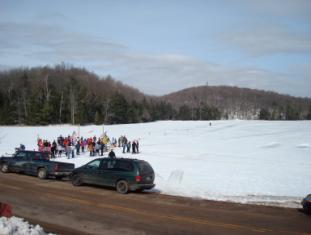 Jeremy Jonas, 31, ran the 7-mile event (in 1:02:26) and gave insight on the course, “the course was very hilly and very demanding.  It was the most challenging course of the year.  The temperature (in the 30’s) wasn’t too warm and it didn’t work to an advantage or disadvantage for me.”  When asked if the race became a solitary challenge after the competitors became strung out, “I didn’t see anybody after 2.5 miles and I was pretty much alone from there to the finish.  I thought it was a pretty good course though – I’ll know what to expect my next time running it.”  It was Jeremy’s first trek to Timm’s Hill to run in this race, and he placed 6th overall in the 7-mile out of nearly 40 entrants.  Kris Borchardt and Jeremy Jonas stood at the entrance to the Snowshoe Lodge (where registration and awards were held) with another snowshoer “standing guard” at the entrance to the side of them. 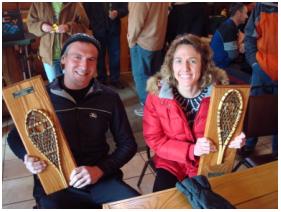 After the race there were free barbecue sandwiches and beverages for racers, and for dessert the best brownies in the Northwoods were there to be devoured.  The awards ceremony left no one without a medal, as some age categories went 6 deep to champion the racers for their efforts on the hills.  The trophies that went to the overall winners were unique – they were stained and finished 8”x 36” boards of wood with a miniature snowshoe displayed in the center of it along with a small plate stating “Overall Champion.”

The race was well set up and put on by race director Kathy Blomberg, who stated, “There were 120 overall entrants, up a little bit from 2008.  It was warmer this year and the times were faster due to the racers needing to wear less.  We were a little bit worried due to how warm it got – but it ended up okay.  It was slushy and icy at the top of Timm’s Hill so we couldn’t race to the top of it (for the 7-mile).”  Kathy was satisfied with being able to run the course this year, “I got to run the race and it was a really fun run.  This is the 14th year of the race and I was glad to be able to run it this year after missing it last year”.  The race originally started in the Rib Lake area in the late 1990’s and moved to this location a little further north a few years later.  Kathy is photographed here promoting the race. 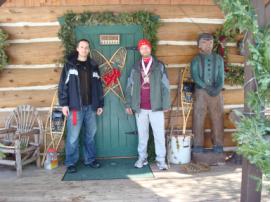 As long as they keep this race going every year in early March at Timm’s Hill, their competitive field will keep growing and growing.  Unfortunately, this year it fell on the same weekend as the USSSA Championships but maybe in following years this race could be used as a final tune-up a week before the big one.  One surely can’t miss this unique race, tucked in the high hills in the Northwoods of Wisconsin at a time of the year that lets you know that your snowshoeing window is about to close with the melting temperatures and early daylight savings time approaching.  One will walk away thinking highly of this race, looking forward to tackling the hills the next time they do the Timm’s Hill Trudge.

Results for the Timm’s Hill Trudge should be available on either www.cutemoose.net or at www.highpointvillage.com.

Comments or thoughts about this race or story?  Email kris.borchardt@ingenixconsulting.com. 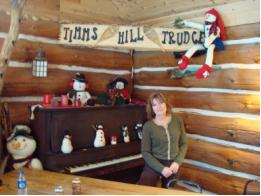