Anyone who has hung a pair of antique snowshoes over a fireplace can appreciate the artistry of classic wooden designs. The graceful bentwood and the intricate lacer’s art are fine examples of form and function. But aesthetics are not generally why snowshoes are found in museum collections or special exhibitions. They usually appear as artifacts from by-gone eras in historical or cultural displays, or in paintings of historical events. To the casual museum-goer, they are just part if the show. For ardent snowshoers, however, looking for a snowshoe or two somewhere in a museum is like a scavenger hunt. It’s a game I really have come to enjoy, searching for snowshoes in art and snowshoes in reality in museum of all sorts.

Many museums in northerly climes and mountainous regions have put snowshoes on display. They start in antiquity, with really ancient snowshoes. On this continent, the oldest shoes trace how North America’s native peoples traveled across the snow. The museum/visitor center at Colorado’s Mesa Verde National Park, for instance, owns one wooden snowshoe, a remnant of the Anasazi (or Ancient Ones) who long populated mesa-and-canyon country. However, the snowshoe is not often displayed. 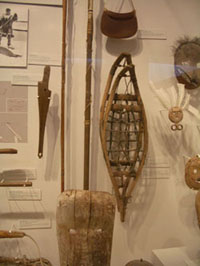 The people who dwell in arctic regions today, as well as those who migrated southward, are straightline descendants of ancestors who might quite possibly have crossed from Asia on the Bering land bridge on – you guessed it – snowshoes. As they moved southward, they developed and refined finely crafted wooden snowshoes of various shapes to meet the needs of various kinds of terrain and snow conditions.

European trappers and traders adopted these more evolved designs as they learned to cope with the challenges of traveling in vast snowy regions through long winters. While visiting the Museum of the Rockies at Montana State University in Bozeman some years ago, I was captivated by the powerful images by painter George Caitlin of Indian hunters on snowshoes bringing down deer and even bison in the 1830s. The Anchorage Museum of History and Art displays snowshoes as part of their extensive collection of Alaskan artifacts and also in their painting galleries, and their large painting of “The Trapper” by Sydney Lawrence is powerful as art and as history.

More often, university museums put on exhibitions with an anthropological or other scholarly twist – many temporary and too rarely sent on tour. The Hudson Museum at the University of Maine, Orono, for instance, has mounted an exhibition called “A Gift from the Gluskabe.” Its features include a fine collection of Maine-made snowshoes from the mid-19th through early 20th centuries, including those famous ones crafted by A. M. “Mellie” Dunham and W.F. Tubbs of Norway, Maine, as well as snowshoe art and even contemporary snowshoes. Similarly, the Logan Museum at Wisconsin’s Beloit College recently mounted an exquisitely titled exhibition called “Floating on the Surface of the Softest Snow: Native American Snowshoes.” It showcased fine examples of Native American snowshoes originating from groups such as the Kutchin of Alaska and the Montagnais of northern Quebec. 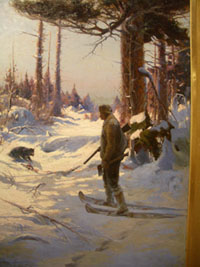 A museum doesn’t have to be large or imposing to include a snowshoe or two – and it’s more fun than you can imagine to discover one. The Tread of the Pioneers Museum in downtown Steamboat Springs, Colo., includes imposingly long snowshoes in its displays of 19th-century pioneer life in the Yampa Valley. The small collection at the visitor center at St. Mary’s Mission near Missoula, Montana, exhibits a painting depicting an arduous winter trek on snowshoes. Snowshoes are casually put out at the American West Wax Museum in Thermopolis, Wyo. Farther west, you can find snowshoes at the Western SkiSport Museum, underwritten by the Boreal Ski Area.

Soldiers have also used snowshoes for winter warfare. It is thought that Alexander the Great’s soldiers might have moved across the snow on wooden hoops with flotation platforms of woven rush – though I truly doubt that any remain in even the most obscure archaeological collections. We do know that snowshoes were used in colonial times during the French and Indian Wars. The New York State Military Museum has documented a battle in 1758 that it calls “Frozen Fury.” The fabled 10th Mountain Division, known as American’s World War II “ski troops,” in fact also used snowshoes. Their story is told at the Colorado Ski Museum in Vail.

North America doesn’t have a monopoly on old snowshoes. I’ve seen them on the walls and in diorama settings in Alpine museums in such towns as St. Moritz and Zermatt, Switzerland, and Chamonix, France – and I suspect that if I were to visit north-country museums in Scandinavia, I’d find snowshoes there too. 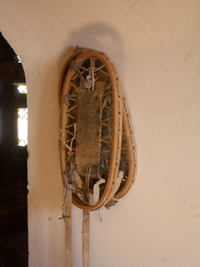 Hudson Museum, University of Maine, 5476 Maine Center for the Arts, Orono, ME 04469; (207) 581-1901. For a description of the museum’s snowshoe exhibition, see http://www.umaine.edu/hudsonmuseum/Online%20Exhibits/Snowshoes/intro.php. 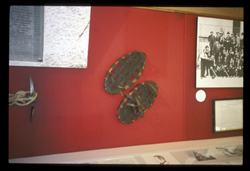