The “family that plays together stays together” is a good adage for why snowshoeing as a family can be an enriching activity to foster healthy values and enrich relationships.

In 2005, author Richard Louv made an impact on a movement to get children connected with nature. In his book “Last Child in the Woods: Saving Our Children from Nature Deficit Disorder,” Louv identifies the current value of nature as an abstraction rather than a reality for children who are increasingly becoming disconnected with the natural world around them. Louv implied that this situation can and should be reversed by having children return to experiencing and appreciating nature. 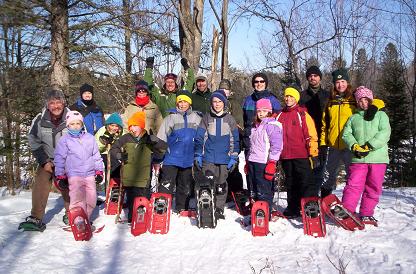 He goes a step further by recommending parents explore nature with their children when he wrote, “It’s a good thing to learn more about nature in order to share this knowledge with children; it’s even better if the adult and child learn about nature together. And it’s a lot more fun.”

This past November 2010, Wisconsin Congressman Ron Kind introduced in the U.S. House of Representatives, a new bill that would support government plans to connect children with nature. The Moving Outdoors in Nature Act (or the bill H.R. 6426) was created to help get America’s children active and healthy by supporting outdoor recreation programming, initiatives and learning.

And Congressman Kind’s bill was in line with President Obama’s America’s Great Outdoors (AGO) initiative to reconnect children and families to recreation, conservation and the outdoors. In April, 2010, Obama signed a Presidential Memorandum stating that the AGO will “promote and support innovative community-level efforts to conserve outdoor spaces and to reconnect Americans to the outdoors.”

Considering these concerning statistics, it is apparent that the above political interests as well as the pleading words of Dr. Louv support the importance of getting kids outside. It is equally important to have parents take their kids outside to help foster outdoor values and interests. In the same participation report, kids ages six to 12 were asked, “What motivates your decision not to participate in outdoor activities?” One of the top responses was, “My parents don’t take me to go on outdoor activities.”

With all this in mind, my concern as a snowshoe enthusiast and educator is to get kids and their families outdoors in winter. On the upshot from the 2010 participation report is the good news that, “participation in outdoor recreation among youth increased in some outdoor activities in 2009, including snowshoeing (up 26 percent).” What better opportunity to get kids and their parents outside during winter than to put them on snowshoes.