It’s hard for a first timer to wrap a word around one’s first national snowshoe championship race. Maybe hard is a good place to start.

It was hard to get to Salt Lake City, Utah. I had to snowshoe through Pennsylvania to get qualified and then gain some more winter triathlon experience in Germany’s Black Forest before thrashing the gear together to get out for Xterra. Right up front, I’ve got to tell you that Ed Myers’ helpful advice saved me in several ways.

It was hard to get to Snowbasin Resort. I arrived near midnight and learned the hard way about shuttle transportation to Ogden. There wasn’t any. Can you believe a guy that I asked about shuttles simply said, “You going to Ogden? C’mon with me and I’ll drop you off at the Marriott.” That was my introduction to the friendly folks of Utah. It grew with smiles and helpful assistance with each person I met. That was the easy part, and it wasn’t hard to admire.

Being a PowerSox Snowshoe Nationals rookie, I was intensely interested in the ‘mobile load bearing’ part of the race: the snowshoe. I asked about a thousand questions at the Xterra Expo. All were answered in great detail. I learned about the exciting new ergonomic advantages presented by the Easton’s Snowshoe Product Manager, Christopher Pietrzak. Eric Bernard took me to Redfeather snowshoe school to clue me in on their latest products. The racing, dynamic Dion duo talked and demonstrated the unique advantages of choosing their interchangeable frame, binding, and cleats for their custom built snowshoes. And, Jake of Crescent Moon not only explained his runner-friendly snowshoe, he loaned me a pair for the race.

This is where Ed Myer’s advice really paid off for me. Ed advised that a narrower, lighter snowshoe tracks better with a runner’s stride than a wider, longer one given the type of conditions we found at Snow Basin. Utah’s famous deep powder snow might advantage a slightly longer, wider snowshoe, for example. I raced the Crescent Moon’s and they definitely helped. 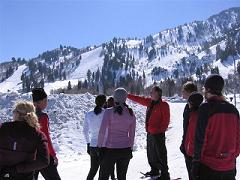 There are several other “lighter-wider snowshoe racers” available with running flats hard bolted to the frame similar to Atlas, Dion, and Ed’s Northern Lights. Crescent Moon’s met my immediate racer-runner-friendly needs with their foot glove system (similar to the pedal adapters used for wearing race shoes on the cycle segment for duathlons and triathlons) and their single pool loop retaining system which is super fast for transitions. I’m not saying any snowshoe is best — how would I know with my heaping six weeks of experience? — but I sure would like to race in some more models before next year’s national championship. This gives every gearhead a chance to buy shiny new stuff for a real purpose. Maybe it’s kinda’ like golf or bow hunting. You need a bag or quiver of snowshoes that are runner-friendly, racer-friendly, and hiker-friendly. I can already tell the differences; my bag and quiver only have runner and hiker-friendly members.

Key to success was the race recon Mark Elmore provided before race day. Mark took us through the course in considerable detail. He should know. He tramped it out, marked it, tested it, and made sure we knew it from the ground up (no pun intended). For me, it was kind of like race director Frank Gaval’s course at the Pennsylvania State Championship Snowshoe Qualifier with a kilometer or so jack under the Nescopek hills but with thinner air. Like Frank, Mark made perfect use of the terrain without any compromise whatsoever. We saw a lot of Snow Basin and some of the hills more than once. The real deal.

My departure flight schedule was hard. And an important pacing factor for the race because I had to ‘git-er-done,’ get to the Salt Lake City Airport, and catch the first flight to Denver so I could make a working breakfast at the Pentagon the following morning. Hard to be working, but no worries — Jake’s Crescent Moon’s would get me there.

You’ve already read about our magnificent weather, the elite racers, and the course. But, not a mention of the warm up or the warm down. You bet we warmed up. Some by walking up to the start area. Others ran up in snowshoes. I warmed up using my Yaktrax Pros alongside the parking lots, like Josiah Middaugh used for the Xterra run course, and then walked up to the start line in the snowshoes. I didn’t see anyone wasting excessive energy warming up.

We lined up and ran down the hill we would see twice later when completing the first loop we had scouted with Mark. No worries, hard going out on the single track, but great fun. Hard coming back when the altitude kicked in kind of like an anvil chained around the neck. I shifted to the diagonal striding that we use in Nordic Walking only without the poles to maintain some minor momentum, but was giving back time when I got on the green course section used by Xterra. 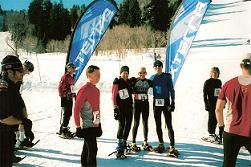 What do they say about first impressions? Spectacular! Catwalks, steep drops, where you could glissade if you lost your footing, and very loooong downhills for max speed, then back up and around to get back up the finishing hill. Mark’s advice to stay on the single track carried with it the sting of becoming a possible menu item for those who strayed. I was taking the downs fast, but was caught by Richard Lovett each time, and passed, on the steeper ups. Definitely a learning experience that will serve me well in future races.

Running up to finish at “Grandma’s House” with the red roof was hard, but exhilarating. It was hard not to forget my tight flight. So I ran right on through the finish line, down to the lodge, handed off my loaner Crescent Moon’s to Jake, jumped into the rental, sped to SLC to drop the “Enterprise’s good ship” rental car and ran across the skybridge to slam into the security check line still wearing my race number, wet running shoes with dry PowerSox, and a liberal coating of orange Gatorade. According to CNN, Salt Lake has some of the best airport security in the US. They did not compromise their reputation by checking me out to include dusting my Redfeathers. Got through OK, changed into hiking gear, repacked and settled down for — a delayed flight. (OK, I’ll answer “Why the delay?” The 737’s forward lavatory had a leak. Right . . . the return flight was hard.)

It was hard not to laugh when the boss asked, “What did you do this weekend?” Learned a ton and had a great time, that’s what. Thanks Mark, Ed, Dave, Frank, Jake, Janet, Eric, Chary, Denise, all the other racers, Xterra, PowerSox and anyone living in Utah.

No worries, I’m not going to Disney Land — I’m going to La Ciaspolada! I’ll see you all there.

One final, closing comment: I did not have the pleasure of knowing Dave Sykora’s friend Tim Dusick. My loss, but I’m sure we’ll see him out there also.