The rumors are true. Arizona gets snow. For people living up in the Northland, in and around Flagstaff and the Coconino National Forest, winter is not that much different from winter anywhere else: It’s cold, we slip on the ice when we’ve had a few-too-many, and we shiver, too. In fact, this winter has been the second wettest winter on record, with 23.7 inches of precipitation since Sept. 1. For the Peaks District of the Coconino National Forest, that has meant snow, snow, and snow.

Back in November, before the bulk of this season’s snow blessed the Earth (we had perhaps eight inches of day-old snow at mid-mountain), my girlfriend and I attempted a winter ascent of Mt. Humphreys – the highest point in Arizona, easily visible from eighty miles in any direction – which weighs in at 12,643 feet above sea level.

Leaving the AZ Snowbowl parking area, we took Humphreys Trail No. 151, a fairly strenuous 3,350-foot elevation gain over the 4.5-mile course of the trail. At the trailhead, fallen snow was light (a couple of inches perhaps) on top of a base of hard-pack and ice, with intermittent snow showers in the forecast. The trail was, for the first mile or two fairly tracked out – snowshoes were unnecessary, a burden really, so we pulled them off and carefully negotiated the icier sections of trail.

The scenery and conditions were beautiful: A well-tracked trail through new-snow-shrouded ponderosas; light, champagne-powder falling gently among the pines; and not a sound to be heard save the wind singing in the trees, the tatter-tat of the occasional woodpecker, or the chattering of the odd squirrel.

At about the two-mile mark, the fresh snow became deep enough to require bigger shoes. So we paused a moment to strap them on. We took this opportunity to venture about a dozen yards off the trail and check out the Snow Boulders – a field of volcanic rockslide, situated about halfway up the northwestern face of the San Francisco Peaks – and the view out over the Coconino National Forest that their clearing afforded.

We were just below the level of the clouds, visibility was fairly good despite the light snow falling, and we could see snow-capped Kendrick Mountain off in the distance, with its 10,418-foot summit disappearing into the clouds. We sat in the snow and shared a sandwich before setting off again. 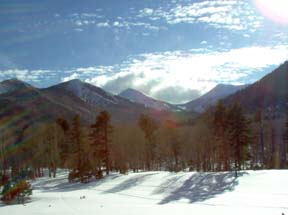 From here, the trail grew steeper, and we entered a long series of winding switchbacks. We spoke little as we ascended the mountain, up into the clouds – just took it all in, and worked. At some point, unbeknownst to me, the rear outer corner of my binding came up off its base – a rivet just popped, allowing my foot to slide up into the toe-hole, against the toe-bar. Moving uphill, the effect was minimal: Just a little bit of lateral movement on left-slanting grades.

As we neared the tree line, the winds became horrific violent and gusting, driving the snow into any exposed skin. It felt like crushed, frozen glass driven from a sand blaster. We pulled up our hoods, cinched them around our faces and pressed slowly on.

At this elevation, the winds blew much of the snow around, leaving variously broad sheets of ice and heavy drifts among the twisted and bent bristle-cone pines. The footing became unsure, and my binding finally began to give me trouble. At about three o’clock, just a hair’s breadth above the tree line, we stopped for water, took a break and eventually decided to turn back.

We expected the descent to take roughly half as long as our ascent (just more than four hours, including rests), which would put us back at the car at about dusk. It in fact took about one-fourth. Enough new snow had fallen on the packed trail behind us (about six inches) that we were able to practically ski down, and while my busted-ass binding didn’t slow me down much, it damn near wore a hole in the toe of my boots. We descended quickly, in silence, with wind chapped faces and lips, craving nothing so much as a frosty pint of beer.

Later that evening we met up with some friends at the local pizza-pub, “Alpine Pizza,” and shared our sorrow at not having made the summit. They were, for the most part, unsympathetic. Clichés were offered up, as a semi-sincere form of commiseration and encouragement, “Better luck next time,” and “You shouldn’t worry about where you’re going, just enjoy getting there,” and “Suck it up. Quit whining, you babies.”

The censures were more heartfelt, more real. So, in the following days, we plotted and schemed to mount a second, more ambitious assault at a later date, when the snow was more plentiful. The plan went like this: It would be a bigger, longer, and generally more awesome one way trek beginning on Forest Service Road No. 552, at whatever point it became impassable, up three or four miles to Inner Basin Trail No. 29.

From there, it’s 2.6 miles up Inner Basin to Weatherford Trail No. 102 (two miles), which meets up with Humphreys Peak Trail No. 151 about one mile below the summit. We’d then take No. 151 back down to Arizona Snowbowl, Agassiz Lodge, and two 20 ounce plastic cups full to the brim with delicious Oak Creek Nut-Brown Ale. Total one-way travel would be about 12 gloriously (hopefully) untracked miles, depending on the road conditions in the forest.

Now, three months after our first attempt at Mt. Humphreys’ summit, I can attest to two things: 1) From the highest point in Arizona, you can see from the Grand Canyon to Sedona’s red-rock spires…from the Painted Desert to the edge of the Colorado Plateau; 2) A cold glass of brownish-golden, moderately hopped beer tastes much better after eight hours of slogging out fresh tracks in the white stuff. 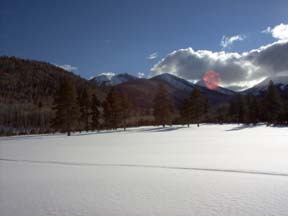 Things You Should Know:

As of March 5, Arizona Snowbowl (the Peak District’s only ski resort) reports 81 inches of settled snow at 8,500 feet, and 138 inches at 10,800 feet. The San Francisco Peaks’ reliable snow season generally runs from mid November until mid April, but in a wet year good snow can last till the end of May. Snow is usually heavy and dense at low elevations (6,000 to 8,000 feet), becoming lighter as elevation increases.

Backcountry Permits are required in the Katchina Mountain Wilderness from mid-December till late March. Permits can be obtained at either the Mormon Lake Ranger Station or the Peaks Ranger Station from Monday through Friday, 7:30 a.m. to 4:30 p.m., or at the Agassiz Lodge at Arizona Snowbowl 9 to 11 a.m. on weekends and holidays. The permits are free of charge, and valid through the entire winter season.