The best known of these mountain ranges is the Southern Alps (Ka Tiritiri o te Moana).  This is the main alpine range on the South Island and rises directly from the sea on the west coast. The range culminates in the summit of Mt. Cook (Aoraki) at 3,754 meters (12,316 ft).

The initial colonizers of New Zealand were the Maori. Thus, where possible, the Maori names are presented to complement the better-known anglicized names. So, New Zealand is Aotearoa in Maori.

As seen in The Lord of the Rings trilogy of movies, stunning scenery is easy to come by. Also, there is a long and proud tradition of self-reliant mountaineering here, too, with Sir Edmund Hillary and the first ascent of Mount Everest as its epitome.

Accessing the high country in New Zealand can form the biggest difficulty in any trip. So, popular venues for snowshoeing tend to develop around the access routes provided by the ski resorts. Or, you can use helicopter access for more remote adventures.

Arguably, the finest accessible snowshoeing terrain is on the Pisa Range in Otago, on the South Island.  There are daily direct international flights into Queenstown’s international airport. Also, you’ll find a wide range of accommodation available there or in nearby Wanaka.

Queenstown’s reputation as the adrenaline capital of the Southern Hemisphere is well-deserved.  Visitors can select from a wide range of adventurous activities to complement their snowshoeing trip. 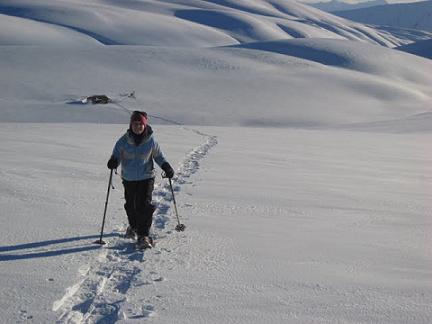 Our exploration of New Zealand snowshoeing begins at the dedicated Nordic sports facilities of the Snow Farm NZ above the Cardrona Valley, between Queenstown and Wanaka. Situated at just over 1,530m (5,020 ft), the centre provides straightforward access to explore the rolling terrain and high alpine plateaus with their schist tors.

They also provide information on conditions, rental facilities for snowshoe equipment, accommodation, and meals. In addition, a network of backcountry huts allows adventurers the prospect of extended mountain journeys. In fact, the highest point of the range, Mt. Pisa at 1,964m (6,444ft), is easily within reach of a fit and capable party.

To meet the increasing popularity of snowshoeing in New Zealand, a network of snowshoe routes of various skill levels uses a European style of signage within the Snow Farm boundaries. Also, the competitive enthusiast can engage in snowshoe biathlon or cross-country ski races.

However, it is the attraction of the terrain outside of the Snow Farm, which is the biggest draw for any experienced snowshoe enthusiast.  This rolling terrain holds the key for snowshoeing here, rarely reaching the critical angles for avalanches and with few objectively dangerous terrain features.  Thus, the possibilities for ascents and descents in snowshoes are limited only by the imagination.

Read More: Why All Snowshoers Should be Avalanche Aware (Even Beginners) 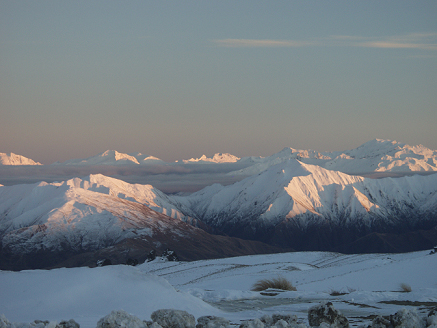 I am always reminded of the arctic tundra of Scandinavia or the Grampian Cairngorm in Scotland when leaving the Snow Farm. Photo: Jan Bailey

When leaving the environs of the Snow Farm (make sure to pay the vehicle fee) on a journey to reach Mt Pisa, I am always reminded of the arctic tundra of Scandinavia or the Grampian Cairngorm in Scotland.

The schist tor summits on these block mountains, typical of Central Otago, are the remnants of New Zealand’s original peneplain landscape upthrust by tectonic plate collision.  It is a treeless alpine environment in white ermine powder. Beneath it, alpine plant communities struggle to maintain their existence in the harsh winter conditions.

However, they aren’t the only evidence of nature here. You’ll find that chamois, goats, wild pigs, hare, rabbits, hedgehogs, and wild cats roam freely. Gold miners left their marks here too. Somehow they managed to retain a toehold in the frozen land while sifting the underlying alluvial deposits for the mother lode.

Our initial descent is into the headwater area of the Roaring Meg stream (the boundary between Snow Farm NZ and the Pisa Conservation Area). The headwater itself is named after another gold-mining pioneer.

Then, we ascend the slopes above the headwaters. The terrain allows the line to reflect the conditions underfoot, with the freedom to improvise and explore the possibilities. The defining features are the watercourses, acting like handrails to the ridges thrown down from the high plateau.

As with all good ascents, the first view of the summit is denied until earned through commitment to the challenge.  The parade of false summits falls away as the vista unfolds, north to Mt. Cook, west to Mt. Aspiring – the southern Matterhorn, east to the Old Man Range, then finally south to The Remarkables.  There is time to linger and savor the moment before heading back down to the rewards of shelter, food, and company. Perhaps a local appellation vin chaud at the hut or the Nordic Center?

For guided ascents and treks, Aspiring Guides run guided snowshoe tours to the summits of the Pisa Range and elsewhere in New Zealand. 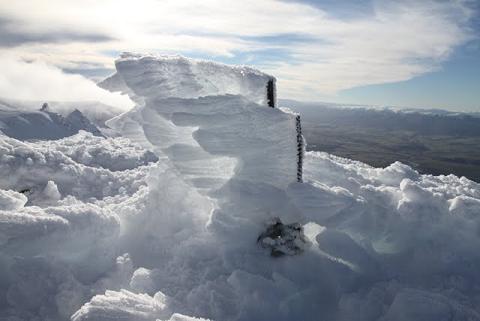 Whether exploring the Snow Farm or Mt Pisa, an overnight stay in a backcountry hut extends the time spent here, with accommodation options to suit all budgets.  An early start rewards the diligent, as the finite winter light holds the prospect of time for photography and an unforced descent.

The changeable, maritime climate, snow conditions ranging from powder to refrozen snow/ice, and the prospect of committing yourself to this environment combine to provide the challenge. But, then, the spectacular 360-degree mountain panoramas of the South Island, the environmental aesthetic, and that sense of immense personal satisfaction are the ultimate reward.

Read More: Why You Should Use Snowshoes on Your Next Mountaineering Adventure 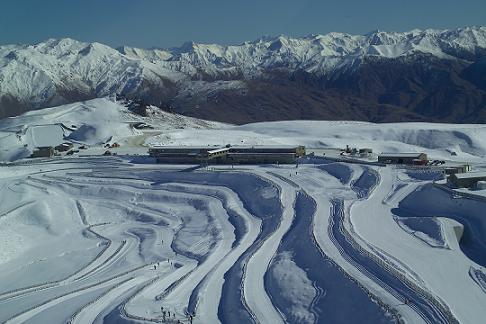 Have you gone snowshoeing in the Pisa Range of New Zealand? Or would you? Please share your thoughts with us in the comments below.