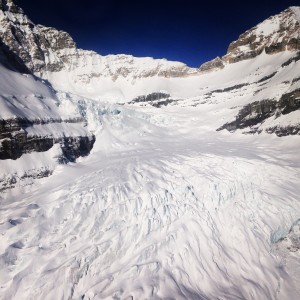 I’d heard of heli-skiing and even heli-biking, though I’d done neither. But heli-snowshoeing? It seemed to border on contradiction, like heavy metal yoga (which does, in fact, exist at a studio in Atlanta, where I live). But I was booked on a helicopter trip to a beautiful, remote mountain pass on the edge of Banff national park, in Alberta, Canada, which would have been all but impossible to reach any other way—short of sled dogs, which I didn’t have—in this, the dead of winter.

The plan as outlined by our outfitter, Rockies Heli Canada, was to enjoy overhead views of one of the most spectacular parks in North America—and the oldest in Canada, boasting more than 2,500 square miles of forbidding and fantastical mountainous terrain—before experiencing the park at ground level, wearing snowshoes stowed away in one of thechopper’s hidden compartments beneath us.We would see it as birds and as humans.

The flight itself, from an airfield on the edge of 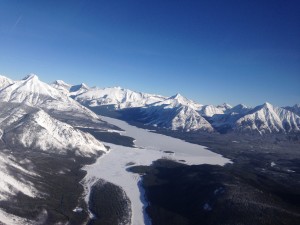 Canmore, in a place called Kananaskis, lasted perhaps fifteen minutes. We zoomed over cloud-enshrouded cliffs, castellated mountaintops and a frozen 900-foot waterfall. We learned about glacier-carved geologic formations, Native American inhabitants of the area, and even a former World War II prison camp, where the captives were supposedly allowed to hike around the surrounding peaks without their shackles because there was little chance of them escaping the sub-zero winter temperatures.

It was a bluebird day with temperatures in the low twenties—positively balmy!—and, fortunately, we’d have a ride out from our final destination: Marvel Pass. 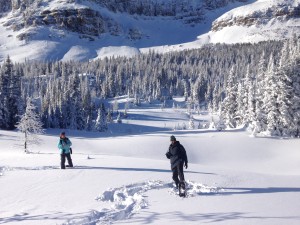 and experts alike, and upon landing just outside the park’s borders—it’s not legal for helicopters to land in Banff itself—we all set about strapping our shoes on, some more slowly than others. Looking around Marvel Pass, it was clear why the helicopter had been necessary. There were no roads, or even trails, for miles. Just mountains and a frozen lake covered in ice and snow, big enough for an expert pilot to land on. Our pilot—now, poof, our guide—tossed a backpack on and instructed us to follow him for a trudge through knee-deep powder where no humans appeared to havebeen for quite some time.

I marched up front and helped break trail, taking long, high-kneed steps through the endless fluffy 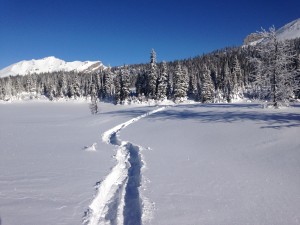 stuff. It was slowgoing—in part because of the breathtaking cold—but the views were plenty rewarding. The sensation was that of being a pioneer in the mythical winter kingdom of a bygone people. At least, that’s what my overly active imagination did to me.

As we circled the lake and then descended a short embankment, someone got the idea that it would be fun to race down. Soon there was a pile of overturned humans, who, after some laughing, found it harder than expected to right themselves. A few minutes later, our well-timed guide broke out the large thermos of Kahlua-spiked hot chocolate in his pack. We gathered around and passed the hot beverage to one another. I know everything tastes better in the outdoors, but this stuff was incredible. I greedily downed two cups. 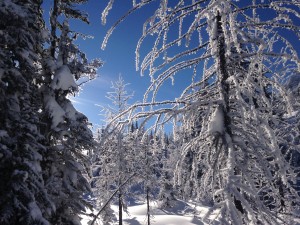 Emboldened by the liquid courage, I took off on a solo mission to investigate the local fauna. There were plenty of tracks—foxes and elk, mostly, though I tried imagined wolverines and lynx—but no animals were to be seen. The one clear downside of riding into a wild place like this on a helicopter: everything living nearby sees and hears you coming and takes off for safety. Still, having now put a few stands of fir trees between me and the rest of the group, I felt intensely, exhilaratingly alone in nature. I sat down and admired the crystalline structure of the snow, the pattern of the bark. Through the boughs of the trees I could just make out the alien wingtip of our aircraft poking out, DayGlo orange, in the cloudless sky. I took a while to return to it. 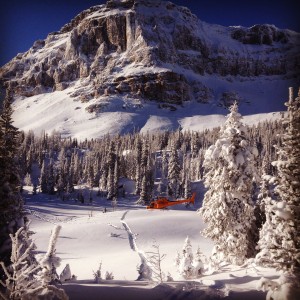 Back in the chopper, with our snowshoes stowed away again beneath us, we rose off the ground in a momentary blizzard of windblown snow and, in less than a minute, were five hundred feet above the place where we’d just been walking. The wind blew away our giant footprints, I figured, leaving Marvel Pass untouched for the next group of pioneers in snowshoes to stand in awe.