Understanding El Niño and its effect on snowfall in North America

El Niño is a massive atmospheric-oceanic interaction over and in the Pacific Ocean. It tends to cycle between neutral, positive, and negative conditions every five to seven years.

During neutral El Niño conditions, the Walker circulation prevails, and: 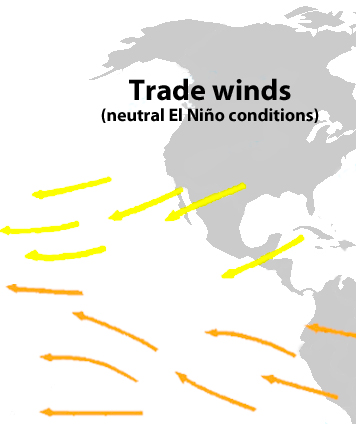 Under neutral El Niño conditions, the trade winds blow from the coasts of the Americas towards the equator. (Image courtesy of Wikimedia Commons.)

During positive El Niño conditions, the Walker circulation weakens or even reverses. This has an effect on the Pacific and Polar jet streams, which can lead to atypical winter temperatures and precipitation across North America. 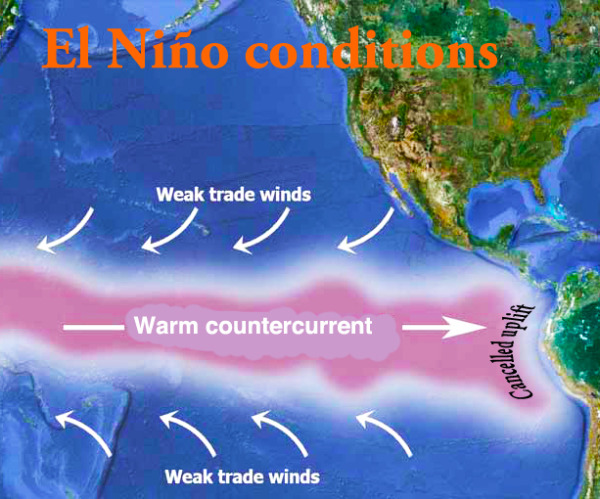 Under positive El Niño conditions, the easterly trade winds weaken or even reverse and warm water flows from the western Pacific towards the coast of South America. (Image courtesy of Google Earth via NASA.) 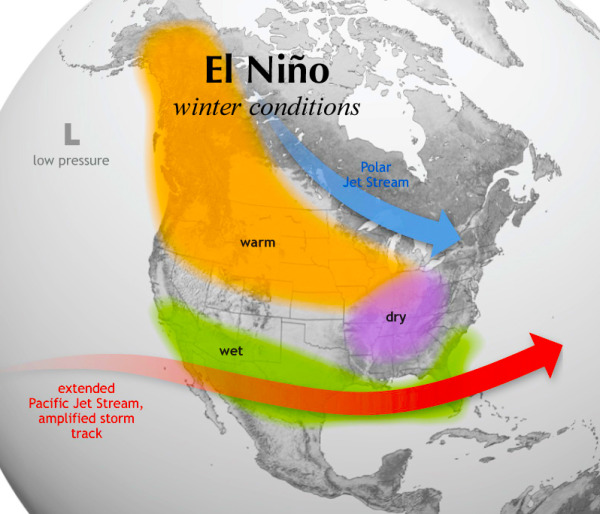 What do El Niño conditions mean for North American snowfall?

El Niño conditions during North American winters tend to, with the emphasis on tend, result in predictable temperature and precipitation patterns on a region by region basis.

El Niño’s effects on winters in the Midwest and Mid-Atlantic seem to be less consistent than in other regions. It does seem to often to be the case that the Ohio Valley and lower Great Lakes tend to experience drier, warmer than usual seasonal conditions during El Niño winters. This means light snowfall across much of the Midwest and mild conditions for Chicago.

The uplands of Southern California, Arizona, and New Mexico tend to experience above average snowfall during El Niño winters.

The mountain and interior Pacific Northwest tends to see less snowfall under El Niño conditions as temperatures are typically a bit warmer than usual and the Jet Stream has directed moisture towards the coast of California.

Reading signs of emergent positive El Niño conditions is iffy at the best of times, but this year has proven especially dicey.

In April the online science writers were drawing clicks with talk of the possibility of a “monster” El Niño for the coming winter comparable to the massive 1997 El Niño. By June this talk had turned to head-scratching over the disappearance of the early spring signals of a strong El Niño.

By early September came word that the “stalled El Niño is poised to resurge.” On October 9 the Climate Prediction Center called for a 60–65 percent chance for the development of a weak El Niño. In the latest CPC prediction the likelihood has been dropped to 58 percent.

As the solstice nears, my 2014/2015 snow play looks less and less threatened in southern New England, as does the seafood catch off the coast of South America. But both I and the fisherman will be keeping our fingers crossed.