A yurt is a sort of Mongolian wigwam. Hannibal crossed the Alps in one. Santa Claus’s elves live in yurt communes, the little hipsters. And my adult family spent last Christmas in a yurt just seven miles south of Lake City, Colorado. At a rarefied 11,600 feet, our yurt was sturdy and warm with carpeted floor, high roof and splendid window views of the snowy San Juan Mountains. There’s a skylight, too, and at night you can watch the stars turn as you doze off. I saw constellations that I haven’t seen in years. 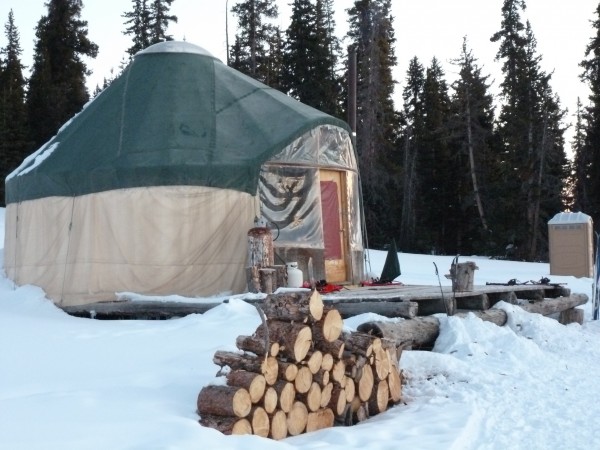 Our Rambouillet Yurt, a deck that’s high and dry, plenty of fuel, and a privy.

The day before Christmas, we donned snowshoes in one of the free parking areas next to Highway 149, then shuffled five miles right alongside the Continental Divide toward the Rambouillet Yurt. Under bluebird skies, we crossed Rambouillet Park, a pristine expanse of snow that is reminiscent of Santa’s backyard, but not nearly so treacherous; the trail is well marked at frequent intervals, generally flat, and most of it is above tree-line, so you can see all the way to the Rio Grande Pyramid over in the Weminuche Wilderness; the main point being, you can see where you’re going.

If you’re novices to snowshoeing, the Hinsdale Haute Route is a safe place to get started. Is someone in your group a little timid? The John Wilson Yurt, which overlooks beautiful Lake San Cristobal, is only one-and-a-half miles from the highway, and you can NOT miss the trail. But if you’re intrepid and experienced, you’ll appreciate the Colorado Trail Friends Yurt, so-named because it rests beside the Colorado Trail that runs from Denver to Durango.

Perched atop the steep ridge that forms the eastern wall of the Gunnison River valley, Colorado Trail Friends Yurt is accessible by more-advanced snowshoers. As for the Rambouillet Yurt, I rate it as just right: a little climbing, mostly in the first mile, but gaining only 800 feet overall across the five mile trail. 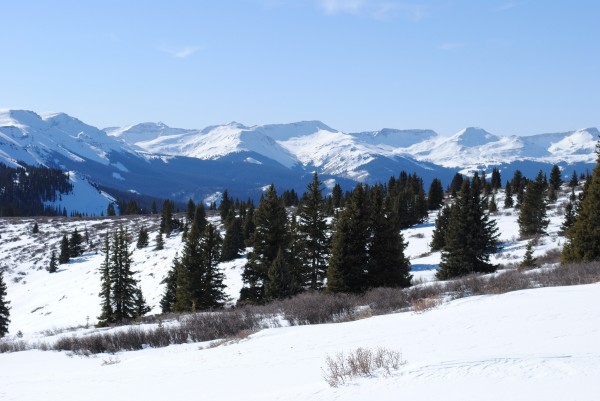 While shoeing up toward Hill 71, we look back and enjoy a view of the east side of the Gunnison River valley and the continuance of the Continental Divide.

Whichever yurt you choose, you will be high in the sky because the trails start at almost 11,000 feet and climb to manageable elevations with spectacular views of the Powderhorn, Uncompahgre, La Garita, and Weminuche Wildernesses. With those vistas in mind, the yurts have been strategically situated atop the eastern ridge of the Gunnison River valley, and connected by a trail that runs along the spine of that ridge.

At Hill 71 to the north, the trail turns a corner and continues along the Slumgullion Ridge which runs east and west. The gentle interior contours of Rambouillet Park are wrapped in the protective embrace of both ridges. You can’t get higher or more remote while staying so safe. The HHR folks even offer a sherpa service and will deliver your stuff by snowmobile if you want to save your energy for sight-seeing

Your yurt is already set up and waiting for you. No need to carry dishes, pots and pans, or fuel. There’s a big wood burning stove for heat, an axe to split the wood that’s already provided, a propane lamp, cots and bunks for sleeping; the yurts sleep 6-8 and easily accommodated our five adults and one dog. Yes, the pooch is welcome. You will need to bring your own sleeping bag and a blanket for your canine family member. 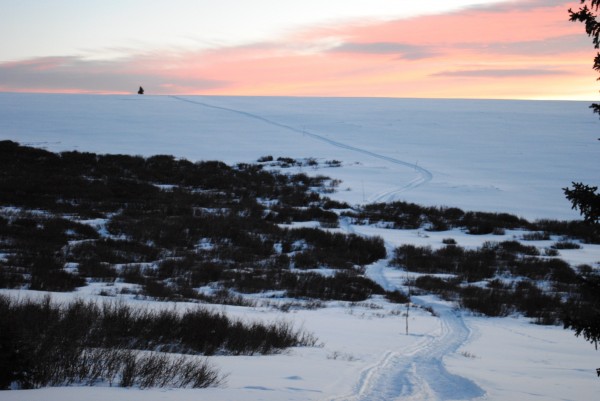 Go the distance! Gazing back at the last mile of Rambouillet Park. Many stakes mark the trail at frequent intervals.

At mealtime, you’ll like the propane gas range and oven that makes a great pizza. Don’t worry about a fridge; you’ll find an ice chest in the yurt, and free snow. Sorry, no running water, but you don’t need fancy plumbing; you’re in the wilderness, camper! Just melt snow on the stove; the HHR folks have provided plenty of BIG pots for that purpose. And speaking of pots, remember outhouses? They have a porta-potty just a few yards from the yurt, very private! My bunch took our own TP, but found that the Hinsdale elves had already stocked the yurt thoroughly.

To pack for the yurt, treat it like a light backpacking trip: clothing, sleeping bag, toiletries, standard safety gear, and food. Don’t forget your snowshoes because snowshoeing is what it’s all about! We tried skis, but the powder was so deep and fresh that only snowshoes worked well for the whole family. 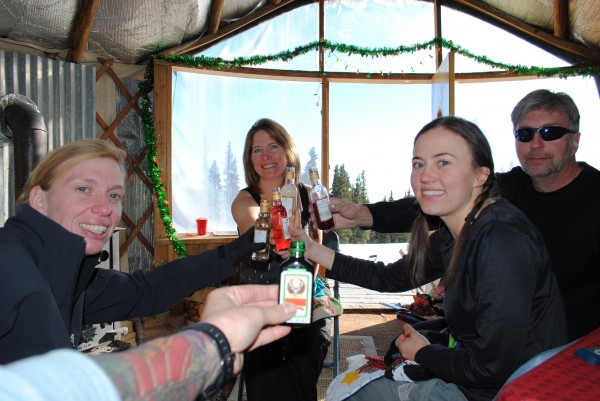 Some things Santa left in our stockings. Cheers!

Since it was Christmas, my family packed heftier meals than we usually carry. I recommend the duck breast confit with sautéed asparagus, sage dressing and cranberry sauce, all of which were easily prepared on Christmas Day given our yurt’s ample kitchen amenities. Other than food and sleeping bags, the HHR folks have stocked the yurts with everything you’ll need — and most importantly at Christmas time — none of the stuff you don’t: No cell phones, no television, no tweets and twitters. No traffic or traffic lights. Just you and the ones you love most, in the wild, across the snow, above the trees, under the stars.

On Christmas morning, my family celebrated by snowshoeing up onto the northern ridge between Hill 71 and Slumgullion Peak, where at 12,000 feet, we discovered sweeping vistas of the entire Gunnison River Valley, Powderhorn Wilderness, and Uncompahgre Peak which sags droopily like — I kid you not — Mount Crumpit where the Grinch lives. 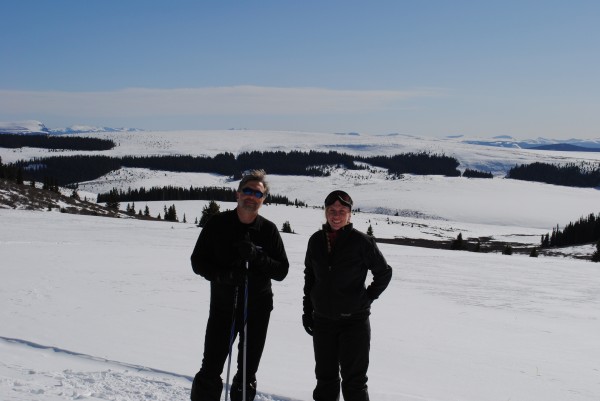 The author and daughter above Rambouillet Park.

Better than the Grinch could have done, this trip had helped us simplify our lives and strip away much that is superfluous and distractive about the holidays. Since there’s a limit to what Santa can truck out to the wilderness in snowshoes, we opted for the traditional stockings this Hinsdale Haute Route Christmas. We hung them by the chimney with care, and the caveat that nobody brought presents that couldn’t share space in a sock.

Best Christmas I ever had.

You can access the yurts through Lake City by way of Gunnison, or you can come from the south along Highway 160 which connects Durango, Pagosa Springs, Wolf Creek and Walsenburg.

The Hinsdale Haute Route Yurts are available throughout the snow season, not just at Christmas. I recommend New Year’s Eve, Valentine’s Day, Spring Break and Festivus. Ask for Jerry Gray. He’s a really helpful person and will forgive you even if your Tibetan Terrier eats a hole in the door of his yurt. 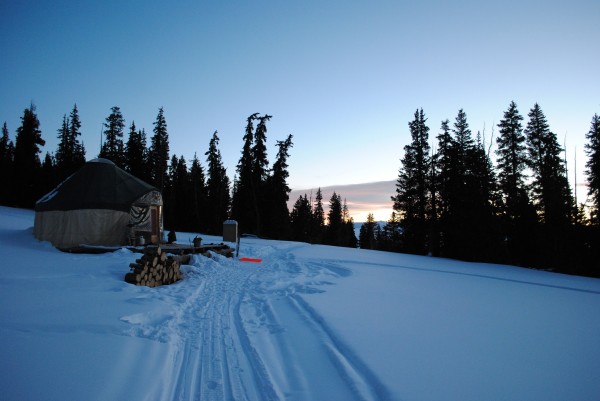