As happens in technology labs and medical devices, breakthroughs bubble up from entrepreneurs just like Deb Kreutzer and her team. Working with tight budgets at her self-described farmette in a rural community and with little outside encouragement, she and her dedicated snowshoe team have gone and done it: Here they are, the world’s first collapsible snowshoes with the just announced name: SnowXu.

No matter how Deb described them, nothing prepared me for the ingenuity and creativity these snowshoes represent. I suggest the word foldable helps describes the “X” frame deck that swivels on a center post to become like a chubby  letter “I” in its closed position. This creative effort, soaking funds like a sponge on water, has the positive feel required in such endeavors. No giving up, perhaps representing some of her Midwestern upbringing in Wisconsin, to the residency now in the “Live Free or Die” State of New Hampshire. Maybe New Hampshire’s nickname of “The Granite State” represents her personal will, too. “I have approached this project totally unconventionally and in defiance of all advice from those who know anything about business.” Some great entrepreneurs like the Google founders said something like this.

Over one year ago, she told me with the initial prototype model due out, “I just wish I had my test shoes here now. With some light at the end of the tunnel finally, I am terribly eager to hold them in my hands and wear them on my feet. Waiting is excruciating.” Now with the latest design parading new and important improvements, she has not changed at all. “The good news is that the latest design is almost finished and has been tested by the engineer who loves it. I am terribly eager to have my hands on a pair of the latest ones.” 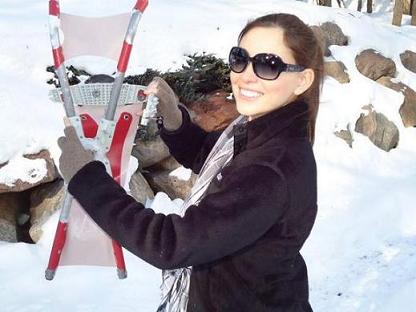 Now, check the first photo with snowshoer Angela Kyle holding one shoe in the open position. Note the clamp locking the deck onto the “X” frame has a key that tightens it so the process of attaching the piece is simple. Deb indicated the design thought was to have “just a flick of the finger open or close them.” Additionally, an innovation representing a popular trail shoe adaptation for snow — screws on the base for traction — replaces out-sized crampons as a source of grip. “We have found through our tests and field trials that, in fact, the traction screws work extremely well; so we will not be adding any aggressive crampons, although we have added some, but will stick with a minimalist approach.”

Now look at the photo of the SnowXu on the snow — several changes have just occurred outdating this look somewhat and are revealed here for the first time. For example, the tips now turn inward. In addition, the rubber footie as a binding has changed to a single, simple strap that will hold the foot more securely, she says, but remains very easy and quick to use. This improvement can help these snowshoes in one of its disadvantages: weight. “I think the final product is going to be lighter, easier, quicker and more elegant as well as extremely functional.”

Shown with the nifty and sleek carrying bag, the compact look is apparent. Ms. Kyle has her hand wrapped around the snowshoes to demonstrate just how small they are when collapsed, perfect for flying them to the March 2011 USSSA National Dion Snowshoe Championships in Deb’s home state of Wisconsin. They should qualify for carry-on luggage privileges, as the crampons new to the design are not sharp claws. 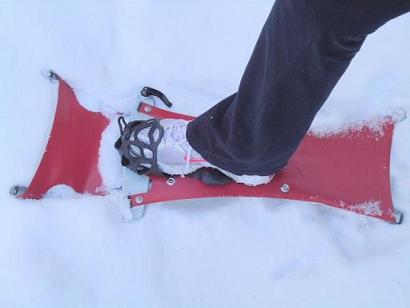 She developed the idea of this snowshoe innovation where ideas can find germination: trekking on snowshoes at one’s own “inspiration hill,” what I call those points on the trail where breakthroughs or new realizations are revealed to the open mind. “I am the ultimate average recreational snowshoer. And I believe I have had every problem with snowshoes that an average recreational snowshoer can have. They are bulky and hard to carry, the bindings frequently are complicated or unreliable, and they are difficult to transport if you want to take more than one person and more than one pair in the car.

As often is the case, I had to choose between taking kids and taking the snowshoes for an outing. Storage is no less a problem if one lives in an apartment or a home that isn’t riddled with odd-shaped storage spaces. I have any number of friends who wouldn’t even try snowshoeing because of those very challenges. A few years ago, in a pique of frustration, I started doodling around with a sketchpad, and I’m no artist. The rest is history.

I was hooked up with a good law firm, then hooked up with a good engineers — two brothers, actually — and a lot of creative energy has been flowing ever since. I have worked tirelessly at my day job in order to finance every aspect of patenting and developing this idea of collapsible snowshoes. I am nearly one hundred percent certain I will not want to be further involved in manufacturing, marketing and distributing the snowshoes. Rather, I am hopeful and optimistic that one of the existing manufacturers — and I have my favorites — will decide they absolutely must add my collapsible snowshoes to their line.” I suggest a company could jump to the forefront of her favorites by aiding the funding she seeks. 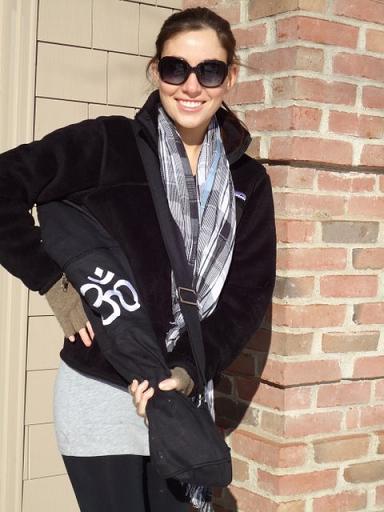 Deb’s comments sound very much like an opening for a similarly creative and forward thinking snowshoe company to step in and share this breakthrough for the sport. Whether or not they will become a revolution as Deb thinks, it is likely snowshoe veterans and newbies to the sport will match what she has heard thus far from those who have trekked them over snow. “All claimed these were exactly what they needed and wondered where they could get them. The simple ability to tie a pair of snowshoes onto or into a backpack with little extra bulk can be useful for so many potential users, even those who already have and use higher performance snowshoes. I am even convinced people in northern climes should keep a pair or two of SnowXu snowshoes in their trunk as well as keeping them at any camp, cottage, or cabin they occasionally visit in winter.”

Deb’s enthusiasm carries to the point where everyone who has a television with snow on the screen needs a pair, too. However, that attitude is what makes America great: the infectious delight of creating something previously unheard of. Having a real product appear magically where once it was just a drawing, the one introduced to you now in Snowshoe Magazine, is a giant leap forward revealed in this story. For those who have participated in such of an endeavor no matter the industry, the feeling of creative accomplishment is sublime.

Pricing is uncertain, but just to sling one of those snazzy carrying bags down and surprise onlookers when you open it, and out pops a snowshoe not looking like a snowshoe in its folded state, will make it all worthwhile.

Creating and imagining as Deb has done fits right in to Phillip’s just introduced book: HARMONIZING: Keys to Living in the Song of Life – Visit www.iHarmonizing.com.