Bridget Colvin, who was profiled earlier in the season by Snowshoe Magazine, made a spectacular showing at the Special Olympics World Winter Games last month in Boise, Idaho. Bridget returned to her home in Burnaby, British Columbia sporting medals from all three snowshoe events she competed in. Held every four years, the Special Olympics World Winter Games offer an opportunity for athletes with intellectual disabilities to showcase their skills and indomitable spirits in a variety of winter sports. Bridget earned the first gold medal for Team Canada’s snowshoers for her best event, the 200 metre snowshoe race, and followed up with a silver in the 400 metre and a bronze in the 4 x 400 relay.

This year’s World Games attracted more than 250 snowshoers from 47 countries, highlighting the intense competition faced by Bridget. According to The Idaho Statesman, participation in snowshoe events doubled from the last Winter Games in 2005, partially because of innovative training techniques used by athletes and coaches from warm-weather countries like El Salvador, Libya, and Sudan. These athletes completed all of their training on beach sand, successfully transferring these skills to the snow when they arrived in Boise. Perhaps no-one is better equipped than Special Olympics athletes to break down barriers and figure out ways to make things work. 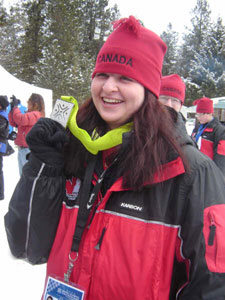 Team Canada Head Snowshoe Coach Joanne Zahaiko is quick to praise Bridget’s training commitment, sportsmanship and performance in Boise. “Bridget took her training very seriously. She set many personal goals and as she began to achieve them, she would reset her goals to push herself further and harder. Bridget was able to gain a great deal of independence in her training, which tells me that she was internally driven, not just doing this because her coach told her to!” Bridget’s hard work and commitment clearly paid off at the Games. In Joanne’s words, “Bridget competed at these World Games with confidence and poise. She remained focused on race days, supported her teammates when needed, and had a great time when the racing was done for the day. Bridget deserves every one of the three medals she won as she is truly a hero.”

I spoke with Bridget a week after the Games, as she savoured her moments on the podium. Despite her high level of athletic achievement, Bridget manages to keep things in perspective. One of her best memories of the World Games is the happiness she felt when her competitors joined her on the podium to raise their arms together in victory. A sense of friendship and sportsmanship is overriding at all Special Olympics events, and Bridget embraces this focus wholeheartedly.

What’s next for Bridget Colvin? Well, she was back on Cypress Mountain practising with her snowshoes a mere week after coming home from the Games, and says she is looking forward to playing softball this spring. Bridget, congratulations from everyone at Snowshoe Magazine for a job well done! 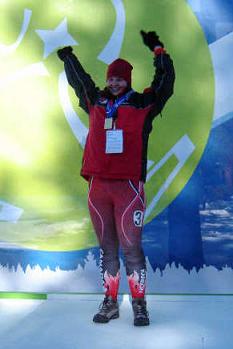