Like many, the last few months have been full, very full, with business related activity and challenges. Many hours, many days . . . more than a few headaches.  As Ben Stein, famous author, actor, and media voice explained, though, “you don’t have a problem if it can be solved with money.”

Apollo 13 . . . “Houston, we have a problem” . . . couldn’t be fixed with money. If a check were written for $1,000,000,000 on that day, from that message, the problem would not have been solved; the crisis would have remained. It took effort, ingenuity, prayer and old fashion American smarts to bring that capsule and its crew home safely. My problem with a new prickly pear (what’s a prickly pear? Go to
http://www.snowshoemagazine.com/view_content.cfm?content_id=308 )
solved of recent date, had left a sticker still dangling in me, penetrating flesh, causing irritation, trouble, perhaps effecting a diminishment in an important area in my life. It had begun to swell, metaphorically, and was painful. Money wasn’t going to solve it; time on the trail would, though. Fortunately, Mother Nature cooperated by providing a surprise white landscape on this early Sunday morning so my trail run morphed to a rewarding, pleasant snowshoe trek.

But it wasn’t so easy getting there. 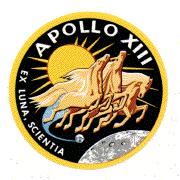 First, I used the powers and suggestions documented in
“The 90% Rule for Early Morning Snowshoeing”  (http://www.snowshoemagazine.com/view_content.cfm?content_id=353) to get out of the house on this cold morning . . . bitter only because we are still early in winter, and I’m still acclimating. Aren’t you?

These temps will seem warm by the time Spring rolls around. My mind, upon waking, was not thinking at all of the benefits and mental cooling of spending valuable hours covering distance on snow. Rather, it was providing a good, thick Stephen King book full of excuses to stay right where I was, sleep a little longer, “why, you deserve it,”  blah-blah-blah.

Second, hopping out of bed, I overdressed as I suggested in “7 Tips for Acclimating” (http://www.snowshoemagazine.com/view_content.cfm?content_id=425) so some of my clever excuses for not getting in the car and getting to my trail were overcome.

I like all seasons and can find the advantage of each once the calendar and weather makes the choice easy for me.  The fact that daylight hours are shrinking and darkness will last later today due to the cloud clover left over from the light snowfall is right down my alley. Sporting my headlight, hand light (I use three big rubber bands to hold the narrow Fenix light to the back of my glove so I don’t have to grip it. Try it), plenty of clothing and headgear, I should be able to do my entire jaunt, or nearly so, in darkness.

Overdressing works just right for about a quarter of a mile down the trail when stopping to strip layers off becomes the order of the moment as, suddenly, I’m hot.

Settling into my early trail routine, the plan is to take it easy this morning.  Just getting into snowshoeing again for this season, no one needs to go out like this is the USSSA National Championship. There’s plenty of time for that.

It doesn’t take long before the mind is drifting into relaxed thought where I contemplate all sorts of topics, going back and forth over each as I climb, turn, and scamper down hills utilizing the slight snow on the ground. Plenty of leaves in the woods so, even without a deep accumulation, the pack is soft to travel. Open hilltops, once I journey through, are denuded of snow, so on the second loop I move over a little, creating a new lane, finding snow to track.

While still in the predawn dark I appreciate how light it is even with none of the Gibbous moon shining through the clouds; no more of the deep darkness that would generally accompany a morning trail event in the other three seasons. I had forgotten how much the woods change when coated, albeit lightly thus far, with white. I probably could have made it just as well without using lighting — it wasn’t required.  But on this session the choice to keep the two clicked on, leading me along the way, providing an allegorical enlightening just ahead, was comforting. It seemed like having Tinker Bell as a companion.

Today begins training for a snowshoe event which will be highlighted in an upcoming edition of Snowshoe Magazine. It requires hoisting a backpack weighing 15 pounds during the race. What I discovered, carrying 15 pounds sounds much lighter than it really is, once strapped on the back. Practicing by carrying weight is the same as practicing to adapt to cold temperatures — one has to get used to it. As that new weight on the back began to feel, well . . . a little more normal . . . the mind was free to begin offering clues and suggestions to my thorny prickly pear challenge. 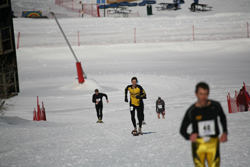 It occurred to me, for the first time, the thorn from the leftover prickly pear may have done me a favor. The action creating the distress actually freed up some valuable time and lowered my obligation overload. Negatives from the prickly pears in our lives can become positives if contemplated in the right ambiance.

Once I saw the challenge in fresh light, brought on by the wonderful benefits of snowshoe exercise and the freshness of the woods, creativity began to flourish. New ideas flowed through my consciousness. As snowshoes quietly made way through hill and dale, steps and paths, the thorn had been a peg holding back ideas that, once removed, were allowed to rush forward like a Rocky Mountain avalanche.

Negative influences, negative judgments, in fact all dead-end thinking dims creativity, shrinking it like a prune.

So now a whole new season of snowshoeing is launched and already has paid a reward more valuable than money — and strengthened the body at the same time. Clouds pass, the moon shines the white landscape, the future looms seductively  . . . all happening in the predawn night.