Gordon Lightfoot sang in his mournful song, “The Wreck of the Edmund Fitzgerald,”  ‘when the gales of November come early’ and ‘with the gales of November remembered.’ This song, full of masterful poetry and imagery, recounts the sad sinking of that vessel and the loss of its crew that occurred on Lake Superior, November 10, 1975. It is considered the best ‘story song’ ever by recounting the storm and the ultimate tragedy.

It is impossible, living in the Great Lakes Region and specifically Lake Superior, not to think of those gales when the fall of the year transposes to winter. Annually several big blows are likely in late October through November, reminding one that change is underfoot. Leaves fall, flurries flutter, and suddenly winter is upon us.

So the forecast on this late October weekend was for heavy winds with gusts exceeding 50 mph, rain and snow mixed, with all snow falling further North of the Twin Cities metro. Perfect conditions to get out on the trail and work on acclimatizing.

These gales foretell good news for snowshoe enthusiasts because this is the annual transition that takes us from hot to cold, rain to snow, trail running to snowshoeing on trails. For this we can exclaim one word: “Yea!”

The first time out in these conditions can be a shock to the system . . . where 35 degrees seems cold yet one realizes in a few months the same temperature will seem hot when snowshoeing. What gives?

Well, the human organism undergoes a change referred to as acclimating to conditions, or Homeostasis. Personally I have found whether the cyclic change from cold to hot or hot to cold, the hardest one is the very next season I have to adapt to. In this region we get to celebrate the extremes of all four seasons, so one is going to be forced to adjust. Once used to heat of summer, it is effort to prep the body for the winter. Equally tough is changing next spring for the heat of summer . . . we’ll worry about that when the snow melts. 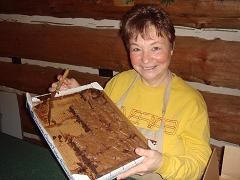 What are some of the methods one can use to enhance this process and get it done so that we snowshoers are ready to rock-n-roll when the snow season hits its main stride? Those were exactly my ponderings while covering trail in the dark on an early Sunday morning at a local conservatory on the cliffs and peaks overlooking the Minnesota River Valley     . . . all while Mr. Wind swooshed through the woods at a howling rate. And temperatures plummeted.

The most important first step to acclimating oneself, believe it or not, is getting out of bed and going out in these cold blasts to experience them firsthand. One’s mind can play real havoc here. In my case the cold wind outside the warm confines of  home was stirring big time, swaying huge Oaks,  beckoning me to rollover and start this another day. Fortunately I utilized some of the guidelines I wrote of last season about how to get out of bed early and on the trail. They worked. Check out my article in the Features section of Snowshoe Magazine titled The 90% Rule for Early Morning Snowshoeing.

So, Tip #1 is:
Get going and experience the changing conditions. Stepping outside to grab the morning newspaper does not count. I am talking about exercising for some period of time, probably more than an hour or two, adapting to the new conditions. This is the start, the hardest part, that initial surge to adapt to cold. From this comes the success you know will redeem itself, next spring sometime, where you will start adapting to heat. That will be then; this is now.

Tip #2:
It is okay to overdress for these first times out when cold has arrived. This works for multiple reasons; the first is the mental thing where the natural instinct is to stay out of this weather, there’s plenty of time later, blah – blah – blah. If you have to drive to your favorite trail or course as I do, there is nothing that will keep you in the car once you arrive more than facing that initial blast when you are not used to it. Let’s see . . . I can sit in the driver’s seat with a nice heater blowing away, or I can open the door and get hit by cold (relative to my heat adaptation). The knowledge that I have worn plenty of clothes, that I won’t be cold initially, is the key to unlocking the car door and greeting the day, taking that first gust of cold air smack in the face.

Tip #3
You are going to get warm very quickly when you start moving so wear layers that can be easily zippered open or off. Have head gear that is easy to remove because much of the heat you generate will dissipate quickly when you expose the old noggin. In early cold temperatures, start off with heavier gloves as the fingers will get cold quickly if you don’t; change to lighter gloves you’ve carried along as needed.

Tip #4
Since many regions experience initial cold fronts mixed with big winds, choose an area to start acclimatizing that has plenty of protection from the wind, with trails on the lee side of hills and plenty of tree growth to block winds from you. My conservatory trails fill this prescription beautifully. The small amount of time I ran, exposed directly into the Northwest wind, was manageable and in a way further helped me in the adaption process.

Tip #5
If you have a pre-workout drink like I use, don’t add water the night before and chill it in the refrigerator. Instead, add the water before going out the door so the drink will be cool but not cold. If it is in a can or other container, consider leaving it outside refrigeration but in a cool place, maybe in the garage. Slurping down 16-20 ounces of an ice cold drink can chill one, so moderate the effect by this step. This particularly works as it gets colder because, even wrapped up nice and warm, when the thermometer falls out the bottom around, say, negative 20, one can find all sorts of reasons to stay in the car and pump the heater button – don’t add to it by chilling yourself with an icy beverage. I don’t drink anything warm, either, like coffee before heading out; stick with a cool drink. Drink hot chocolate afterward as a recovery beverage. Since you’ve burned all those calories, go ahead, float a few marshmallows on top. 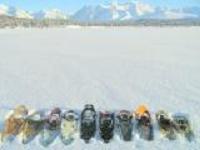 Tip #6
Be dressed before you get to the site. Have gloves next to you, have your head gear ready. On this day I wore a headband for the purpose of covering the ears, great radiators of one’s body heat.  Flashlights have been tested before you ever left home so you can click them on without having to fret about for new batteries (What? I’m out of batteries? The flashlight doesn’t work . . , darn it, I’ll just have to drive back and crawl in that warm, comfortable bed). Be organized so you are not spending ten minutes opening doors to find what you need to get going. The trick is, once arriving and parking, step out and take off. Now.

Tip #7
Remember this fact: “Humans can acclimate to extreme conditions through changes in normal physiological processes,” says Wikipedia. What we want to do is accelerate that process so as winter athletes we are ready, prepared to go, when the first real accumulation arrives. Not only are you adjusting to the cold, but simultaneously the reduction in day light, too . . . another acclimation you annually get to experience.

The idea that I raced in just a sleeveless shirt, long pants and gloves while perspiring and hot in colder air last season than this first foray into winter (see picture), seems a long way in the past at the moment. I know by getting out and experiencing the change of conditions, embracing the seasonal advantages like not having any bugs or mosquitoes, the acclimatization will naturally occur. The more I’m out, the faster it will come. Then, before I know it, I’ll be cranking the heater up in the car next spring to help acclimate for summer.