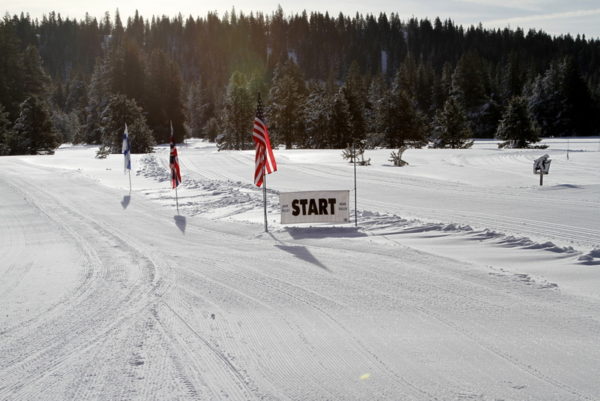 With the race-start back at the meadow, Paul Peterson, owner of BVXC, set a well-marked, fun course. Banners waved in place along with festive flags saluting the race start. The day opened with beautiful sunny skies and the air temperature around 35 degrees at this 7,200 feet elevation. 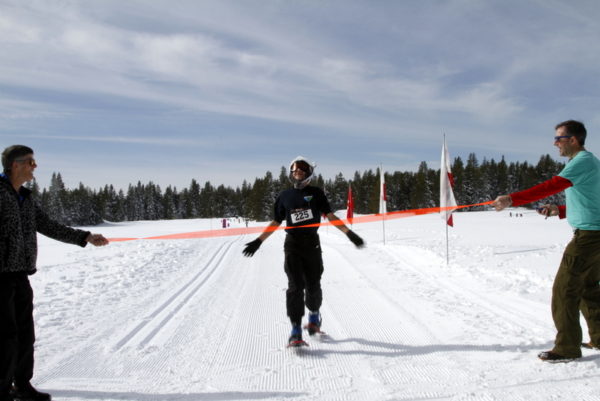 Racers were greeted and registered for the race by members of the NCA JAZZ, a musical group from North Creek Academy, Walnut Creek, California. The kids worked hard, with the help of their parents, to get the race started on time. Twelve of the musicians even took on the One Mile race as well. 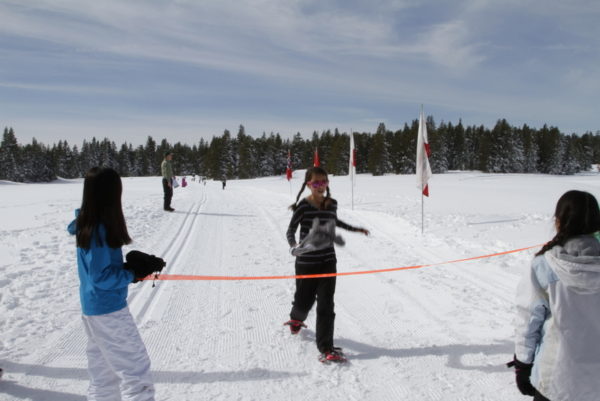 The 5 km and 10 km start launched with 51 racers, the largest showing for these races.  The One Mile event started five minutes later with a record 33 racers. Race director Patty Jo Struve said, “I was excited to see so many younger kids take part in the One Mile challenge.” That race had several adults running as well so ages ranged from 3 to 78. 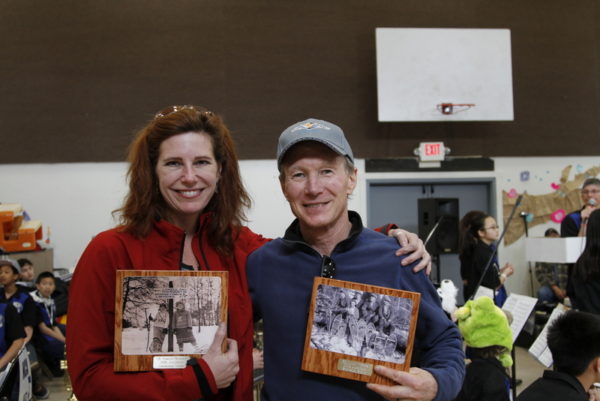 Many of the 10 km racers were returnees; new competitors were welcomed from the bay area as well. Kudos to the snowshoers who traveled from Club Sport in Pleasanton, a big showing by this new group. Many of them were first time snowshoe racers, and they had a great time. 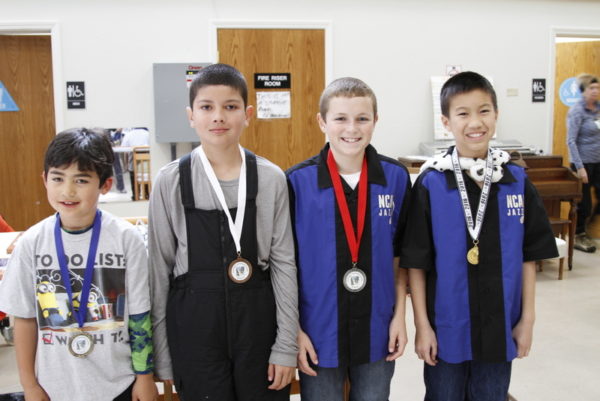 NCA student, Will Sauter, won the one mile race, having a big lead over runner-up, James Walker, also from NCA. Student Natalie Neypes took the overall girl win on the heels of the boys. The best part of the one mile was seeing the four youngest girls run in with dad having dual roles as babysitter/runner, as the youngsters were ages three and five. “These folk know how to start ‘em young,” noted Struve. 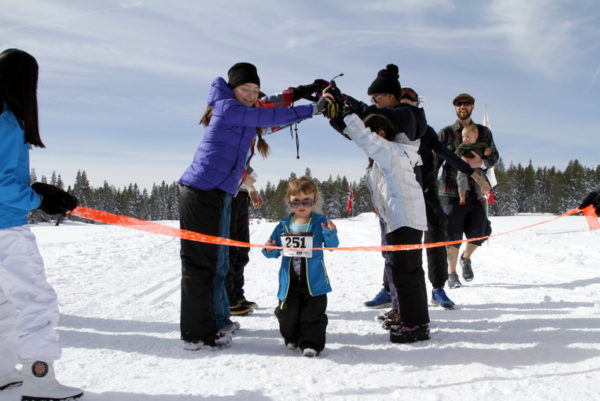 The first 5 km snowshoer was returning winner, Jim Burton, a long time local of the community.  He had a quick time; close behind him was Jim Dixon.  Michele Maley took the women’s crown for the 5 km. “She was excited to finally take the gold in this race.” 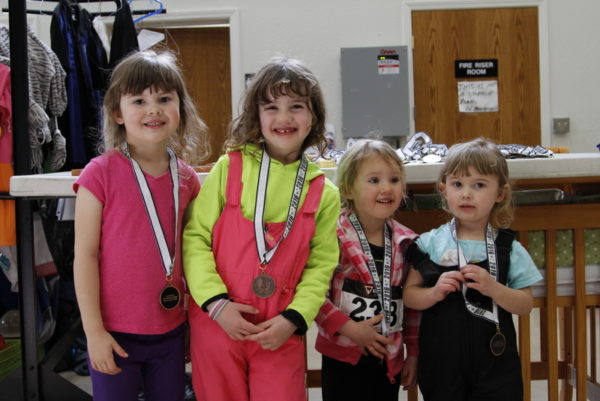 Kayleen Clemens from the community took second overall, with a win in her age group. Also, noted finisher Carol Pechler living in the bay area, 75. Pechler looked amazing at the finish and was really pleased with the race. Later she emailed Struve, “Telling me how she went home and told all her friends to come next year as she had so much fun.” The other noted racer in this event was 71-year-old, Michael Erickson, a veteran of this course finishing strong in the 5 km. 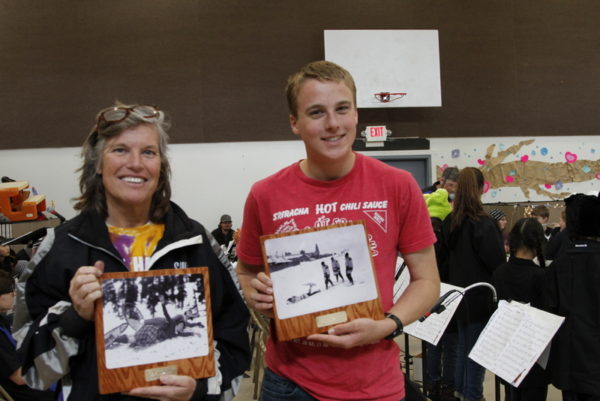 Returning athlete from the San José area, Joseph Raneti, won the 10 km with a fast time of 1:02:19.  He is a young runner [16] and a threat in the men’s class. The 10 km saw talented newcomers this year like Rene Sepulueda, a national snowshoe athlete, taking second place behind Raneti. 50-year-old Rene took the 50-59 age group win. 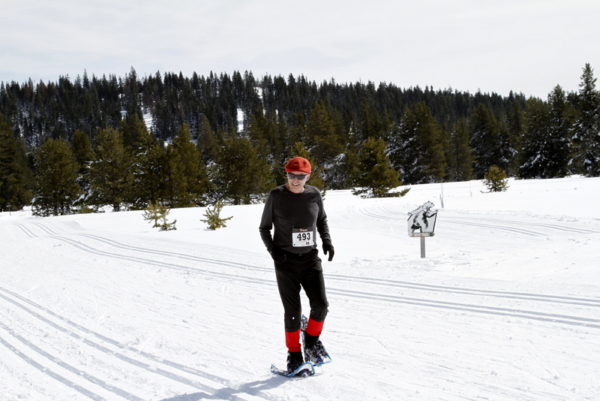 Not far behind raced 55-year-old, first place woman, Vicky Johnson.  A  long time competitor in this event commented after the race, “I had to work hard for this one, those girls behind me are fast!”  She has never won the 10 km, but has been the 5 km victor in the past. Struve said, “This was very exciting for her.” Johnson also hosted the 25 junior high musicians (NCA JAZZ) who stayed at Tamarack Lodge, near the event.

Another amazing finish by our most-senior competitor [“And my hero,” said Struve] was Jim Kauffold, age 78. He headed to the USSSA National Championships a week later. 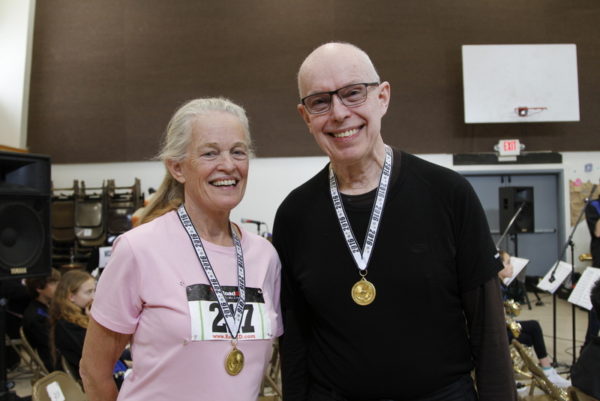 Racers discovered treats along with a deluxe lunch made by “an awesome friend of the race, Paula Gonzalez.” Struve continued, “She puts out a great meal for all, and we love her.”

The awards party–“And it is a party”–plays a special role at Jazz Trax. Struve noted, “I am passionate about the sport of snowshoeing and teaching music. It is always a good day when I can combine the two best parts of my life into one happy day for all. NCA JAZZ played great music at the party while listeners ate delicious food, received their awards and won raffle prizes.”  Everyone went home a winner!

Note these behind-the-scenes people and businesses who helped make this event the best yet: 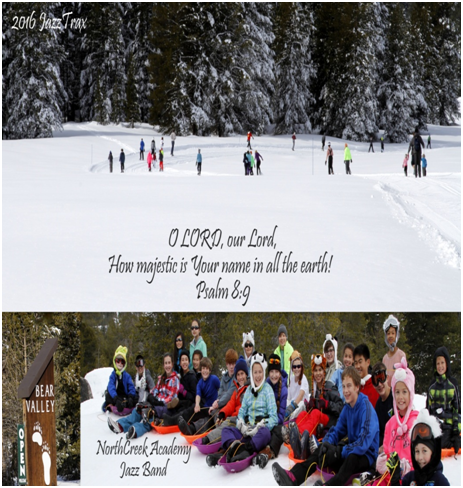