“All of a sudden, this big crack appearing in the snow . . . ” an avalanche forming directly in front of him, introducing in a forceful way to adventure snowshoer Andrew Nugara the imminent and clear danger at hand. Noteworthy, the avalanche conditions that day . . . “We checked, and they were favorable.” So no problems expected, but the mountains didn’t get the email. Surviving, he and his brother Mark experienced what can only be guessed by the rest of us: ” . . . how powerful they could be. The best thing to do is stay out of them” when conditions warrant, but  one remains alert no matter what. 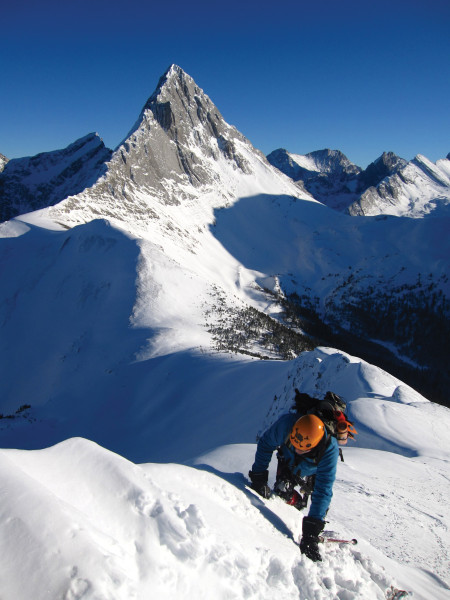 The reward for the journey . . . check out this view.

In the must-have book “Snowshoeing in the Canadian Rockies,” Nugara lays out for all snowshoers, regardless of skills in avalanche-prone destinations, critically important information to incorporate in one’s training. He writes, “Of course, the ‘anyone can snowshoe’ rule does not apply to the extreme end of snowshoeing called snowshoe mountaineering. The technical demands of this activity need formal training.” Yes, training. Strap ’em on and go, a joy of snowshoeing, just graduated with a more advanced degree if you consider venturing into the beauty of high mountains covered with frozen flakes. Or ascending to the stars where the book uses a title “To boldly go where no man has gone before.” 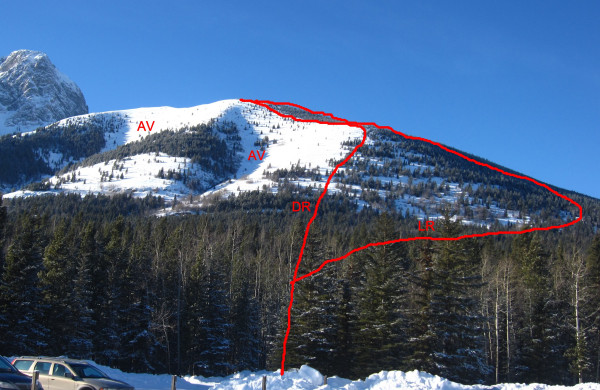 With “only one harrowing experience” with avalanches–none being the best number–Nugara noted it “took us down about 15 meters. Neither of us could do anything except ride the slide down. Fortunately it stopped within ten seconds. My brother Mark picked himself out of the debris, made sure I was okay, and then we both descended, using the rocky slope on the side of the avalanche slope. We turned around and went home.” The pages devoted to avalanches, which Nugara flatly rates as “the most important section of this book,” offer more reading, references and classroom courses one can avail themselves to along with ways to gain “hands-on experience.” Only somewhat tongue-in-cheek, he advises all four are necessities, however, hopefully for everyone, the first three will precede the latter. 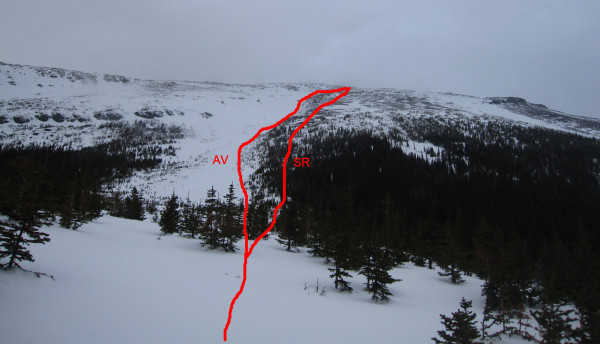 From the base of the avalanche slope, one takes the SR [Safer Route] through the woods to reach “a phenomenal summit view.”

Nugara lists several avalanche training sites in his backyard of Calgary, Banff, and Canmore along with northern neighbor Edmonton. The American Institute for Avalanche Research and Education [AIARE] provides a plethora of dates for training at mostly United States locations led by Colorado, Wyoming, Washington, New Hampshire, Utah, Oregon and California.  The Avalanche Academy conducts classes in the European Alps where they state, “The adventure . . . is what we all dream of but avalanche is our worst nightmare.”

Nugara lists four types of back-country avalanches followed by commentary on how to recognize them: Slab, loose snow, cornice collapse and ice. Details on each offer compelling content in the book. Slab avalanches win the “Danger Zone” title as Kenny Loggins sings, “because of their frequency not necessarily their destructive force.” Nugara covers the important particulars of these disasters like identifying the most important key to forecasting an avalanche. 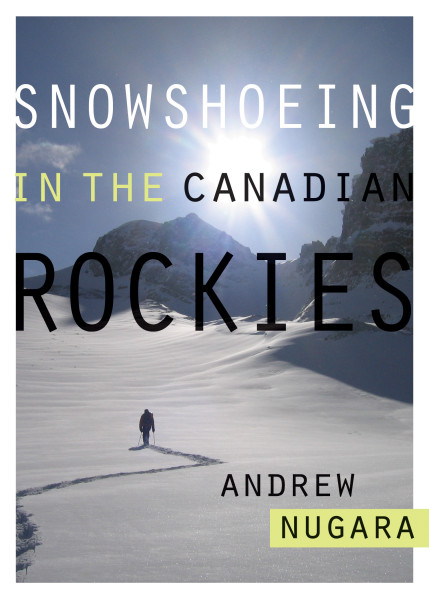 The publisher, Rocky Mountain Books, specializes in the genre. “Founded in 1979 by passionate and renowned mountaineers Tony and Gillean Daffern, RMB has grown to become one of Canada’s more vibrant, long-standing and evolving book publishers.”

His chart [pg 37]  provides a numeric methodology in which one can check avalanche hazards [predicted by the avalanche center] against danger, which rates the terrain. This table created by Frank Baumann allows one to estimate a risk value where low, moderate or high faces a snowshoer. Baumann’s Bivouac website offers an enormous database for more than 30,000 mountains, thousands of backroads, photos, trails and trip reports; call it the Canadian Mountain Encyclopedia.

Ultimately after gathering the odds, “It’s up to you to decide . . . .” Like the teacher Nugara is [music and physics], caution remains abundant. “. . . These are general guidelines and should never be a substitute for . . . good judgment.” 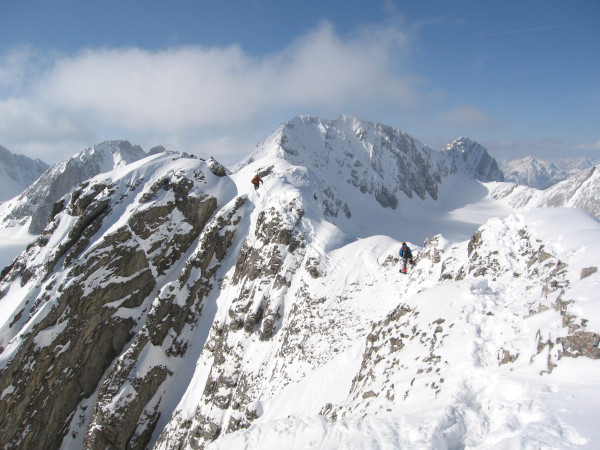 Gotta get up high for vistas not found trekking at the local park . . . .

Whether you snowshoe in avalanche zones or not, information about potential problems along with methods to fortify your defenses seem important in a number of other geographies, such as possibly falling in or becoming trapped by deep snow. Nugara suggests if one finds trouble since “a lot of unpredictable things like weather suddenly creating havoc, batteries that fail meaning GPS fails, along with other pretty frightening situations, go through a thought process where you can’t panic, keeping calm, doing one thing at a time, focusing on the task right at hand.” A way of interpreting that advice, don’t get too far ahead of yourself in a self-rescue. Like in the hilarious golf movie, Caddyshack, “Be the ball.”

Andrew W Nugara must be nearing a thousand ascents!

Be aware in the Rockies with prevailing winds west to east, the leeward slopes are notorious for danger. He writes, slopes “that are gentle on the west, then blow snow over the mountain top (become) loaded” on its lee-side. Over time the pack layers itself to dangerous levels like stacking a cake, finally resolving its inherent instability through avalanches.

Use his suggested treks to find your comfort level in the difficulty level and risk mix you want to tackle. For example, Nugara explains the Kananaskis area, just West of Calgary, offers official snowshoe trails, a rarity in the Rockies. Perhaps that meets your need while experiencing snowshoe trekking the first times. No matter the trip selected, 61 by my count, the book provides difficulty levels, hazard ratings, mountain height, elevation gain, round-trip distance, estimated time [the times invariably are longer than one thinks], extra equipment needs like avalanche gear, a map notation along with the site identification such as  Ruby Ridge’s Gem Trek Waterton Lakes National Park. Furthermore, Appendix D lists 27 more trips; beware Mount Fairview with a “serious avalanche danger.”

Appendix B covers snowshoeing frozen creeks and lakes while gaining experience. Appendix C organizes the treks by the seriousness of the difficulty where Nugara writes, “Note that the majority of trips in this guidebook are classified as intermediate and do require avalanche gear.” Then consider Appendix A: snowshoe ascents on the Wapta Icefield. Enjoy his delight in revealing “huts in the area, specifically Bow Hut, provide perfectly situated bases where you can hang out for a couple of days while bagging peaks.” Unsaid, is there Direct TV available?

Even if you never plan to travel on his favorite routes, the take-away from the book means one now possesses tools to develop similar data for any area you want to snowshoe. One needs to develop this same list before venturing out in new territory. 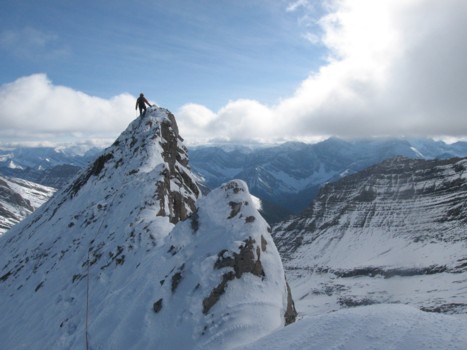 Examine his photos accompanying these routes. Each black-and-white photo of the slope or mountain shows a route layout traced in red either earning an AV [avalanche slope] or SR [safer route] stamp. Glancing through them, one starts to get a feel for what might be the better route, which generalized means safer but more difficult. Many photos have other features one needs to recognize or know. The scariest photo in my eyes [pg 153] shows a huge cornice overhanging a high ledge. Peering at it, one suddenly discovers a hidden phobia, acrophobia, the fear of heights, or worse aeroacrophobia, fearing scary open high places, imagining the snow just might break off in one more step leaving you in a world of trouble. [Unrelated, but interesting: did you know only two letters of the alphabet, Q and Y, have no listings for phobias? If you ever uncover any for them, email the definition to me or comment below.]

Another Nugara tip to consider: “When travelling outdoors in the cold months, you can never take too much extra clothing with you . . . A balaclava or equivalent is also essential to have . . . (allowing) me to survive should I be forced to bivy overnight” or if temperatures suddenly plunge. The book includes information one needs before engaging in a thrilling trek into the high Rockies or any other treacherous mountain range.

Plan on plenty of blunt talk. It will help keep you safe such as this caution for Mount Haffner in the Kootenay National Park: “Wait until late winter or early spring to make an attempt, unless seven hours of knee-deep post-holing is your thing!” Or, when looking up at the mountains, “The ascent slopes are deceptively long.”

A view to take your breath away; you, too, can be there either in person or with Andrew Nugara through his book.

Add an ice axe to your gear along with carrying crampons, too. Poles become commonplace. Learn a new snowshoe maneuver, kick-stepping, a vital aid in descending steep slopes, the norm when returning from those vista views others never, ever see. Nugara’s clear and concise writing, along with color photos and topographic maps, allows one to grasp the ideas needed to make those summits with relative ease and safety. Hard work in many cases, but what’s wrong with that, particularly when the rewards earned and memories gained last forever.

Pick up new words for your vocabulary like “whumphing,” the sound an avalanche makes as it begins. Don’t ignore its call, just hope and prepare so you never hear it. Like all rules and exceptions, not all avalanches announce their intention.

The world of snowshoeing unknowingly changed in 1979: Andrew Nugara landed in Calgary, Alberta, from England. Later, lifting his eyes after completing formal education, he discovered another passion; ever the pioneer, his own Canadian Rockies. Perhaps unbeknownst at the time, he began a life journey to educate snowshoers to the beauty, thrills and real danger in trekking those high mountain peaks. He writes, “There is absolutely no place I’d rather be on a crisp, cold and clear January day than in the Rockies, surrounded by mountains and snow, a deep blue sky above and the sun illuminating the landscape in unequalled brilliance.” If you can’t make it to those peaks, enjoy it through his eyes and experience.

Join Andrew Nugara with any of his titles, but most of all put a copy of “Snowshoeing the Canadian Rockies” on your “Best Of” bookshelf.