About half of all snowshoers are women, who snowshoe to experience nature, to exercise with friends and family, for backcountry access, and to have outdoor fun throughout the winter. The various snowshoe companies have been catering to this market by offering a broad selection of women’s-specific snowshoe technologies recreation and fitness, but do the women’s snowshoes go beyond just a change in cosmetics?

Tubbs Snowshoes pioneered the development of women’s-specific snowshoes by offering patented binding technologies that custom fit women’s boot sizes and by ergonomically engineering frames that are tapered at the tip and tail to accommodate women’s shorter strides. The result was lightweight, comfortable, high-performance snowshoes and many of the other brands have followed suit.

There are a few differences between Tubbs’ men’s and women’s snowshoes. On average, women have a narrower stance and shorter gait, so women’s snowshoes are narrower in width. Women’s average weight range is both more light weight and a smaller range than men’s, so they provide snowshoes in a shorter size for women, longer for men. The Tubbs men’s and women’s bindings differ, providing the optimal fit for the average women’s boot size and volume range, versus a larger average men’s boot size and volume range. Foot size also affects the optimal position for the heel lift, so the placement of the heel lift on men’s snowshoes varies from the placement on women’s snowshoes.

Atlas Snowshoe Company conducted gait studies and biomechanics research to create snowshoes that enable women to hike and run with the most natural stride possible, while making the snowshoes both comfortable and lightweight. The research revealed that women have a greater Q-angle (at the knee where the thigh bone angles in from a woman’s wider hips) and abducted gait that create specific issues when snowshoeing. Women also tend to pronate (collapsing arches) pointing to the need for bindings to support the arch of the foot. 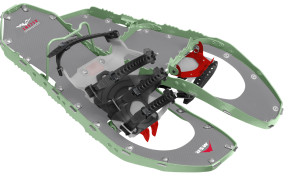 According to the people at MSR, the studies conducted by Tubbs clearly showed male/female anatomical differences. However, when these differences are translated into physical products the design changes are not as noticeable. For example, women generally walk with a narrower gait than men.  Therefore, a very narrow snowshoe would suit women better, but the snowshoe width has a direct impact on flotation so the final design can’t be too narrow. The ideal width snowshoe for women is a balance between very narrow to accommodate gait and wider for adequate flotation.

MSR believes that it is important to look beyond the measurements and understand how the snowshoes feel. Thousands of hours of field testing showed that subtle differences are noticeable. The major male/female differences with men’s and women’s versions of MSR are with decks and bindings.  The women’s deck shape is optimized for snowshoe performance (traction & flotation) and a female gait. The bindings are sized to meet the proportions of a women’s footwear. There is also specific MSR technology such as Axis™ Gait Technology (Women’s Lightning Ascent Snowshoes), which allows women to compensate for varying degrees of toe-out or toe-in. This technology provides laterally adjusting the bindings independently of the frame, ensuring efficient, parallel-tracking snowshoes regardless of a women’s natural toe-out or toe-in stance. This means that the binding itself can swivel on the snowshoe to adjust for varying degrees of natural toe direction allowing binding alignment with your natural stance rather than forcing you to point your feet directly ahead.

Yukon Charlies Snowshoes has the YC Pro II Series women’s snowshoes, which are designed with features specific to the needs of the female snowshoe enthusiast. The rockered V shape tail enhances performance and allows for a more natural stride. These snowshoes are lighter, stronger and more reactive than any of the company’s other women’s snowshoes.

Yukon Charlies’s Advanced Series for women is a feature-packed “go anywhere” snowshoe is designed by women, for women. The rocker V tail allows for a natural stride from a walk to an aerobic sprint, while the integrated heel lift and the axle system makes Yukon Charlie tout them as their best women’s snowshoe ever.

Redfeather Snowshoes has three styles of Hike snowshoes with the SV2 pull handle binding. There’s also a choice to get the snowshoes in a kit with poles and a bag. The Redfeather Hike has sizes of 22, 25, 30 (inches) for women up to 150, 175, and 200 lbs. 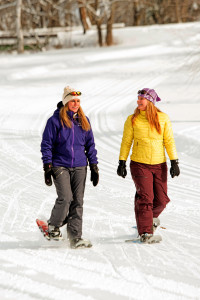 Atlas Snowshoes has six options for women including the Electra 8 and 9, Endeavor, Fitness, Race, and Run.

Few of the snowshoe companies invest in marketing directly to women but the Tubbs Snowshoe event “Romp to Stomp Out Breast Cancer” Series, is very popular focused on women. This year’s event at Frisco Nordic Center in Colorado was attended by more than a thousand people! The series, which has been hosted at sites across North America has raised funds and awareness since 2003 bringing in more than $2,8 million for the fight for a cancer cure.

Whether the trail conditions are light fresh snow, crust, slush or ice, women want to trust their snowshoes for all-condition durability, excellent traction, flex for control, and comfort. Women are coming to expect that their snowshoes are specific to their needs and built to withstand frequent use offering many seasons of recreation, fitness and adventure.