Despite a wind chill that sent the temperature plummeting to -35, the annual Gatineau Loppet – a ski and snowshoe event – drew more than 2,300 participants over this past Valentine’s Day weekend.

Still in its infancy, the snowshoe race component of the weekend continues to grow in popularity, attracting competitive racers from all around the province, as well as people just interested in the run of the sport. 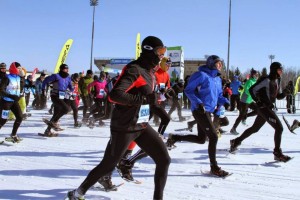 Event president Yan Michaud said the Saturday events (ski-based) all went well but by Sunday the extreme cold forced organizers to shorten ski race courses (the 51km became a 42km, the 27 km became a 22.5, the 10km became an 8.5km and the mini-sport 2km became a 1km).

“Many skiers abandoned courses early but we were prepared for the possibility and had shuttles to bring people back, more first aid people throughout the course and extra volunteers on hand watching for signs of frostbite.” 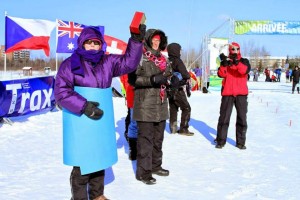 Despite the winds though, and as many snowshoers will know, the snowshoe races went off without a hitch. Michaud says more than 70 participants had registered for the races and every one showed up, perhaps expecting the tree cover would, as it did, act as a buffer.

Michaud says the Loppet is part of a 10-race series but that this only accounted for about 30 per cent of the racers. The rest he says came out just for the love of the sport. Racers also included three Special Olympics athletes. 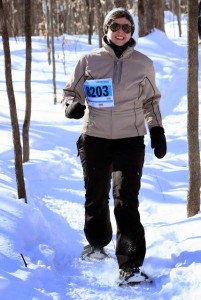 The snowshoe component of the Loppet actually evolved out of an idea from Michaud. “I participate in Iron Man competitions, started running in snowshoes and realized it was both hard and fun.”

With snowshoe trails just 200 m from the ski trails, it seemed a natural fit. Getting the event included however would not be quite so natural. First, Michaud had to get the race committee on board and then he had to get approval from the National Capital Commission (NCC) who owns the land. 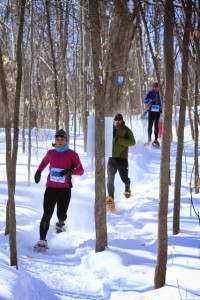 The combined event has been a hit since the start. “The snowshoe trails here are wonderful and people love coming out to take part.” The Gatineau Hills are a breathtaking venue to begin with and Michaud says the course, combining a mix of flats, ups and downs, and corners, was spectacular.

Racers can take part in a 2.5km, 5km or 10km race. Competitors are required to wear snowshoes with greater than or equal to 18 centimeters wide (7 inches) by 51 centimeters long (20 inches) snowshoe. A limited number of pairs were available to borrow courtesy of sponsor Atlas Snowshoes. 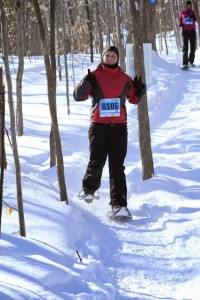 The Gatineau trails have been the source of local news stories in recent years. While the trails used to be free to use, the NCC has since begun charging snowshoers to use the park. Michaud says this has not dampened enthusiasm for the sport and in fact, has provided benefits. “The trails used to be ‘official’ but weren’t widely used. Now the NCC has added more and better trail markers and markers to keep people off the ski trails and the sport has picked up quite a bit.”

Adding that the sport is still developing, he says he is encouraged to see a mix of young and old, people running, others using poles… The sheer numbers he says now, is amazing. 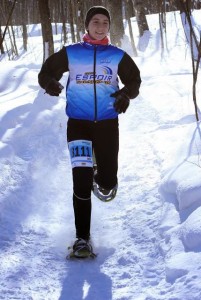 While the race is just a few weeks past, Michaud says he has already set his sights on next year. He plans to add new sponsors and to promote the event earlier with signage along the new trails to attract people who may not be regular racers but are active snowshoers.

“Snowshoeing is something everyone should try. It gets you outdoors, gets your heart pumping…. there is nothing like it for winter sport.”

The Loppet was originally established in 1979 under the name Rivière Rouge and took place in Quebec’s Lachute region. Unable to support its growing size, in 1982 it moved to Gatineau Park and renamed the Gatineau 55. In 1996 it became the Keskinada Loppet and in 2008, heralding its position as the “biggest cross-country ski celebration on Canadian soil” it became the Gatineau Loppet. 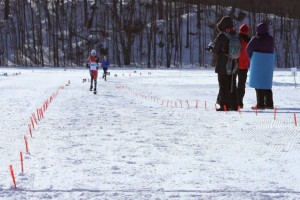