When not winning the overall, Jeb Stone won second; now for the third year running, Jeb Stone takes number one again in an even-quicker 48:12 by over a minute from 2014’s race. Maybe it was annual nemesis and Stone’s good friend Kevin Tarras’ pressure with a finish just 46 seconds behind, both with late seven-minute-mile paces. 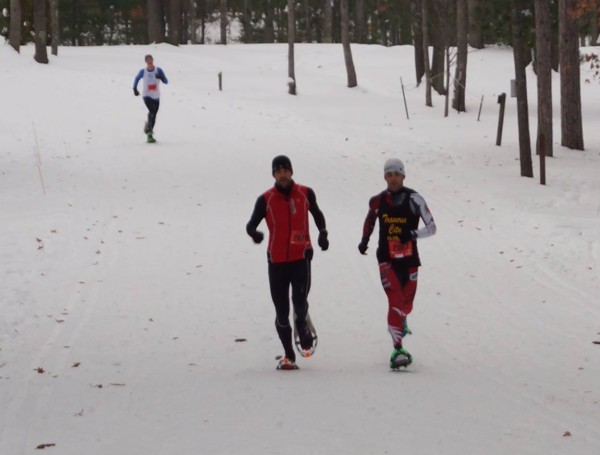 Stone just missed medaling on the last go around when the 2011 USSSA National Championship tour landed in Cable, Wisconsin; fourth in his age group and 17th overall in a quick 46:27 for that highly contested, challenging course. The nationals visit again February 28-March 1, 2015, in Eau Claire.

He certainly displays a resume’ for it with races in the past couple of years like November, 2014, Up North Media Turkey Trot (2nd), a class win for the very swift National Cherry Festival 5km in 17:08, and an overall victory for the Traverse City Trail Running Festival 11km.

Stone told me, “Kevin Tarras is my great friend and training partner. He is the one that got me started snowshoeing and probably wishes he hadn’t. In the photo (see above), that was us coming through the first of two 5 km loops. We ran together approximately half of the second loop taking turns at the lead before I started to pull away.” 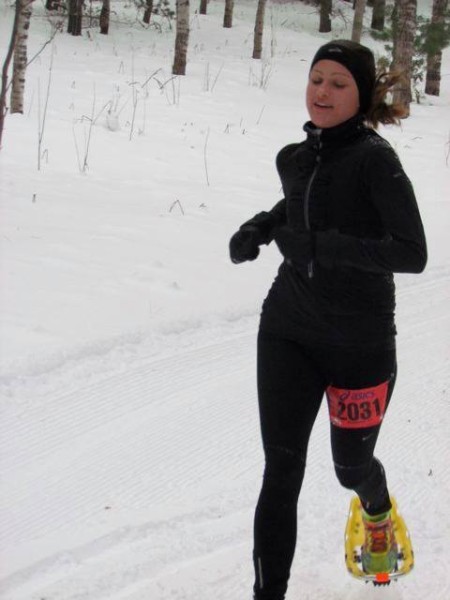 Tarras’ results show he can be a factor at the Eau Claire nationals; his 47:11 at Cable reflects his ability in that speedy race toward the front, 19th overall in 47:11. 2014’s 5km Snowshoe Stomp in Thompsonville found him second overall in 20:21 where he also raced the North Mitten 10 km in 38:48 later in May.

Alison Goss stepped up to the 10km this year to win the women’s class in 1:00:56, ranking tenth overall. At last year’s Boogie, she raced the 5km with a win in 31:16. For her 2014 National Cherry Festival race, Goss completed the 5km in 19:37 for third in class, 11th overall women; note she was only 11 seconds behind a virtual tie for first and second.

Jami Rhodes took the women’s silver in 1:06:35 while Karen Osborn, 2014’s winner, completed the podium in 1:10:09. Both Rhodes and Osborn won their respective age groups. 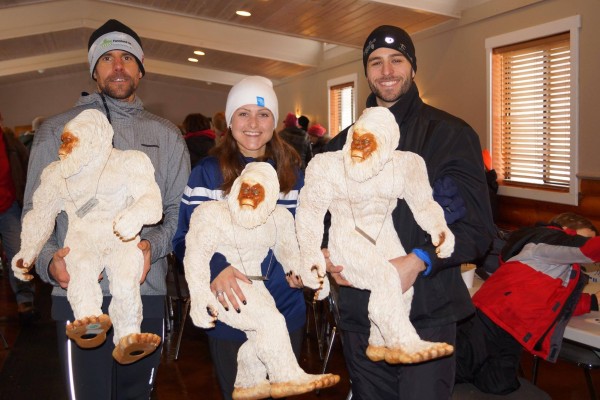 The best winner’s trophies in the sport of snowshoeing?

Special note for the 65-69 men’s class as Richard Magin won in 1:15 while Bill Zolkowski chased him from a little more than a minute back. Both are active in the year-round racing results. Charles Brown wrapped this senior age class with third in 1:34.

The national qualifier wrapped under two hours as Brian Seely crossed the finish in 1:58:39 while Kali Bayes followed seconds later to secure their finishes.

Tam King, 28, wrapped a fast 5km with his 25:31 crossing followed by 2014’s winner, Kevin Deyo, breaking into the 25th minute as a tribute to the over 55 class racers. Zachary Stepanovich trailed for third by just a dozen seconds. 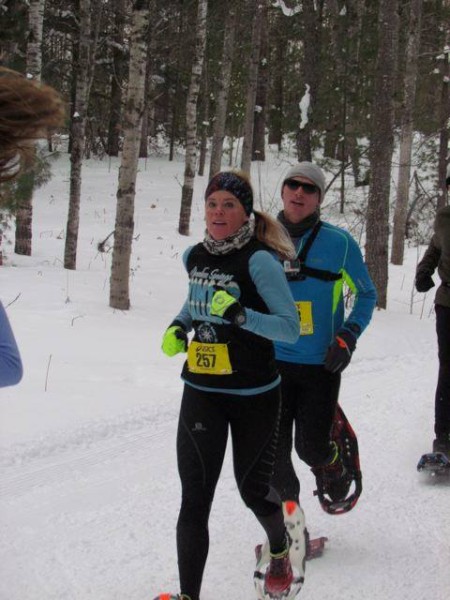 Kim Owens edged out for the overall women’s bronze, but she made the photo in the article; what price glory?

Jamie Grant lead the women’s class podium and eighth overall in 30:20, followed by Alison Flegel’s 33:45 silver and Bonnie Brown’s 36:50 to edge Kim Owens for the bronze. 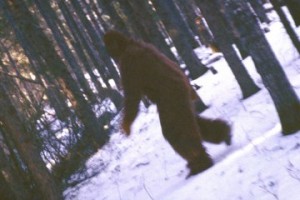 Last known sighting of the race’s namesake . . . now tracking to Eau Claire for the Nationals?

The Big Foot Boogie represents a mix of serious racing and novice entrants. With 100 rental snowshoes, plenty of the 350 or so entrants may be neophytes at the sport, but active in trail or road racing. For the elite—defined as sub-60 minute 10 km, sub-30 minute 5km finishes—the race offers corral options. Described as a “super hilly off trail” course with obstacles such as logs to jump and tree limbs to duck, that the website compares “like a leg of DWD (Dances with Dirt)” race, a competitor has options to move up or back depending on one’s agility. Sounds like big boogie fun in Traverse City.