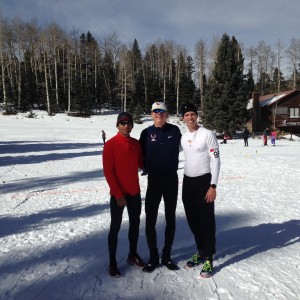 On Saturday, January 24, a small but tough crowd of 19 snowshoe racers gathered for the annual Low O2 Challenge at EFXC, just outside the small mountain town of Red River. Racers completed one or two 5K loops through mixed conifer forest on a relatively fast course that combined packed singletrack and groomed cross-country ski trails.

“This was my first time visiting the Enchanted Forest, and I instantly fell in love with the area,” says Mike Cleveland, who won the 10K. “The trails were in great shape, and the course was challenging; I loved weaving through the trees on the singletrack.”

Rene Sepulveda, who traveled to Red River from California, handily won the 5K in 26:11, using the race a tune up for the 2015 World Snowshoe Championships in Quebec City on January 31. Jennifer Steketee, of Santa Fe, took first in the women’s 5K, finishing in 32:27. 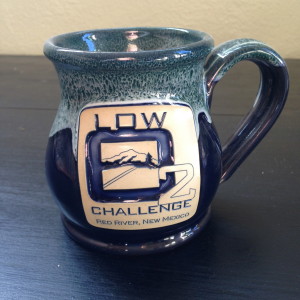 The Under 19 category was dominated by the Colfax family: Hayden, 13, Bailey, 17, and Zoe, 11, who finished first, second, and third, respectively. Their dad, Reed, placed third in the 10K.

Overall and age group winners received Low O2 mugs, and most participants received raffle prizes that included admission to EFXC events. “I will definitely compete in this race again next year, and will probably be back several more times this year to run, ski, and enjoy the area,” Cleveland says. “Definitely a gem of a race and location.”