Devil’s Lake lies in one of Wisconsin’s most scenic and treasured state parks. Its trails take hikers and snowshoers up on quartzite rock bluffs 500 feet above a scenic 360-acre spring fed glacial lake, and through the forested Baraboo Hills. 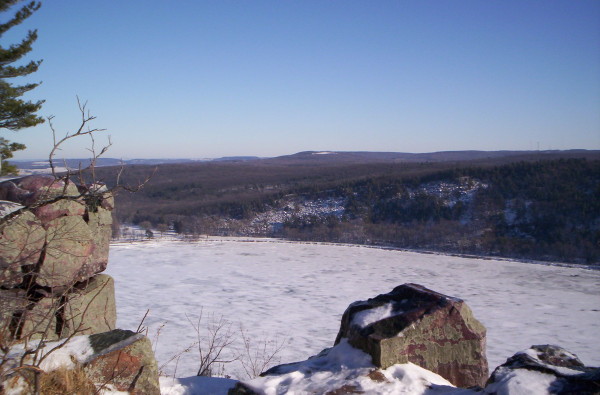 But, why would it be called Devil’s Lake? I am not for sure how devil got into its name. There are a few theories I found from various sources. It may be that the Ho-Chunk Nation of the area named it such, because it was said that voices of spirits were often heard during their celebrations held there. The name they gave to the lake was “Da-wa-kah-char-gra,” meaning “Spirit Lake.”

Another version I found referenced a document of the Smithsonian National Archives dated 1885. It read that a Winnebago was on the bank of the lake offering devotion to the Supreme Being while fasting, when he was told by an animal that he would live a long and happy life. The lake would be called “Sacred Lake,” and pronounced “Ta-wah-cun-chunk-dah.” And another translation is that the Native Americans of the area gave the name “Minnewaukan” to the lake, meaning “Evil Spirit Lake.”

One resource wrote that the Native American meaning was mistranslated by early settlers and visitor. It was also pointed out that around the 1840s, white settlers were calling the lake “Devil’s Lake,” because it was a more interesting name for commercial purposes in bringing curious visitors to the area via the railroad. And yet one other resource cites that Devil’s Lake was given its name due to the fact that it is located in a deep chasm with no visible inlet or outlet (maximum depth of the lake is 47 feet).

Whatever the reason for its name, Devil’s Lake State Park is one of Wisconsin’s 100 state parks, forests, recreation areas and state trails that offer a variety of terrain for hiking and snowshoeing. Two of its trails provide panoramic views of the picturesque lake and forest below. 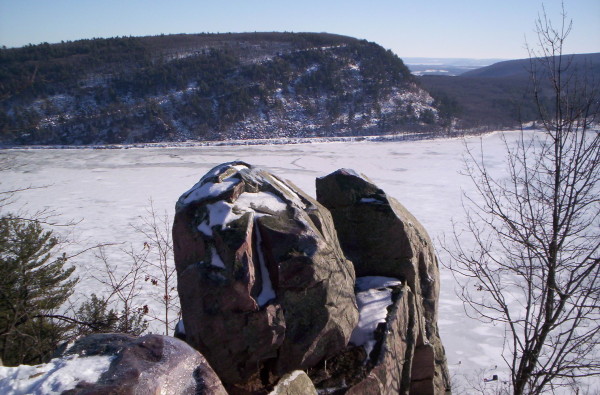 Giant rock formation found on the west side of Devil’s Lake.

Located in south-central Wisconsin, about 35 miles northwest from the state capitol of Madison and three miles south of Baraboo, the 10,200-acre Devil’s Lake State Park offers fun in the sun with swimming, canoeing, kayaking, fishing, hiking, rock climbing, off-road biking and camping to approximately 1.2 to 1.3 million visitors annually. During the winter, 23 miles of hiking trails beckon snowshoers to take the challenge, with nearly 14 of those miles being on the Wisconsin’s 1,000-mile Ice Age National Scenic Trail. And there are also 17 miles of groomed trails for cross-country skiers.

The hiking trail that provided me with great views from high above Devil’s Lake was the 1.4-mile West Bluff Trail (also part of the Ice Age Trail). The trail begins at the southwest parking lot and boat landing, and goes uphill to 500 feet above the ice-covered lake. 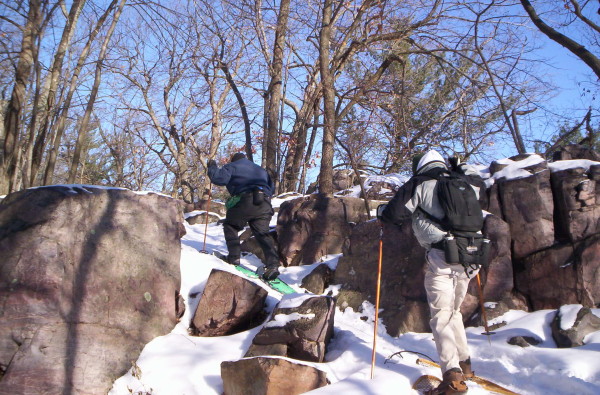 A steep climb up onto the West Bluff Trail.

The climb up is steep until reaching the plateau at the top. It was a huff-and-puff challenge ascending so quickly. The trail then meanders through a mixed hardwood and conifer forest, and along open areas on the bluff overlooking the lake. Found along this trail is Prospect Point, one of a few popular giant rock formations in the park. It is a huge and tall boulder standing upright as if guarding over the lake.

Taking caution is a must if you go this route. Do not attempt to go anywhere close to the edge of the bluff or on rock formations. Snow and ice can cause you to slip. Each year the park experiences either serious injury or death to people who have taken unsafe chances. 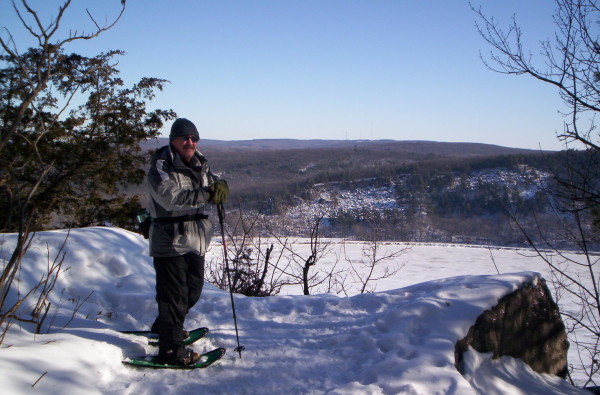 The author atop a rock cliff overlooking Devil’s Lake.

Two options for return to the parking area would be to snowshoe around the north end of the lake and take the 1.1-mile East Bluff Trail or the 1.3-mile East Bluff Woods Trail that goes through a forest blocking the view of the lake. The trails around the lake would be a 3.5- to 4-mile hike depending on the return trail of choice.

The third and easiest option is to take the 1-mile Tumbled Rocks Trail that goes along the west shoreline of the lake and ends at the parking lot. Using this return option would make the hike about a 2.5-mile loop. On this particular adventure, I took this easy route… and I am glad I did. I was able to see magnificent talus slopes of mega-sized quartzite boulders that over time tumbled down from 400 to 500 foot heights. 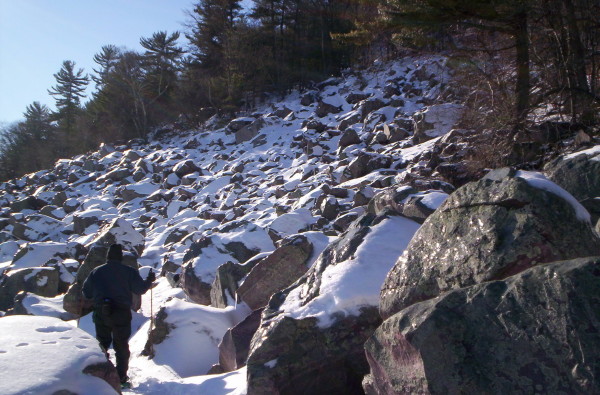 Hiking past quartzite talus on the Tumble Rocks Trail.

I also walked among huge boulders bordering the lake. In my journal I wrote, “On most of the trail were large boulders along the shoreline that were glimmering from the south sun shining off the ice and snow on boulder tops, giving an illusion of walking through a giant diamond field.”

The park is open year-round from 6:00 a.m. to 11:00 p.m. Although normally winter camping is permitted, the campgrounds are closed for the off-season this year due to development projects. But it will reopen by the 2015 Memorial Day weekend. An annual or daily Wisconsin State Park Vehicle admission sticker is required. 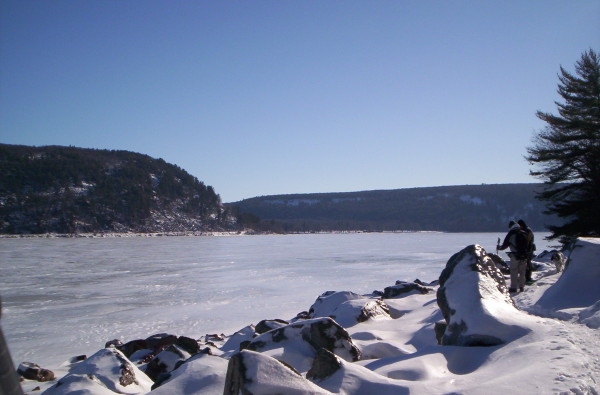 Like snowshoeing through a giant diamond field along Devil’s Lake west shore.

For visitors to Wisconsin, Devil’s Lake State Park would be a welcoming start to any snowshoeing adventure in the Midwest. There are numerous other opportunities in this dairy state to snowshoe, but why the devil not start at Devil’s Lake?

Check out historical resources cited at: 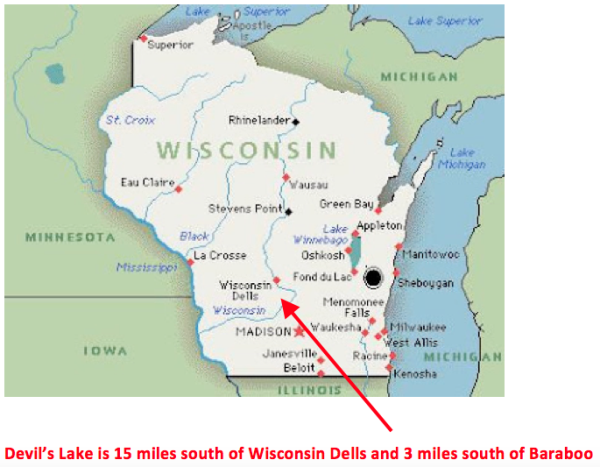