If snowshoe racing is tough, then snowshoe racing in northern New Mexico is really tough. Not only are you trudging over snow-covered trails with an extra couple pounds strapped to each foot, but you’re doing it at almost 10,000 feet—an altitude that will slow down even the most hardcore athletes.

Yet, every year the Santa Fe Snowshoe Classic manages to attract dozens of runners and hikers who tackle its mountainous terrain just a few miles from Ski Santa Fe. In 2014, the Santa Fe Striders, the local running club that hosts the event, debuted a new 3.5-mile course that starts and ends at the Big Tesuque Campground; racers complete a counter-clockwise loop via the Big Tesuque Trail, Pacheco Canyon Road, and the Winsor Trail that incorporates 610 feet of climbing.

The tough course was no match, however, for 38-year-old Hadji Corona, who led the 2015 event from the start to win his third consecutive Snowshoe Classic. His time of 32:10 was nearly two minutes faster than Zach Shriver, who placed second in 34:08.

The women started five minutes after the men with similar results: Whitney Spivey, 31, took an early lead and came in at 38:14, more than six minutes ahead of second-place finisher Shirley Van Slooten. “Most impressive, however, were two young girls, ages 13 and 10, who took fifth and sixth place, respectively, in a field of 40 women racers,” says Race Director Kris Peterson. “They just flew around this tough course!” 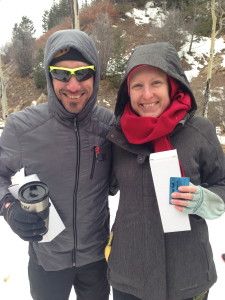 Of the record 82 participants, many had never snowshoed before. Despite several bare patches along the course, snow conditions were good, and first-time racers were treated to a well-organized event with Search & Rescue volunteers at every turn and plenty of hot chocolate and cookies afterward. “Having never run in snowshoes, I was admittedly nervous not knowing what to expect,” says Mike Cleveland, who went on to place second in the 30-34 age group. “However, any worries were quickly alleviated by the combination of excellent race volunteers and the friendly and spirited personalities of the participants. I enjoyed the challenging course and quality of competition, but, most importantly, the vibrancy and optimism of the fellow racers.”

“I love providing this race to the community,” Peterson says. “I am really pleased so many came out and enjoyed the race.” 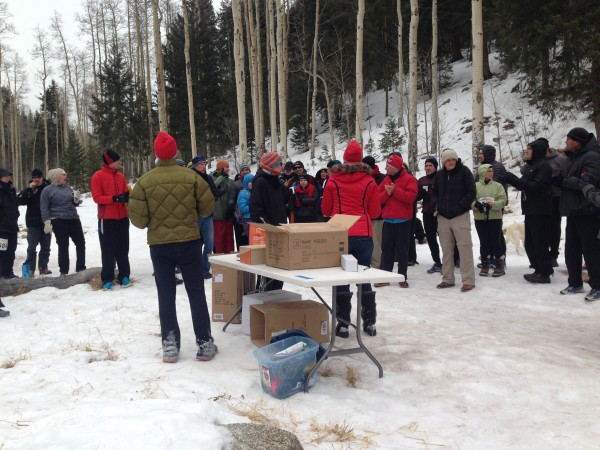 Participants and spectators gather for the awards presentation at the 2015 Santa Fe Snowshoe Classic.

A version of this article appeared in the January 1, 2015 issue of the Santa Fean NOW magazine.