A three-inch fresh coating of dry, drifting snow greeted racers at the third Moose Tracks Snowshoe Race on Sunday,  January 4, 2015. Winter wonderland conditions existed anyway with 18 inches on trails and much deeper in the woods. This 10 km race opens the new season of qualifying for the United States Snowshoe Association’s national championship just 160 miles away in Eau Claire. 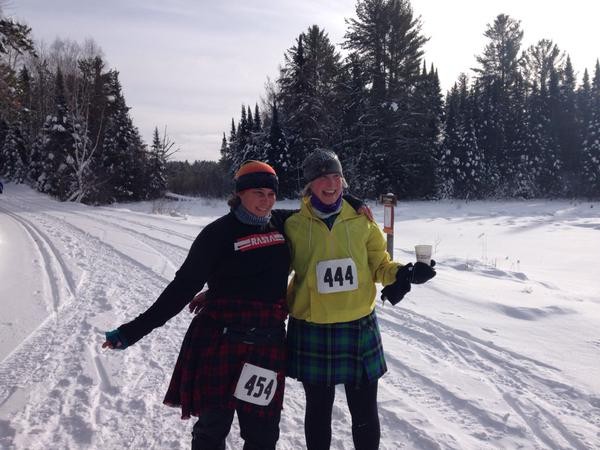 Amy Laxton, Rhinelander, and Sarah Steele, Woodruff, celebrate a tag-team finish as each won her class while finishing together in 1:41:01.

Mike McPherson, Michigan, scored the win in 51:21 as fellow Great Lake State resident Kyle McGurk followed a minute-and-a-half later for the silver. The Braveheart “Mc,” Jim McDonell, Minnesota, took third in class. Moose Tracks is one of the Braveheart Snowshoe Series, one of the country’s largest. 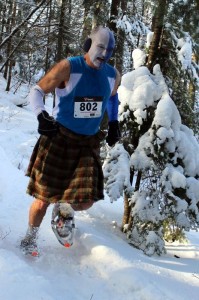 Minocqua Winter Park rates tops in activities for outdoor winter fans. With 3,200 acres of forested winterscapes, activities for the entire family abound. In addition to snowshoeing trails—a 7 km “Snowstomper” loop plus the 4 km “Breaking Free” loop—the park offers cross-country trails, races, hill tubing with loads of conviviality. Follow Braveheart’s lead around Yukon Swamp, then along the Squirrel River, searching for those moose tracks. Stop by the new Tea House for refreshment then land at the Chalet to call it a great snow day.